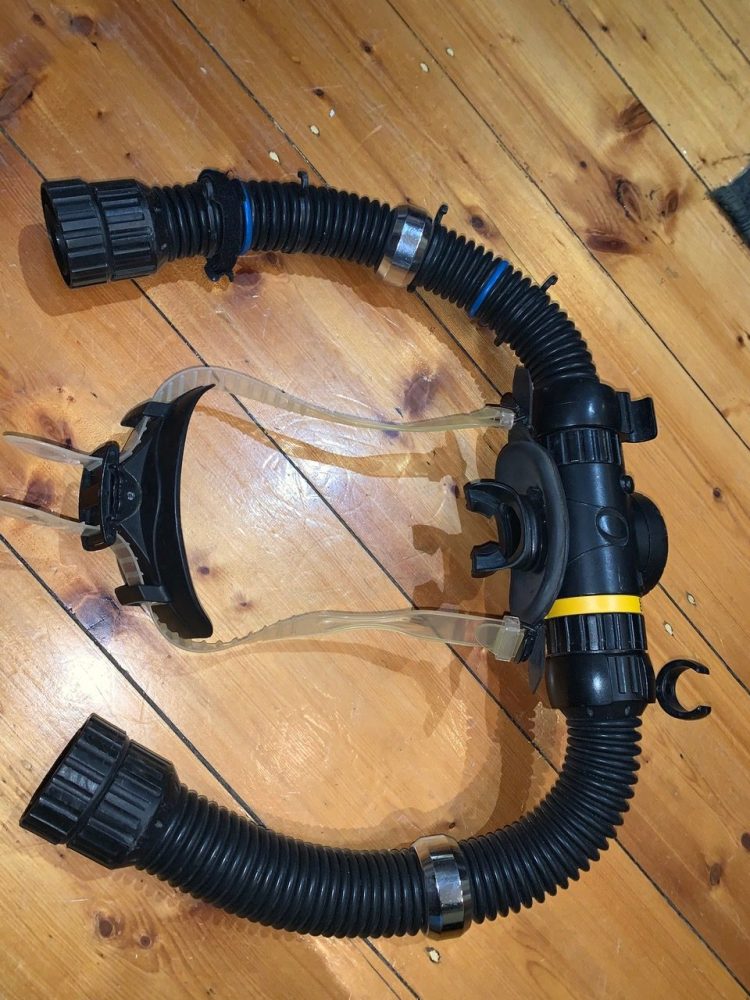 We surveys CCR divers from around the world. Here are the results.

Where do Agencies and Manufacturers Stand on Mouthpiece Restraining Straps?

I will admit to being quite floored when Michael Menduno asked me to offer an opinion on mouthpiece restraining straps (MPRS), as I considered this subject fairly done and dusted. But then I guess I should not have been totally surprised given that when I provide medical support on Pete Mesley’s Truk trips I still see few people using them. The recent death of a colleague of mine who drowned after becoming unconscious underwater without one brought this matter back for discussion once again.

An analysis of CCR related deaths shows that the vast majority of them are due to either hyperoxia, hypoxia, or CO2 retention.(1) This situation does not seem to have changed over the years, although fortunately the number of fatalities seems to be low. In each case, the primary cause is not immediately fatal; however, the consequence of each one is usually unconsciousness with the loss of the CCR mouthpiece from the mouth. In the aquatic environment, water not being a respirable medium, the result is usually fatal.

The obvious solution would therefore seem to be to use a full face mask (FFM), and indeed, if applied properly this would prevent drowning in the event of unconsciousness as has been attested to by many commercial and military divers. Unfortunately, nothing comes for free, and in the tech diving world, where we are observation divers rather than working divers, FFMs usually come with a reduced field of view and are difficult to bailout from should there be an issue with the CCR (in itself an extremely rare event). They also make gas switching more difficult, although I would hope that that old chestnut has also gone the way of the dinosaur!

So, if FFMs are not so good, then is there an alternative that can allow easy bailout but still save a life in the event of the diver becoming unconscious?

The only large study looking at this was conducted by the French navy and was published in “Military Medicine” in 2011 by Gempp et al.(2) This study looked at accidents on Rebreathers between 1979 and 2009. The number of accidents reported was 153, of which gas toxicities were thought to be responsible in 68% of cases, and loss of consciousness was reported in 58 cases.  Despite this, there were only three fatal cases, all of which were caught in wrecks. All divers used a MPRS with a lip guard. This is in stark contrast to the civilian CCR deaths, where unconsciousness while underwater is almost universally fatal. It is also poignant to note that military divers always dive in pairs so that it is possible for the unimpaired diver to recover his unconscious buddy.

So, is this study only relevant to military combat divers?

While all the divers in the study were military, not all were using oxygen rebreathers and, in any case, the point is that in 58 cases where a diver became unconscious underwater, none of the divers who were not trapped drowned. To me this is a pretty compelling case for the use of a MPRS with a lip guard.

A range of arguments are often put forward as reasons not to use MPRS. One is that if the diver convulses then you cannot take them off O2. This is just silly. First, during a convulsion the mouthpiece almost always comes out of the mouth if there is no MPRS. From the multiple case reports I’ve read, there are very few cases where the buddy was able to place an alternate air source successfully in the diver’s mouth and reinitiate breathing. In most cases, the victim was sent to the surface where they died of drowning and severe DCI. Had a MPRS with a lip guard been in place, the CCR could have been flushed with diluent, and the diver kept at depth without the buddy having to worry about maintaining the airway.

The next argument against MPRS is that they make emergency bailout or gas switching more difficult. The most common version of the MPRS with built in lip guard is the Draeger type. This comes with a rubber head strap. It is undeniable that this head strap can be difficult to adjust for comfort, and when properly fitted, can also be difficult to doff (especially without dislodging the face mask). In contrast, the MPRS built by AP Diving is very easy to adjust, easy to don and doff, and due to the very elastic silicone straps, is very easy to remove in an emergency. However, as it lacks the lip guard, it is also less than ideal. The ideal in my opinion, is a combination of both, utilizing the lip guard of the Draeger system with the strap of the APD system. The added advantage of this combined system is dramatically increased comfort and reduced jaw fatigue during long decompressions.

I’ve been using this system for almost a decade now and would not dive any other way. There seems to be no downside to a system like this, and it might just save a life, so why would you not use one?

Dr Andrew Fock MB; BS, FANZCA, Dip AdvDHM(ANZCA), Dip DHM(SPUMS), is Head of Hyperbaric Services at the Alfred Hospital, Melbourne Australia. Andrew’s primary specialist training is as an anesthetist, completing his fellowship in cardiac anesthesia. While still maintaining a private practice in anesthesia, Andrew took up a VMO position at the Hyperbaric Unit in 2004, subsequently gaining his diploma in Diving and Hyperbaric Medicine with his thesis in Decompression theory and Deep decompression stops.

He is widely published in the peer-reviewed diving literature and is a regularly- invited speaker to both scientific hyperbaric meetings and diving industry conferences around the world. He was a board member of the Divers Alert Network Asia-Pacific and is a senior medical advisor to the DAN Australasian diver mortality study. He is an active technical mixed gas diver and has led a number of diving expeditions to shipwrecks around the world to depths in excess of 130 msw. He also holds a commission in the RANR, providing expertise in the areas of Diving, Hyperbaric and Submarine medicine to the ADF. He is an Adjunct Senior Researcher for the School of Public Health and Preventative Medicine Monash University.

Where Do Training Agencies and Manufacturers Stand on Mouthpiece Straps?