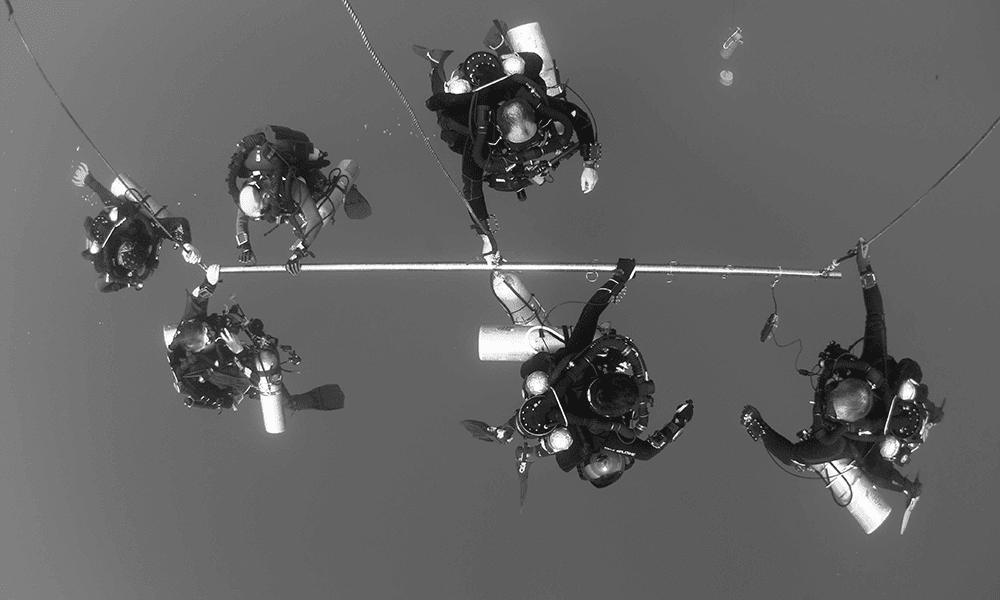 Depending on who you ask, in-water recompression (IWR) is either a critical life-saving tool for experienced divers or a fast-track to becoming a case report. Casually dropping it in conversation is a great way to make hyperbaric medicine experts froth at the mouth, and it’s the stuff that insurance underwriters have nightmares about. Putting a diver back in the water after a serious injury is not something to be taken lightly. Managing the diver requires significant training and equipment, as well as the training to diagnose a diver before treatment and manage them and any possible complications afterwards.

Even in ideal conditions, recompression (in-water or in a chamber) is not guaranteed to eliminate or even ameliorate symptoms, and there’s a very real possibility that divers may exit the water in worse shape than when they entered due to oxygen toxicity, natural symptom progression, or further exposure to the elements. Despite all of this, the practice has been saving lives in some of the world’s least hospitable environments for decades, and recent research has shown that there may be even more reasons to consider IWR.

At the recent International Rebreather Meeting in Ponza, Italy, Simon Mitchell, Ph.D., presented a new take on IWR taken from In-Water Recompression, a paper he recently published with David Doolette, Ph.D. The pair propose that IWR may be the best option in a much broader array of situations than previously thought, and that it should be applied in situations where a diver is at risk of losing life or limb, a chamber is more than two hours away, and the team is appropriately trained and equipped for the protocols.

First, a little background: IWR tables vary, but most modern protocols involve administering oxygen at 30 fsw/9 msw for one to three hours. Historically, these protocols have varied widely, from the use of oxygen down to 60 fsw/18 msw to “deep air” spikes down to 165 fsw/50 msw. The supporting evidence underlying these practices and the extent of testing also vary widely. Up until the last decade or so the practice was considered foolhardy at best and dangerous at worst by most experts, and was reserved as a tool of last resort for divers who got bent in areas where recompression in a chamber wouldn’t be possible for days.  At the time, the leading researchers were working under the assumption that delay to recompression had little or no effect on post-treatment outcomes, and both the logistics of sourcing open-circuit gas supplies and managing oxygen toxicity risk made it difficult enough to organize that most experts avoided broaching the subject.

In the past decade many of these concerns have found technological workarounds or have seen a reversal in best-practices. Increasingly, injury data is showing that minimizing time to recompression is key to positive outcomes in cases of decompression sickness (DCS) of all types, and the difficulty of providing oxygen to divers has diminished dramatically with the proliferation of rebreather use. IWR today may just require an injured rebreather diver and their buddy to reenter the water and clip into a hangar with an extra cylinder of oxygen and some way to maintain a patent airway (via full face mask, mouthpiece, or gag strap). Our understanding of oxygen toxicity and the applicable risk factors has improved, as has our ability to diagnose and manage serious DCS, but the combination of factors seems to have come together without much notice until Mitchell and Doolette took on the project of standardizing and promoting a procedure.

Citing retrospective analyses of military and experimental dives that showed complete resolution of DCS symptoms during the first treatment (and often within minutes of initial recompression) in 90 percent of cases, the two advocate strongly for a delay to recompression of less than two hours. Realistically, a promptly diagnosed condition and initiated IWR protocol could have a diver back under pressure in half that time or less, but there is little research into whether recompression in that short period notably improves outcomes. The primary protocols outlined in the paper involve the use of oxygen for one to three hours at 30 fsw/9 msw, a notable departure from what most non-commercial and non-military divers are used to in terms of oxygen exposure, but they are widely accepted and have significant research backing.

In addition to the hazards of CNS oxygen toxicity, convulsions in the water, and symptom progression in a difficult environment, Doolette and Mitchell highlight both the inability to further evaluate patients in the water and the lack of applicable medical interventions. IWR is not a cure-all, nor is it something to be undertaken on a whim, but it has been a viable option for decades for those appropriately trained and equipped, and it’s refreshing to see those at the forefront of the industry promote the evidence-based practices we need in order to save divers in extreme situations.

From the editors: If you and your team are diving in remote locations, you might consider getting the appropriate equipment and training (or training yourselves) to conduct an IWR protocol in the field. Here are some additional resources:

aquaCORPS (1993): In-Water recompression As An Emergency Field Treatment for Decompression Illness by Richard L. Pyle and David A. Youngblood

Sizing Up The China Diving Market