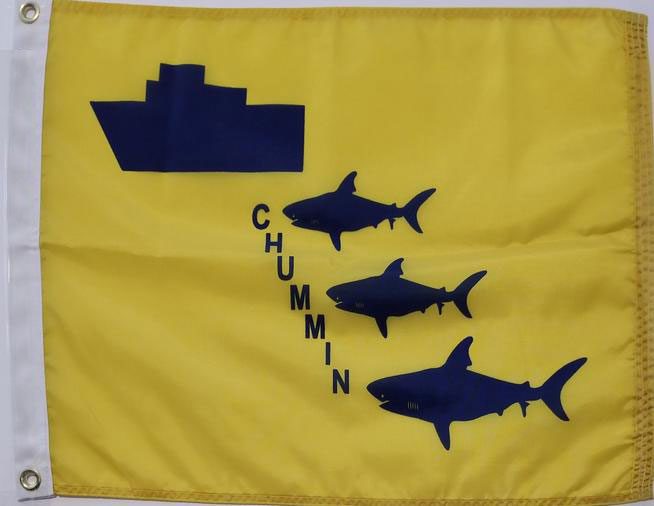 The diving industry has always been an innovator when it comes to safety, including the establishment by the International Maritime Organization of the two dive flags in the 70’s. The Chumming Flag was created in March 1997 when a caller to a fishing radio show asked, “How can you tell when a boat is chumming?” answer: look for a sheen on the water caused by the chum slick. That’s when the idea of establishing a code flag for chumming was inspired.

Establishing a code flag for chumming makes a simple & effective way to inform others that sharks are being lured to the area in search of food. Caution should be used when entering the water because there is a greater chance of encountering sharks that are aggressively in search of food. The need to establish a code flag for this activity has its merits from accidents that could have been avoided by an official chumming flag.

Examples have been documented. In 2001, a beach diver entered the water while on vacation and lost his leg in a shark attack only to find out later that chumming was the reason sharks were in the area. Also in 2019, a young woman who was snorkeling was attacked and killed by three reef sharks in front of her family, and, after an investigation, it was determined the attack was caused by another boat activity chumming nearby. Both of these incidents could have been avoided by the simple use of a standardized chumming flag.

The chumming flag colors yellow/blue are the same colors as the nautical flag meaning “steer clear,” and the diagonal pattern is easy to see at a distance. Using a pictograph design makes it universally easy to understand for quick recognition and for the IMO to adopt a proposal, it needs to be submitted by a member state for consideration. This is a process that will take time and will require the dive and fishing community to embrace this simple, effective, and traditional solution that can easily save someone’s life.

If this endeavor interests you, and you would like to help in the establishing a standardized code flag for chumming in order to reduce shark accidents globally, it can be as simple as sharing this idea with others and for all the shark diving operators that use chum as part of their business model. It is a low-cost safety device that can reduce your liability risk of an accidental shark encounter.