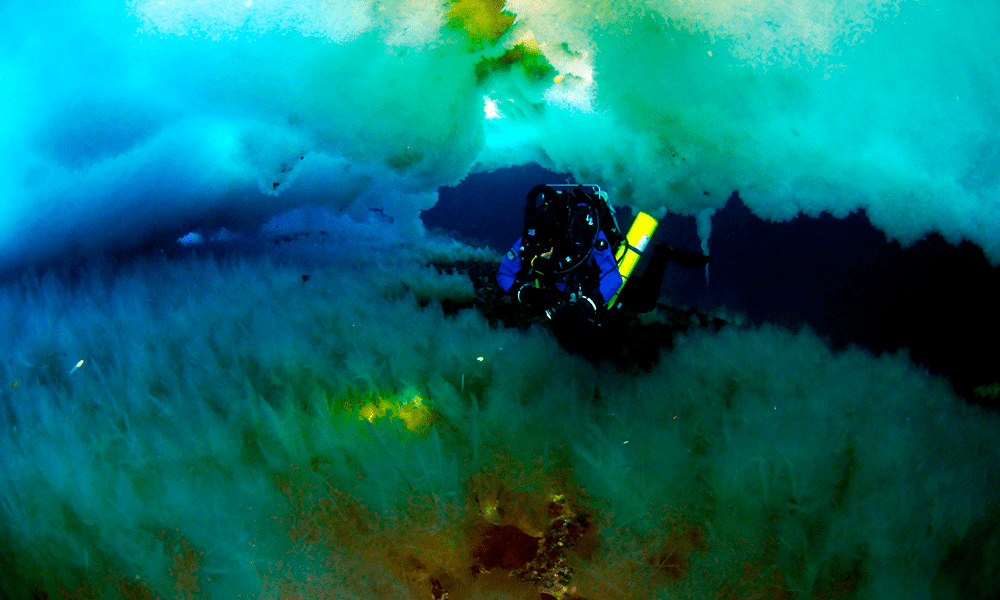 Do rebreathers work in ice-cold and even colder air at the surface? Those are the questions that research scientist at Jacksonville University Marine Research Institute and veteran diver John Heine sought to answer in a 2016 study funded by the National Science Foundation (NSF), which oversees the U.S. Antarctic Program (USAP), including scientific diving.

“We had an increasing number of queries from researchers that wanted to use rebreathers in the Antarctic,” Heine, who is the Diving Safety Officer for USAP and a member of its Diving Control Board, explained. “The problem is we couldn’t answer the [fundamental] question: will they work or would it be too risky? So, we decided to evaluate a number of rebreathers to see how they performed.” The results of the study were published last year (see 1).

Scientific divers, who operate under an exemption from the Occupational Safety and Health Administration’s (OSHA) commercial diving regulations, have been diving in Antarctica since the 1960s. However, the exemption requires that diving operations be approved by the relevant institution’s Diving Control Board (DCB), in this case USAP’s, which has limited diving to open-circuit scuba. Though there have been a few non-scientific rebreather operations conducted in Antarctica, including the Wes Skiles 2002 Ice Island Project with explorer Jill Heinerth, and a Disney wildlife filming expedition on the Peninsula, these have been poorly documented.

The performance of open-circuit scuba equipment in freezing water is well known. Relevant equipment is regularly tested by the U.S. Navy’s Experimental Diving Unit (NEDU) and within the USAP, and certain regulators, such as the Sherwood Maximus, that perform well in icy conditions, have been approved for use by scientific divers.

Not so for rebreather technology. NEDU presumably has extensive knowledge of the use of rebreathers in cold water—it’s known that Navy Special Forces divers lock out of submarines in arctic waters. However, according to Heine, they won’t(or are unable to) discuss their experience or share data. In fact, as I learned when I did a profile of the NEDU for Alert Diver magazine a few years ago, they don’t even like to acknowledge that sailors dive from submarines.

Putting Rebreathers To The Test

Due to their silence, lack of bubbles, and extended range, an increasing number of scientists have employed rebreathers in their research, albeit in warmer waters, over the last two decades. Not surprising, there are also numerous potential scientific applications for rebreathers in the frigid depths of Antarctica.

These include wildlife behavioral studies, under-ice collections and sampling, and use in the McMurdo Dry Valley lakes to minimize mixing of water layers and adding exhaled gases into the environment. There are also the potential benefits of extending divers’ time and depth underwater, and of course breathing warm, recycled gas as compared to open-circuit scuba.

However, there were many unknowns. Rebreathers are typically tested at temperatures down to 39.2° F /4° C for CE certification. But that’s a big difference with the sub-freezing 28.6° F /-1.8° C water temperatures found in Antarctica, where air temperatures typically average -20° F/-29° C. Heine, who made his first Antarctic dives in 1989, and has subsequently spent 14 seasons on the ice, was concerned about the impact of the cold on the scrubber’s CO2 absorption efficiency, as well as freezing in the loop due to moisture, battery duration and function, display irregularities, accuracy and precision of all readouts and sensors, and potential solenoid and regulator issues.

Heine and his team, which included Dr. Jeffrey Bozanic, author of several books on rebreathers, tested the performance of seven rebreathers, specifically the AP Diving Inspiration, Inner Space Megalodon Legacy and Megalodon 15, the Poseidon Se7en, the Hollis Prism 2 and semi-closed Explorer rebreather (see footnote 2), and Expedition One’s Titan. Their goal was to evaluate the overall performance of regulators, valves, batteries, and displays both pre-dive and underwater, measure temperatures in different parts of the loop before, during, and after dives, and to evaluate the performance of the rebreathers’ scrubbers. They placed temperature sensors in various portions of the loop to quantitatively measure the temperatures over time.

Heine’s five-person dive team conducted a total of 116 no-stop dives to a maximum depth of 130 ft/40 m on the seven rebreathers during the austral summer season in Antarctica (Oct-Nov 2016). The average depth of the dives was 85 ft/27 m, with an average dive time of 33 minutes, for a total of nearly 66 hours. They used air diluent in the rebreathers; low setpoints were 0.5 or 0.7, and the high setpoints were 1.2 or 1.3. Divers were equipped with 40 ft3/5.5 L bailout cylinders, which were also used for drysuit inflation. They also had a safety diver on open-circuit, and surface tender(s).

The dives were staged from a heated hut, with a temperature of approximately 60° F/15.5° C, and a water temperature of 28.6° F/-1.8° C. The rebreathers were pre-breathed in warm air, either in the dive locker or in the heated hut. Pre-dive checklists were performed on all of the units.

Most dives were conducted in no current and were characterized as “low activity level.” The scrubbers were only used one-half of the manufacturer recommended time (at 4° C) on the advice of Scientist Emeritus and Retired Scientific Director of NEDU Dr. John Clarke, who sits on the USAP Diving Control Board. “Our dives were rarely longer than 40 minutes,” Heine said. “The limiting factor was the cold, and in some cases decompression, not the scrubbers.”

In addition, they performed dry tests where the rebreathers were pre-breathed in a warm shed or in cold ambient air temperatures of 5° F (-15° C) and then left in the cold for a period of two to three hours. Temperature data from the various portions of the loop were recorded and analyzed, along with qualitative observations on the function of the units. “It is eye-opening how fast things freeze up in air,” cautioned Heine, who was first certified in 1976 in Laguna Beach, CA.

The Se7en, for example, had a few problems with its (galvanic) oxygen sensors; the automatic diluent valve (ADV) on the Inspiration had probable “freeze-ups” on two occasions, and the Explorer had a number of issues with the electronics, including a “bad cell” warning.

These results compare with a 2017 study of open-circuit regulators (see footnote 3). Seventeen models of regulators from 12 different manufacturers were tested in Antarctica and yielded 65 free-flows in 305 dives (21.3%). By comparison, the USAP-authorized Sherwood Maximus regulators had a free-flow rate of only 0.17% during the period of 2007-2017.

The batteries and displays functioned well, except in very cold air temperatures of 5° F/-15° C. In the dry test runs in cold air, scrubber temperatures stayed relatively warm, but temperatures in the lids near the oxygen sensors were below freezing, which is not recommended by the manufacturer. Mouthpieces also froze shut.

Note that gas temperatures being delivered to the diver in open-circuit systems would most likely be less than the ambient water temperature, due to gas expansion and pressure drop from the second stage pressure of 150 psi above ambient to ambient. So, all CCRs delivered “warmer” gas to the divers compared to open-circuit, but generally not to an appreciable level. Heine believes that adding insulation materials to the canister and breathing loop hoses and/or counterlungs might help in keeping the breathing gas warmer.

As a result of the study, Heine is now incorporating the use of rebreathers into USAP’s diving standards. A first group of rebreather divers from the BBC, who will be filming seals, is expected next season. There will also likely be a project studying diatoms, which grow beneath the ceiling of ice and are easily disturbed by bubbles.

Note: Unfortunately, Global Underwater Explorers (GUE) divers planning to participate in GUE’s 2021 Antarctica Expedition will need to leave their rebreathers at home. The trip will be limited to open-circuit diving only, unlike Heine’s diving scientists.

2. Huish Outdoors acquired Oceanic and Hollis in 2017 and discontinued the Explorer semi-closed rebreather.

Authorized for Cold Water Service: What Divers Should Know About Extreme Cold: https://johnclarkeonline.com/tag/en-250/

Michael Menduno is InDepth’s executive editor and, an award-winning reporter and technologist who has written about diving and diving technology for 30 years. He coined the term “technical diving.” His magazine “aquaCORPS: The Journal for Technical Diving”(1990-1996), helped usher tech diving into mainstream sports diving. He also produced the first Tek, , and ASIATek conferences, and organized Rebreather Forums 1.0 and 2.0. Michael received the  Excellence Award in 2011, the EUROTek Lifetime Achievement Award in 2012 and the TEKDive USA Media Award in 2018.

Announcement: Project Baseline to become its own organization