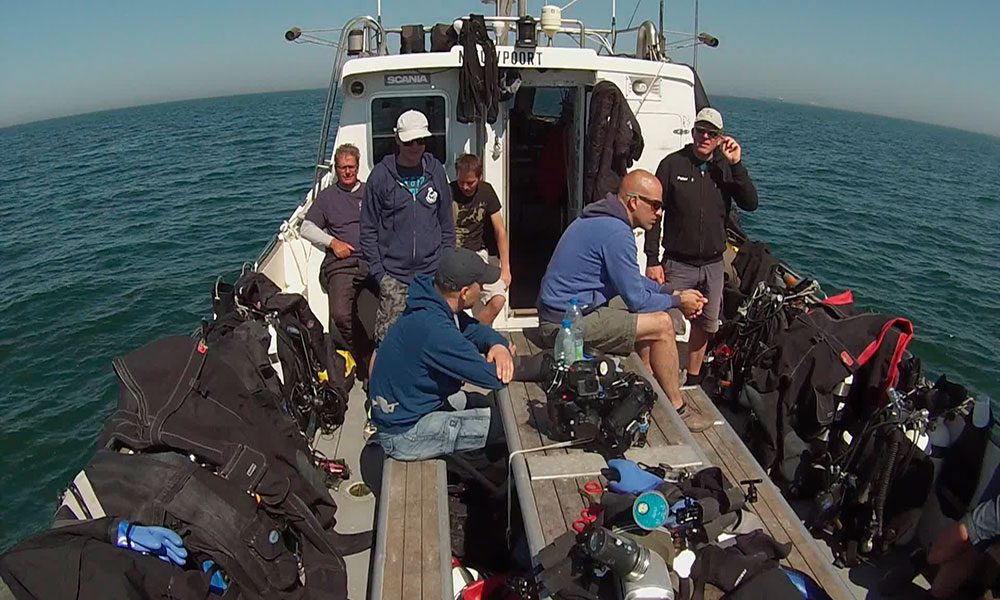 One of the great aspects of diving is building a community of friends that share your excitement for the underwater world. Global Underwater Explorers (GUE) has helped to promote this enthusiasm with students and instructors by encouraging them to join a community in their area or start one themselves. Creating communities like these helps to grow the number of opportunities to get in the water and helps build members’ confidence and skills underwater. Not to mention it’s just plain fun!

One community leading the charge to give its members the underwater opportunities they crave is GUE Belgium (BE). GUE-BE is a non-profit organization that provides GUE divers from Belgium, nearby Netherlands, and France with a community of like-minded divers. Their main goal is to bring divers together to have fun regardless of their experience and certification level. The community plans dives and projects as a stepping stone to helping divers gain the experience necessary to participate in the “big exploration projects” conducted by GUE heroes.

“GUE diving is about team diving and enjoying more of your dive,” President of GUE-Belgium, Ben van Asselt said, “We [GUE-BE] try to give our members the opportunity to participate in projects. Maybe they’re not the famous big push-dives or deep exploration, but by getting involved in these projects, our members can experience how cool project dives are, and they can collaborate within their own personal boundaries.”

The GUE-BE community engages in various types of projects to meet the desires of their 50+ members, offering everything from wreck documentation to conservation initiatives such as Project Baseline and Ghost Fishing.

Over the past few years, they have focused on creating opportunities for BE divers to participate in shipwreck documentation efforts. To promote learning, they encourage participation for all certification levels. They organize teams to balance experience levels so that they can still meet their project goals while allowing everyone who is interested to participate. The community has also developed internal training with a specific syllabus addressing the unique requirements for diving in the North Sea. GUE-BE also does a weekly training in fresh-water lakes so members can practice their diving skills such as: Surface Marker Buoy (SMB) deployment, ascending skills, s-drills etc.

“At the beginning of the season our key-project members arranged a nice training session where skills such as video and photo could be practiced,” van Asselt said. “Also they discussed how to approach and accomplish the goals of the various projects.”

The first major product that the GUE BE community undertook was a  wreck documentation contest in Croatia a few years ago. “We documented the wreck Varese and built a complete informative website about her,” van Asselt said. “It’s a great tool for divers to prepare for their dives, but it’s also a good reference for non-divers that want to know all about wrecks that lie on the seafloor.”

In 2017, their team did a project on the wreck the Westhinder after receiving government approval from the agency protecting shipwrecks in the North Sea. “Our goals were to create a 3D model, a documentary, and a website,” van Asselt explained. “The results were bigger than we could have expected. We experimented with photogrammetry techniques and created a full 3D model of the wreck. Our work was featured in GUE’s QUEST.”

They completed the Westhinder wreck project in six trips with 120 dives, and 480 filming minutes to get all of the necessary footage (an average of 40 minutes of filming time per trip). As a result, the team created a 3D model of the full 30m/100 ft long wreck.

After they completed the Westhinder project, the board, as well as key project members, were invited to meet with the Belgium ministry that is responsible for protecting the North Sea.

“It was an interesting meeting. The ministry was fascinated by our style of diving, the way we approached the project, and the results, but a real collaboration was not possible on the Westhinder. Though the outcome may sound negative, they gave us contacts that could help us with future projects.”

GUE-BE’s most recent project in 2018 took them to the wreck of the SS Kilmore, a wreck that was three times larger than the Westhinder and provided a new set of challenges for their community to deal with. The project was spearheaded by two GUE-BE members, Johan Wouters and Peter Brandt.

Interestingly, the Kilmore was a British cargo ship that sank close to the location of the lightship Westhinder on the morning of July 29, 1906. Note: a lightship is a ship that acts like a lighthouse in deep water. She was on her way from Antwerp to Liverpool with a load of pottery from a factory in Sarreguemines (the north of France). While the ships were trying to pass each other, there was a misunderstanding, resulting in the Montezuma hitting the Kilmore on the starboard side. The Kilmore sank within the hour. Her crew was rescued by the Montezuma.

The divers who participated in the Kilmore project were volunteers who paid for their own gas and boat fees. A single trip to the wreck costs about 150 euro per person. However, the GUE-BE board reserves and pre-pays for a full boat with 12 divers. This requires organization and communication with participants in order to make sure the costs will be covered.

For this particular project, the team wanted to publish the protected maritime heritage wreck with 3D videos and photos. “A lot of people think that doing a project such as the SS Kilmore is all about diving, but to be honest that’s not true. Running a project like this involves plenty or non-diving activities; for example, preparation, post-processing, and keeping project members motivated.” van Asselt said.

What is special about the Kilmore is that it has been lying on the bottom of the North Sea for 100 years and is protected as a maritime heritage site by the Belgium government. This classification prohibits fishing activities and anchoring on the wreck. It is also illegal to take anything from the wreck (take pictures, leave only bubbles). Luckily for the team, the Belgium government created an online system where divers can register 24 hours prior to diving. The team leaders had to make sure that their divers were registered online for each trip, otherwise, they could not participate.

The project also faced some challenges, as the North Sea is not known for calm waters. The team faced unpredictable weather and visibility and could not know the specific circumstances until they were on site. Fortunately, GUE-BE was able to collect everything they needed to tell the story of the Kilmore. You can learn more about the history of the ship and see the teams work here.

The SS Kilmore project was completed over only eight dives in four trips, which means approximately 320 minutes of footage of the wreck. Because of its size (90m/295 ft) as well as weather problems, it was much more difficult for the team to complete their goals than it was on the Westhinder. “We decided to experiment with a multiple camera setup to cover more distances, and we focused on the key elements such as the engine, bow, stern and boilers. We also got all the sonar data so we could make an accurate basic model on which we could paste all the details, which worked out pretty well,” van Asselt explained.

After the diving, there was still substantial work for the team to complete. The computers take hours, days, weeks to process the images and footage to create a 3D model, and there was a significant amount of research to be done to learn about the full history of the ship. Unfortunately, there was very limited information about the Kilmore to be found, but they were able to gather enough information to sketch out the history of the ship for the website and documentary.

The team would like to thank Agisoft for their support and free official licenses to use their software to create the models of the wreck.

Looking for a diving project to get involved with? Check out the GUE Project Calendar.

Amanda White is an editor for InDepth. Her main passion in life is protecting the environment. Whether that means working to minimize her own footprint or working on a broader scale to protect wildlife, the oceans, and other bodies of water. She received her GUE Recreational Level 1 certificate in November 2016 and is ecstatic to begin her scuba diving journey. Amanda was a volunteer for Project Baseline for over a year as the communications lead during Baseline Explorer missions. Now she manages communication between Project Baseline and the public and works as the content and marketing manager for GUE. Amanda holds a Bachelor’s degree in Journalism, with an emphasis in Strategic Communications from the University of Nevada, Reno.

How to Choose Your Dive Training

What Was Life Like on the Mars? Cold Water Forensics with Explorer Richard Lundgren