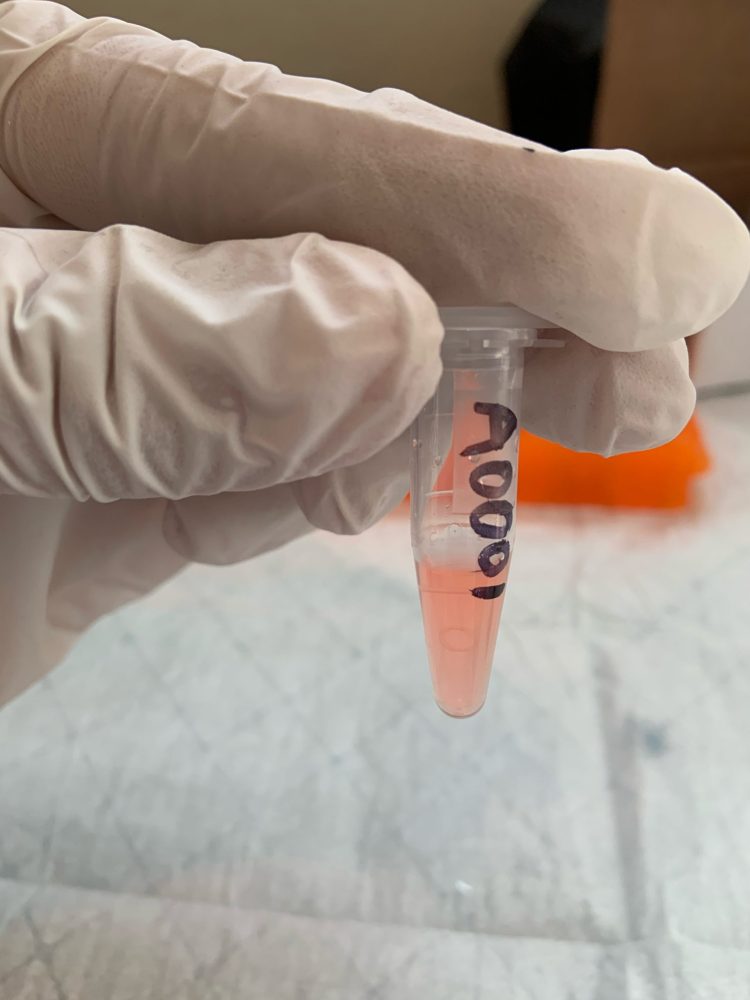 Photos courtesy of Marine Genome Project
The image shows a tissue sample of red algae after homogenization to release the DNA from the supernantent.

The Marine Genome Project (MGP) is a nonprofit organization founded by two avid divers Daniel Ortega and David Mulé with a desire to promote ocean conservation. MGP’s mission is to collect genetic information from marine organisms with the intention of creating science-based educational resources.  MGP plans on achieving this by creating an open source system to aid in preservation projects that spread  awareness about the fragility of marine species and the ecosystems they inhabit.

Daniel Ortega is in his early twenties. He grew up spending endless hours begging his parents to let him learn how to scuba dive. Like many children figure out at a young age, if he was persistent in bugging his parents, they would eventually give in to the demands. Even if it was just to get him to finally shut up about scuba diving. Daniel got certified at the age of 12 and has been diving ever since, he’s been working full time in the diving industry for 4 years. He currently holds numerous recreational, teaching, and technical diving qualifications including GUE Tech 1 and Cave 1. Daniel has been passionately dedicated to protecting the underwater environment from a young age, and this is what sparked his desire to start The Marine Genome Project (MGP) which is dedicated to protecting the ocean and the species that live within for years to come.

Daniel couldn’t have started The Marine Genome Project without his friend and fellow GUE Tech 1 and Cave 1 teammate, Dave Mulé. As one of the founders of The Marine Genome Project, Dave’s work has been crucial in guiding its behind-the-scenes infrastructure. As a practicing lawyer and avid diver, his talents have been well suited to building MGP’s support structures.

The duo have talked about what their future in diving would look like for years. They tossed around the idea of everything from opening their own dive shop, to buying a vessel to turn into a research diving vessel. While years ago they didn’t have the idea that you see today, one thing was for sure: it was going to involve diving and protecting their favorite place on earth, the ocean.

After a few years, the team settled on starting MGP. Daniel noticed two common factors that he felt were lacking in some of the other major organizations dedicated to ocean conservation.  First, was the lack of transparency in the conducted research and how the data was being used to help marine ecosystems. Daniel is a firm believer in the philosophy that if you can’t understand the solution, you can’t understand the problem.  The second factor was the lack of community involvement. Many major organizations are not efficient at involving the community in their work.  MGP believes in actively involving communities in every step of its mission and scientific process.

MGP wants everybody to understand and appreciate how genetics can be used as a vital tool for marine conservation.  Although science may seem confusing to many, it does not have to be that way. Genetics in simple terms is the study of genes and genetic variation of organisms. The field of genetics is often confusing and misunderstood by those who are not trained in the field; but, as Daniel would say “if I can do it, you can do it.”

To allow our communities to better participate, MGP started a page on its website called the “Science Spot.” The page breaks down the scientific methods and procedures used by our research team into bite sized chunks. The team wanted to lower the barrier of entry into science and marine preservation work. On this page people can learn everything from what genetic information is to how it is collected.

Let’s talk about the geeky side of our mission. DNA is the instructions determining what an organism might look like, what it might eat, how long it might live, and other vital information. DNA is made up of a five carbon sugar phosphate group with a nitrogenous base made up of nucleotides. The nucleotides in DNA are A,T,G,C. These Nucleotides pair together to form a base pair. The nucleotides follow rules, such as, A pairs only to T and G pairs only to C, except in RNA then A pairs to U which substitutes in place of T. The ordered reading of these base pairs is what allows us to see how an organism’s cell would function.

Now that we have a basic understanding of what DNA is, we need to learn how to visualize it. Visualizing DNA used to be extremely difficult. The machines would take up half a room, run for months on end, and cost exorbitant amounts of money. With the passing of time, things have changed; whole genomes can be sequenced in the field and with devices as big as your mobile phone. One that we use is a Nanopore sequencer. It works by using a flow cell with many little microscopic holes in it which sits in an electro-resistant membrane attached to electrodes. When these nucleotides pass through the nanopore membrane, the current in the membrane is distrusted, creating an electrical reading. This reading is then translated to the corresponding nucleotides.

This information can then be read and compared to known sequences to detect changes in nucleotide sequences. This can help researchers better understand the effects of external environmental stressors on the heritability of genes among other uses. With the collected information MGP is able to provide data supporting potential detrimental damage to marine environments, with possible avenues that can be pressured for solutions.

With the fast pace changes we are seeing in science and technology, we now have more tools at our fingertips for protecting our underwater world. At the end of the day, the idea behind MGP was to bring a mutual respect and love for the environment to the general public. When we can respect and love something we are more willing to protect it. The Marine Genome Project team would like to encourage everybody to get involved in your community in protecting the sites that we cherish everyday, so others can cherish the sites tomorrow.