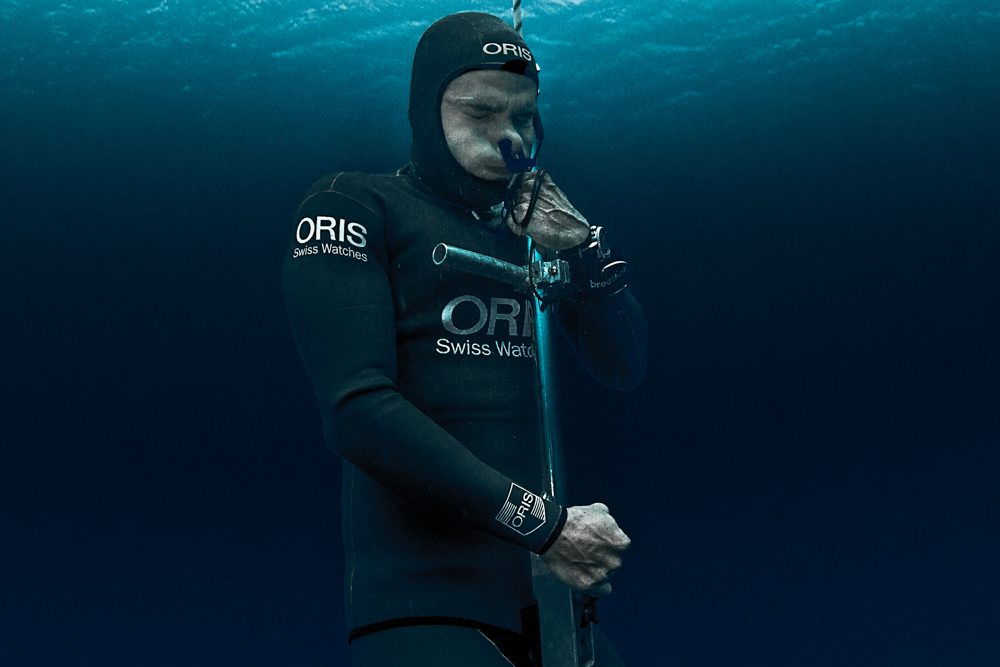 By Reilly Fogarty. Header image and photos by Lorenzo Mittiga unless noted.

Until recently, breath hold divers weren’t even on the radar of academics researching DCS—their dives were too shallow and too short in duration, the supply of inert gas held in a single breath was considered inconsequential, and injuries went unreported or improperly diagnosed. In the span of a few short years, a number of seemingly unrelated events occurred that changed the way we understand freediving physiology.

First and most importantly, the sport itself exploded in popularity. Uninitiated outsiders watched freediving organizations, shops, and competitions pop up seemingly overnight. Suddenly, millions of people across the globe were learning to dive without SCUBA gear, and the safety and medical communities had to play catch-up. Not only were freedivers more numerous, but they were also becoming more advanced and aggressively pushing the limits of their sport. Soon divers weren’t just exploring the shallows, but reaching 152, 183, and 214 meters (500, 600, 702 feet) on a single breath (No Limits Apnea)—far deeper than all but the most extreme SCUBA divers.

At the same time, researchers were noticing incidents of decompression sickness involving marine mammals. Whales, dolphins, and seals became the notable subjects of research involving decompression sickness and involvement of DCS in unexplained behaviors, injuries, and fatalities. While the physiology of these animals differs from our own, this research runs parallel to the work of academics who are working to to understand how breath hold divers could be experiencing DCS symptoms.

While we were learning about how our marine counterparts experienced DCS, the incidents of DCS among freedivers increased—although it’s unknown whether this is more accurately attributed to the growth in participation or to deeper dives by athletes. Here’s what we know now:

It would be easy to assume that the physiological mechanisms at play in breath hold divers are identical to their better equipped SCUBA counterparts, but research has shown that this is not the case at all. While divers of both types share common fundamental responses to immersion, cold, and depth, SCUBA divers primarily have to contend with gas loading from a constantly replenished supply of inert gases. Breath hold divers, however, have the opposite problem and must perpetually race a depleting supply of oxygen in their lungs. The unique adaptations that make elite free divers capable of reaching extreme depths also correlate with specific changes in skeletal and cardiac muscle responses, respiratory symptoms, and neurological symptoms that resemble DCS.

Among cardiac and skeletal muscles, some research has indicated that the combination of factors unique to breath hold diving may exacerbate exercise-induced muscle fatigue. The combination of extreme environmental conditions “prolonged physical activity and complex adaptation mechanisms” led to a notable increase in several markers of muscle stress following breath hold dives among participants. Whether this is a result of a specific facet of the breath hold dive—be that exposure, hypoxia or some other factor —remains to be determined, but the data indicates that breath hold diving can cause significant muscle stress. Tying these markers into modern decompression sickness theories involving systemic stress and endothelial involvement brings to light a number of fascinating possibilities for the development of DCS among freedivers.

The extreme stress that athletes put on their lungs during a breath hold dive also contributes to the physiological differences among apnea divers. Repeated breath hold diving has been associated with pulmonary edema, and symptoms of acute respiratory distress syndrome, which are seen as lung comets (a measure of extravascular water in the lungs). Just as with muscle fatigue, it is difficult to specifically identify which facet of breath hold diving causes the greatest number of—or the most symptoms of—these conditions, but the correlation has been validated by several studies. Just as with SCUBA diving, it’s easy to see how an impairment in the pulmonary system could alter inert gas elimination and lead to DCS symptoms.

Taravana—neurological symptoms that occur after breath hold diving—are both frequently reported and now identified as a type of DCS. While easily identifiable gas embolisms are rare among freedivers, these neurological symptoms have been noted for some time, but are just now being understood as indicative of decompression sickness. Most of these symptoms occur in relatively benign situations, with exposure profiles that would seem low-risk, but their evolution has been correlated with the types of bubble counts that one would expect to see among SCUBA divers.

By the published data alone, the risk of DCS for freedivers above 100 meters is essentially zero, and it reaches a maximum of 5 to 7 percent near 230 m/755 ft. The increase in the number of divers worldwide, and the depths those divers reach, has led many to believe that prior data may underestimate DCS risk, and has brought closer attention to many previously overlooked post-dive symptoms and incident reports. This research is ongoing, so the actual risk of DCS is virtually impossible to predict, but it seems likely that greater attention will result in an increase in the published occurrences of DCS among freedivers.

The combination of these factors, extreme stress to the muscular, cardiac, and pulmonary systems, common neurological symptoms, and pulmonary fluid concerns leads to an academically fascinating place—if one with few concrete lessons to take home. What we are left with are a number of factors that we know affect DCS risk among SCUBA divers, combined with significant neurological symptoms and exacerbated by pulmonary concerns.

It’s a tough nut to crack—with known inputs and outputs, but very little understanding about the chemical pathways—and our current tissue supersaturation models just aren’t well equipped to estimate the risks involved. Without knowing more about how and why DCS symptoms evolve among freedivers, it is difficult to know exactly how to keep divers safe.

Several training agencies have developed rudimentary protocols to limit dive depth and increase time between dives, and these are absolutely worth considering. Most agencies recommend the following as a general protocol:

It is important to understand that these recommendations are empirical and require scientific research to become more convincing.

Working divers and those reaching extreme depths more frequently may need greater conservatism to minimize their risks of DCS, which is why Performance Freediving International founder Kirk Krack has begun to develop mixed gas freediving protocols and training courses. Krack’s protocols involve promoting the use of nitrox pre-breathing before a dive to minimize both the risk of DCS and hypoxia.

The use of pre-breathing gasses in freediving is controversial, but divers like Krack and world record holder Eric Fattah believe the benefits are significant. “Nitrox adds a dramatic safety factor,” Fattah claims. “CO2 becomes the limiting factor when diving with nitrox. It’s almost impossible to blackout.” Fattah’s claims have not been verified, particularly the statement that pre-dive nitrox breathing decreases the probability of blackout. It’s easy to see how there may be some notable benefits for freedivers. However, although there is interest in mixed gas use, the International Association for the Development of Apnea (AIDA), has not adopted the use of nitrox for safety divers. Based on their safety diver protocols, the organization does not see a need. However, breathing of pure O2 and O2-enriched gas mixes is not allowed within one hour before the start of performance in freediving competitions.

Shy of providing the conclusive mechanism of injury yourself, the best course of action for the most common types of freediving appears to be conservatively planning dive times and surface intervals, considering mixed gas training, and learning how to treat DCS should you begin to show signs and symptoms. It is unlikely that decompression algorithms will be published—let alone validated for freedivers—in the next few years, but it is possible to prevent the vast majority of injuries with only a conservative approach and a solid understanding of gas dynamics in the body. With any luck, the convergence of research into deep-diving marine mammals and into the physiology of freedivers will shed some light on how the stresses of apnea diving can increase DCS risk, and we may all be able to learn something from hooded seals during our next freediving course.

Shearwater Blog: Do Whales and Sea Turtles Do Decompression? by Guy & Anita Chaumette

DeeperBlue: Technical Freediving: Are Breathhold Divers Ready To Mix It Up? by Michael Menduno

Freezediving: What Doesn’t Freeze You Makes You Stronger