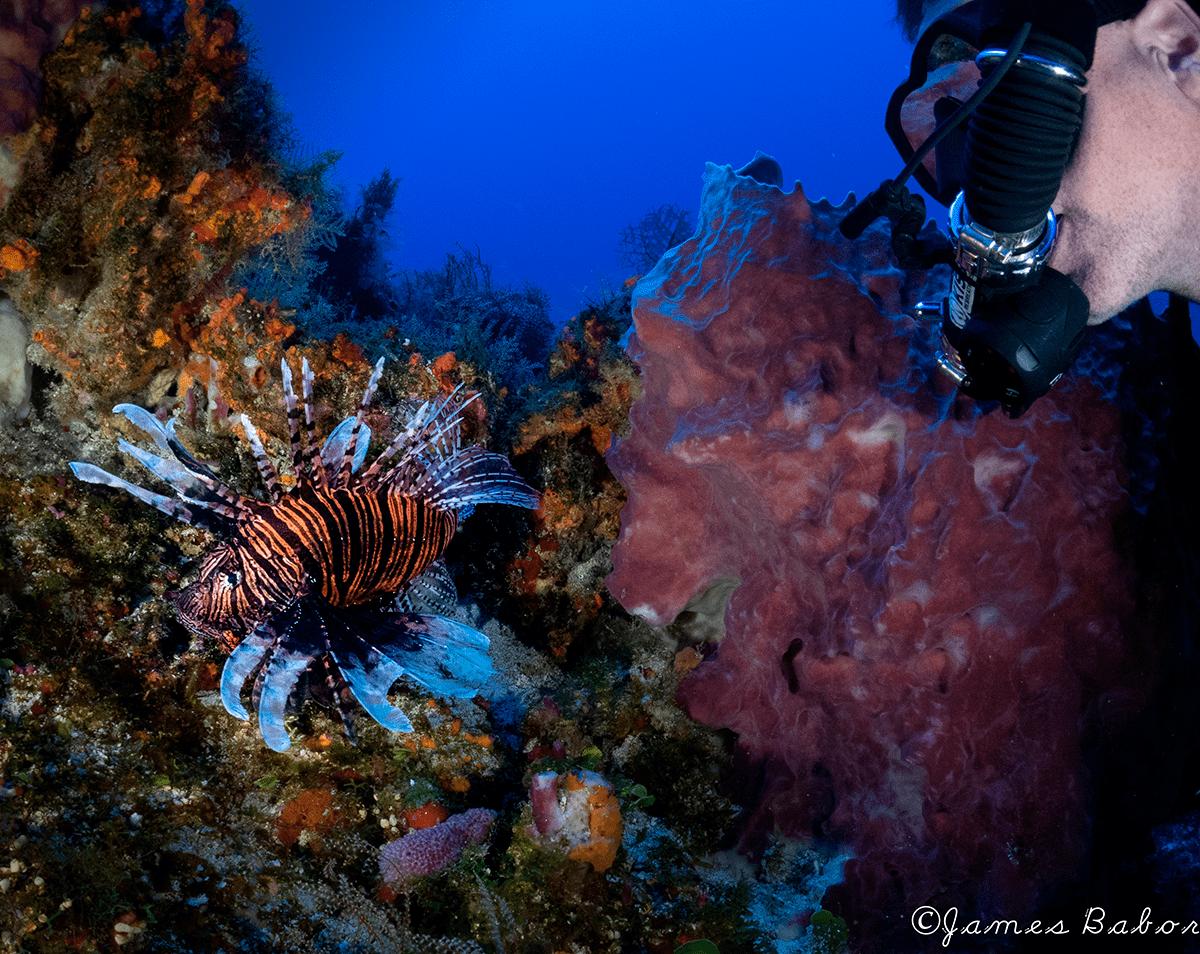 After doing all my closed circuit rebreather (CCR) critical control checks, i.e., “CHAOS,”  I jumped into the water to find myself in warm, cobalt blue water. We descended to 6 m/20 ft, did a quick bubble check, and started our descent. My automatic diluent valve (ADV) delivered a wonderful trimix 15/60 (15% O2, 60% helium) mix as I dropped down the wall and leveled off at about 60 m/197 ft. A large black grouper came to greet us, and we quickly reached the 65 m/213 ft overhang on the wall—the old coastline from the previous ice age. We followed the grouper inside the overhang and reached 80 m/263 ft. We found two large lionfish resting on a sizeable white sponge, and large strands of black corals and colorful gorgonian were all around. We turned our bodies into the current and began our 180-minute drift dive along the incredible walls of Cozumel. We were in heaven!

As we drifted along enjoying this incredible dive, my mind drifted back 20 years ago,

when I used to dive the Caribbean Sea in my home country of Venezuela. At that time, I had just become a PADI divemaster and used to take people on warm-water adventures in Venezuela’s national marine park, Los Roques Archipelago, near the island of Bonaire. As a divemaster, we limited our dives to 30 m/100 ft and closely followed the no-decompression limits. The tools of those times were single aluminum 80 (AL80) tanks, a warm-water wetsuit or no wetsuit at all on some dives, and the famous multi-level diving PADI wheeI.

In my 20-year evolution as a diver, I’m so thankful to have found the Global Underwater Explorers (GUE) organization and its amazing mentors, which made my 180-minute dive to 70 m/230 ft seem as simple as the old single tank diving of my past. Is this for real? Can Caribbean diving be even more incredible with GUE tools? Please allow me to take you on my rediscovery of the Caribbean during the last three years, with the hope that you will also enjoy the incredible natural resource we have at our disposal.

In 1998, as technical diving was just getting started, I moved to California after spending a few years attending school in Sydney, Australia. My time in Oz had left me a bit frustrated, having experienced what I now perceive as dangerous deep air dives in the Sydney Harbor as well as in the caves of Mount Gambier, near Melbourne. I arrived in California wanting to learn to use alternative breathing gases for going deeper.

I experienced improvements on the diving procedures and gases while training with West Coast technical diving pioneer Wings Stock from Santa Cruz, where we used to breathe trimix 20/20 (20% O2, 20% helium) at 67 m/220 ft. But, it was really not until I took my GUE Tech 1 class in 2001 that deep diving came to a new light. Helium was such a wonderful gas to put in our tanks, and the more the better. For me, doing a 46  m/150 ft dive with 35% helium removed most of the ambiguities of deep diving, reduced the risk, and made deep diving a much more enjoyable experience.

Living in Monterey, I was able to explore and document many of our deep water pinnacles, including those at Point Lobos Marine Reserve, Big Sur Banks, and others.

Unfortunately, I quickly forgot all about the Caribbean and settled in as a cold-water California diver. During that time I also started going to Mexico to dive the amazing caves of the Yucatan Peninsula.

Fortunately, I got better at cave diving, got into exploration, and was lucky to discover the Hoyo Negro Pit and an amazing assembly of animal and human remains from the Late Pleistocene. From 2007 to 2014, Hoyo Negro, underwater archaeology, and scientific diving were at the center of my diving world. As time went by, my distant past as a Caribbean diver faded more and more from my diving horizons.

The Return to the Caribbean

In 2014, I reluctantly agreed to a warm-water diving vacation with my girlfriend. Cozumel was close to the caves, so I figured I could do my cave diving project, then spend a few days of diving Cozumel in order to make everybody happy. However, as soon as I jumped into the water, I recognized the warm, blue water surrounding my body and realized I had been there before; in fact, it was imprinted in my mind.

I was quickly able to find all the little creatures inhabiting the reef, including seahorses, green moray eels, and arrow crabs, and the larger creatures as well: barracudas, eagle rays, and nurse sharks. I felt about 20 years younger, having returned to my natural environment. On the second day of diving, after the divemaster gave us a check out, we ventured to the Cozumel wall. We quickly dropped to 30 m/100 ft, and I could see the wall going down, probably to 60 m/197 ft. I immediately wanted to go deeper on the wall and explore! However, considering my minimum gas reserves, equivalent narcotic depth (END), and maximum operating depth (I was diving nitrox 32), I realized that I needed the right tools.

By the end of the trip I was convinced I needed to come back to Cozumel with GUE tools. At a minimum, we needed to ditch the single tanks for doubles, or better yet a rebreather, and find a way to get helium, Softnolime, and a reliable boat operator willing to conduct some fun tech dives.

I got back home and started talking to Cozumel veterans about how to get the equipment and support I would need for deeper diving. The most common answer I got was, “People in Cozumel don’t like deep diving.” There had been too many accidents, so they didn’t want to take people deep on the reef. Furthermore, my inquiries with dive operators were not successful; the best answer I got was that some shops had larger steel tanks.

I eventually found a dive operator who was willing to conduct deep diving and had a great boat and crew. Unfortunately, the owner of the shop had had problems with GUE divers from the early “Doing It Right” era of the ‘90s, and thus was not very welcoming to me as a GUE diver or instructor. It took a lot of energy to convince him that I was a nice person, and that I was not going to call him a “stroke” or require him to wear all Halcyon dive gear. After numerous meetings, dinners, and some mescal, I finally had access to a good boat, an experienced crew, and the all-important helium.

Over the last three years, my friends and I have conducted numerous fun dives in Cozumel and held some simple classes. Here is a description of what’s possible starting with the simplest diving and going to the more complex.

The CCR allows for more flexible decompression and increases the enjoyable part of the dives. It’s not uncommon to extend the stops in the 37-21 m/120-70 ft range diving inside a coral head. We often make our stops for 20 minutes every 3 m/10 ft on our way to the surface, which allows us to stay on the reef for most of the dive. Our 6 m/20 ft stop is not much longer than the previous stop, which is a big change for people accustomed to long 6 m/20 ft stop hangs.

All in all, diving Cozumel with the appropriate tools provides for an incredible experience and allows you to practice your skills in a wonderful and warm environment. I plan to organize several trips to Cozumel in 2020. I hope you’ll be able to make it.

Beto will be running a number of ‘tech” trips to Cozumel in 2020. If you are interested please contact him at: betonavab@gmail.com

Alberto “Beto” Nava is a Venezuelan-American engineer, diver, dive instructor, and explorer based in California. He has over 18 years of diving experience and has completed over 500 cave dives. His longest cave exploration penetration dive has been 4.7 km/15,500 ft. He and his group of fellow divers particularly enjoy exploring the cenotes in the Yucatan region of Mexico.

It was on one of these excursions that he and his colleagues discovered Hoyo Negro, or “Black Hole.” The bottom of Hoyo Negro contains bones of several Ice-Age megafauna and bones of a young girl who lived 13,000 years ago. They named her Naia. This discovery started one of the most important studies of the first Americans in recent history. From 2011 to 2015, Nava was a National Geographic Explorers Grant recipient. He used the grant to continue diving and photographing Hoyo Negro. His photography is now being used in the innovative labs of the Cultural Heritage Engineering Initiative at the Qualcomm Institute at the University of California, San Diego, to create a unique 3-D experience of Hoyo Negro for those who cannot do the difficult dive and would like to experience and study the space.
Nava has also published several papers on diving, underwater mapping, and the discovery of Hoyo Negro. He holds bachelor’s and master’s degrees in computer science from the Simon Bolivar National University in Venezuela and has worked as an engineer for over twenty years.

Heads Up Swimmers and Divers Who Swim