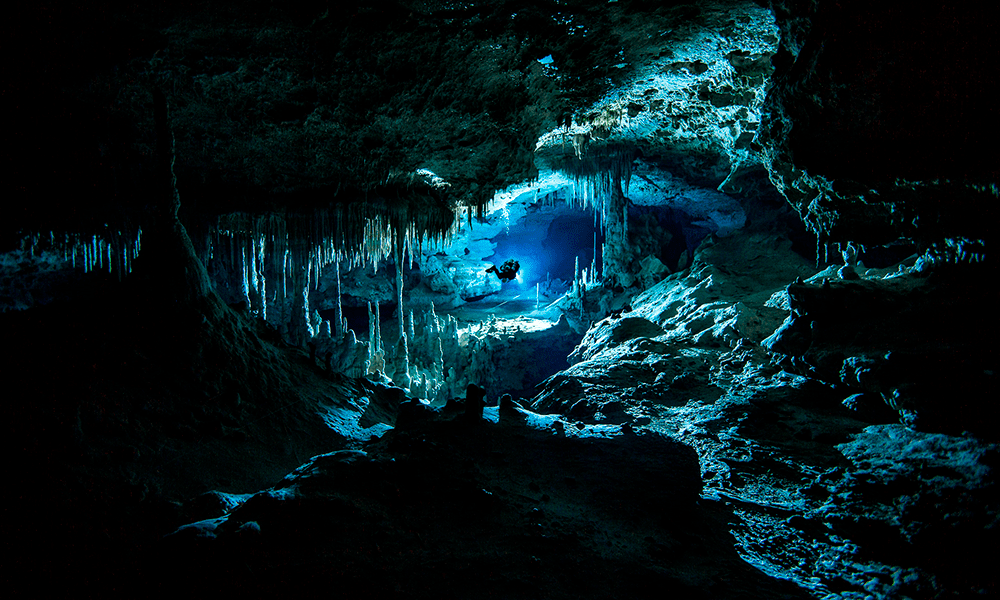 Beginning with this issue of InDepth we will feature specific photographers whose images we admire. To kick off this new tradition we start with Ali Perkins, a technical and cave diver from New Zealand who has been photographing the underwater world almost as long as she has been scuba diving. Her mastery of imaging—everything from caves to the smallest sea creatures—grabs the attention of divers and non-divers alike. It makes you feel as if you were almost there.

“There was just so much underwater that was wonderful and weird and worth documenting,” Ali said. “The natural world is amazing to me. The ocean is a great place to connect with nature and have incredible wildlife experiences.”

But there is more to Perkins’ photography than just trying to capture the beauty of the underwater world that few people get to visit.

“Our freshwater places are precious and under threat. Our world is changing, and we need underwater observers to document these changes. All of these things inspire me to take photos underwater,” she said.

“I want to do more than take pretty pictures. I want to enhance our knowledge of the underwater world. If I can use my diving skills and underwater photography skills to contribute further to what we know, I think that would be a really cool thing.”

Perkins draws some of her inspiration from what she calls “the greats of underwater photography”. This includes people such as David Doubilet, Paul Nicklen (a mere five million followers on Instagram!), Viktor Lyagushkin, and Brian Skerry.

When we asked her what her favorite thing is to photograph:

“Underwater caves have a special place in my heart. I’m constantly amazed by their variety; every room and passage is different. I love to imagine how the cave was formed over time and the natural processes involved. I’m fascinated by how they’ve become time capsules, locking away archaeological remains and artifacts.”

“I love to imagine how the cave was formed over time and the natural processes involved. I’m fascinated by how they’ve become time capsules, locking away archaeological remains and artifacts.”

But caves come with their own set of challenges for photographers, Perkins explained.

“Caves are immensely challenging places to photograph. The immensity of the area to light up is a perplexing problem; there are serious conservation issues to consider, and there are the complexities of maintaining diver safety while executing a photographic plan in an overhead environment. I’m always being plagued by the question, ‘how do I take a photograph that does this cave justice?’ ”

Weirdly enough, Perkins says the hardest part of underwater photography is… wait for it… the water!

View more of Ali Perkins’ images on her website Inspired to Dive.

Alison Perkins is an avid cave diver and underwater photographer. She shares her adventures by documenting sites beneath the sea to locations of interest within caves. New Zealand’s oceans and Mexico’s caves are her regular playgrounds.

Those who recall Mexico’s “line arrow wars” and numerous Florida skirmishes know that cave divers can be a contentious lot, especially when it comes to line options and placement. Fortunately, the Yucatan underground has come up with an innovative and what appears to be an effective solution for community decision-making as cave instructor and co-owner of Underground Tulum Lanny Vogel delineates. 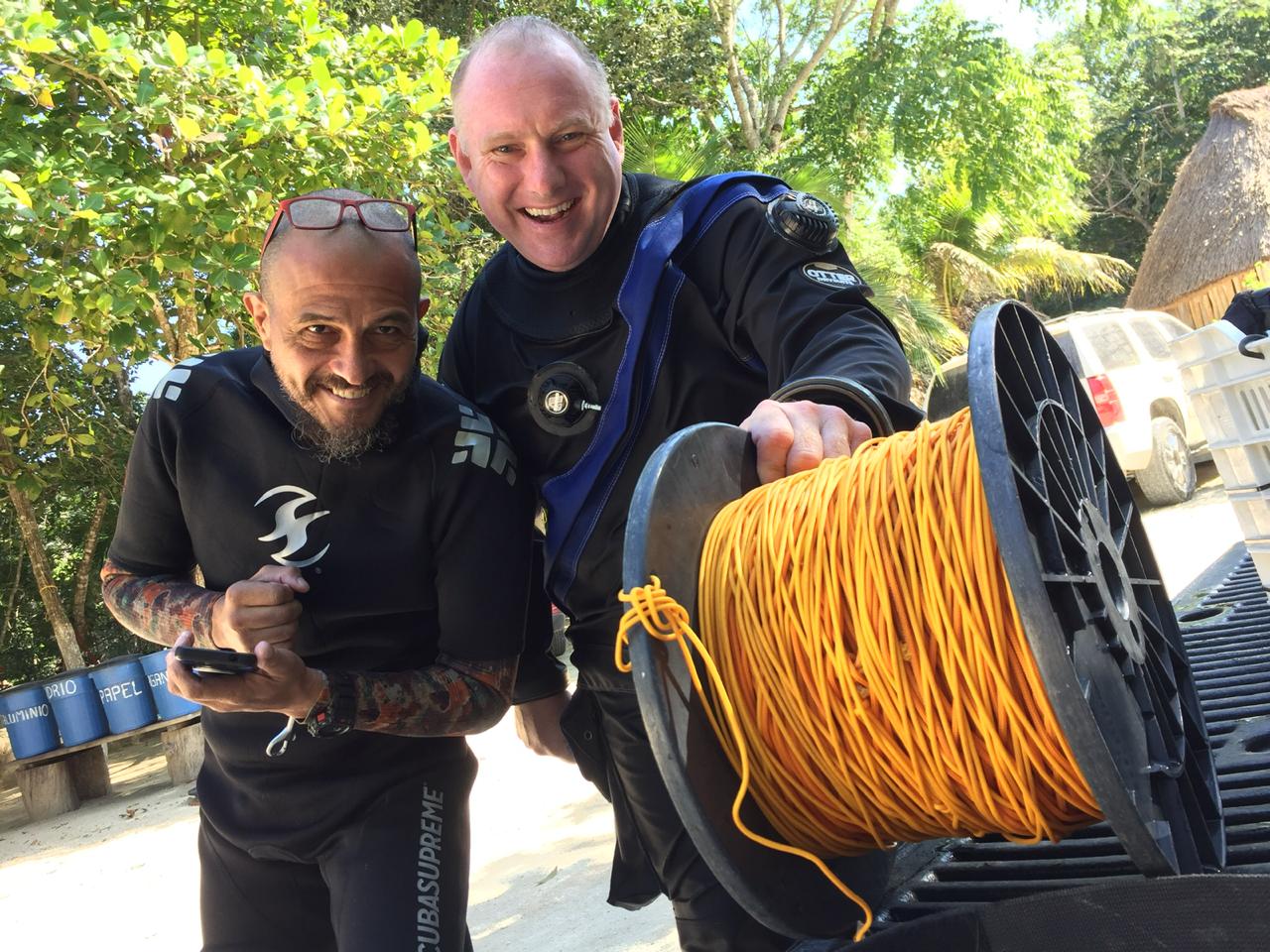 The placement and marking of permanent guidelines in caves can be a controversial subject. The opinions of individual instructors, guides, and explorers will often differ, and when egos are involved, discussions can quickly get heated.

The past, well-documented “line arrow wars” in Mexico involved a lot of unilateral line changes, the very sad removal of many of the original explorers’ arrows, and a great deal of tension in the community. Hardly better is an (alleged) situation in Florida where divers changing the lines in “their cave” reportedly had a fistfight in the parking lot, which had to be broken up by the local sheriff.

It makes sense then to establish some sort of line committee to be responsible for making decisions about safety and line placement, as well as advocating for cave conservation and good landowner relations. Historically, line committees have not been especially successful, either because many divers have felt that they are not adequately represented by the members, or because getting people with large egos and differing opinions around a table has been challenging.

Recent initiatives in Mexico may point the way to a better solution. Using communications technology that we all carry in our pockets has provided a more convenient and democratic alternative to physical meetings. The virtual line committee operates under the umbrella of Comité Regional de Espeleobuceo, Ecología y Regulación, or “CREER,” which translates to “believe” in Spanish. It includes representatives from the Association of Aquatic Services Providers (APSA), the Union of Divers of the Caribbean (SBC), Mayab Speleological Circle (CEM), Diving in Cenotes and Mar (BUCEMA), and from independent instructors.

CREER is doing great work in liaising with local and federal authorities over the regulation of diving and has produced a rigorous new system for training and regulating cavern guides.

All votes on line changes are conducted using SurveyMonkey, a virtual survey software. This means that busy people do not have to travel and attend a meeting in order to make their views known but just need to pull out their phones and click a few buttons to have their voices be heard. To inform the decision-making process, there is also a private discussion group on Facebook. All votes, results, and decisions are announced via a website which is open to all and is a useful source of information for local and visiting cave divers.

In order to set up something that was going to work, it was important that any system be seen as democratic, fair, inclusive, and transparent, with communications in Spanish and English. A key part of this was ensuring that the system had the consent of the majority of the cave diving community. The first vote was, therefore, to see if the community wanted a virtual line committee at all. Fortunately, this was unanimously agreed upon.

The next steps were to agree on parameters regarding who should vote, and to elect moderators. Following numerous discussions, it was decided that the criteria for voting was to be a Full Cave instructor or equivalent, have active teaching status with a recognized agency, be a legal resident in Mexico, and have worked in the region eight months a year or more.  Seven moderators were democratically elected to administer the line committee (Alex Alvarez, Luis Leal, Lanny Vogel, Kim Davidson, Vicente Fito, Vincent Rouquette-Cathala, and Natalie Gibb). It is an important part of the system that the moderators not have any more voting power than anyone else, but that they make certain the system runs smoothly, and safeguard online discussions to keep them respectful and on-topic.

So far, the community has democratically decided:

Anyone can make a suggestion to be considered by the virtual committee, and some future decisions that have been suggested include updating the list of approved “training caves,” standardization of the information on permanent markers (jump names, penetration distances), and numerous suggested safety improvements.  Any changes will only be implemented if more than two-thirds of the voting cave instructors agree, ensuring that we avoid controversial decisions with a narrow margin.

It is early days for the virtual line committee, but it is very positive that we have already seen the cave diving community coming together to make decisions that affect us all. Some democratic decisions have been contrary to what the moderators think would be best, but in a perverse way that is one of the coolest things about the system. Winston Churchhill once said that “democracy is the worst form of government, except for all the others,” which is something that applies equally to decisions made in cave diving.
You can find out more about the work of the virtual line committee and get updates on line changes and repairs on the website. Contact any of the cave diving instructors involved for suggestions on how to implement something similar in your community.

Lanny Vogel is a full-time cave instructor based in Tulum, Mexico. He is the joint owner of Underworld Tulum and the founder of the annual Cave Camp event. Originally from the UK, he retired from the Royal Navy in 2014 to cave dive full time 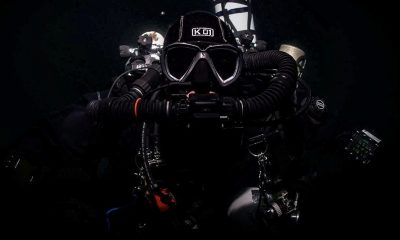 GUE is known for taking its own holistic approach to gear configuration. Here GUE board member and Instructor Trainer Richard... 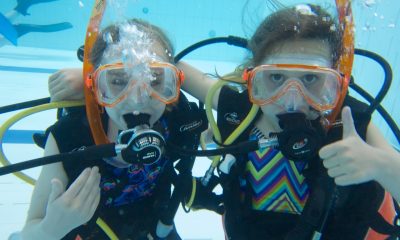 The Joys and Challenges of Teaching Kids To Dive

We all lament the fact that we don’t see more young people getting into diving. British instructor and content creator... 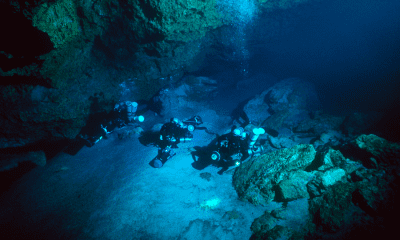 In the final of this four-part series on the history and development of tech decompression protocols, GUE founder and president,... 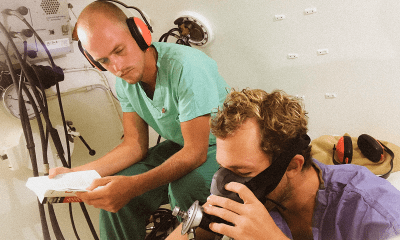 In this first of a two-part series, Diver Alert Network’s Reilly Fogarty examines the research that has led to our...