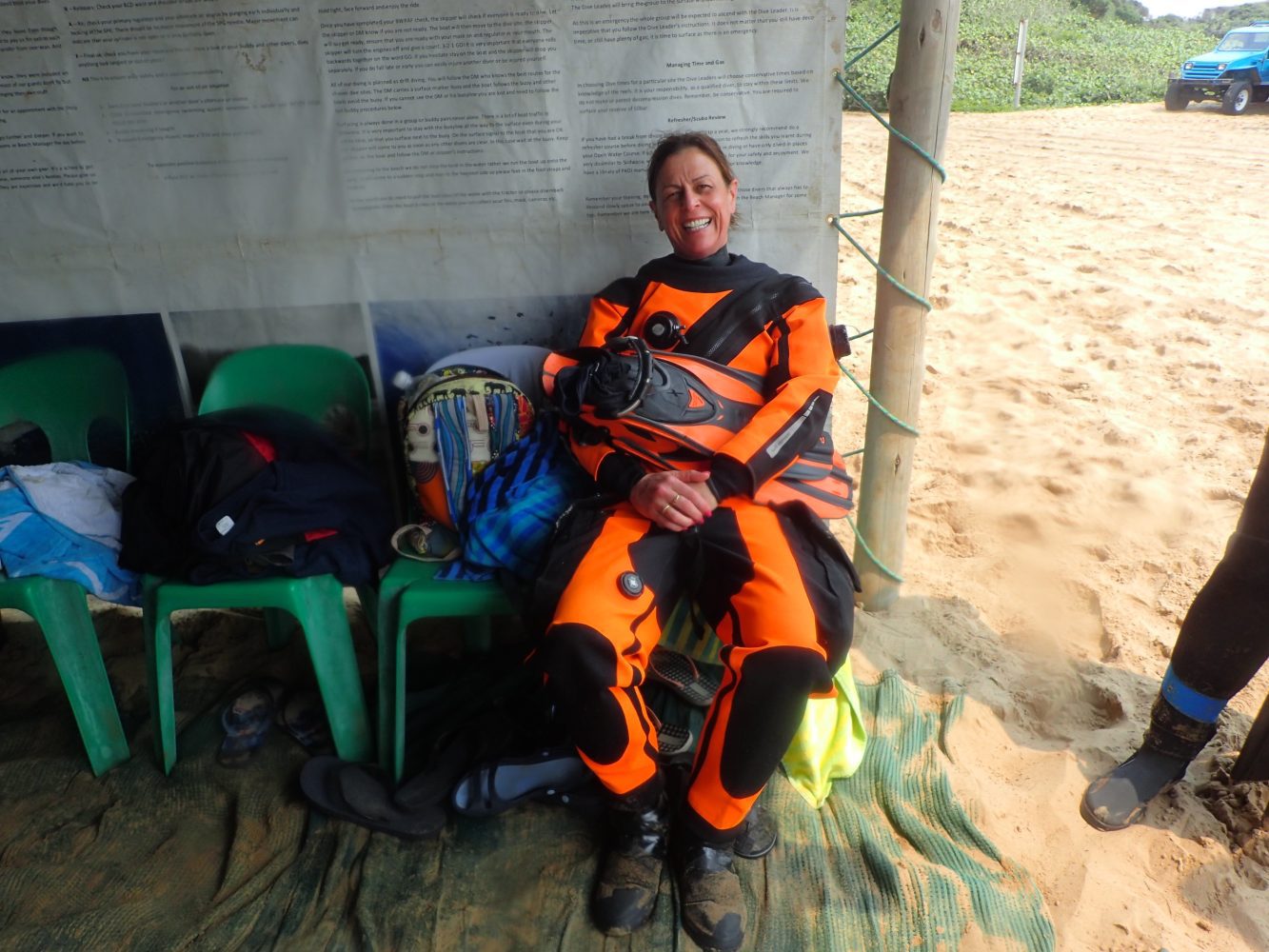 One of the colorful characters in the field of diving medicine died tragically in a rebreather diving accident on Thursday, October 17, 2019. Fifty-five-year-old, Australian diving physician and anesthetist Dr. Fiona Sharp, MBBS, FANZCA, was found unresponsive on a reef at 24 m/80 f. She had been solo diving on a rebreather, and she was discovered with her mouthpiece out. Fiona was medevaced but did not regain consciousness. The incident occurred on the last day of Fiona’s diving trip to Bonaire, located in the Leeward Antilles, Carribean Sea. It was the week after Bonaire Tek. Fiona enjoyed deep rebreather diving and was known to be a bit of a maverick.

“We are shattered.” Bruce and Lynn Partridge, Shearwater Research.

The disturbing news of Fiona’s death rocketed around the world in a few hours. Many people from the diving medicine and technical diving communities expressed their dismay and distress at Fiona’s death. She was gregarious, fun-loving, irrepressible, and generous. Fiona was a friendly colleague and we had dived together a few times. I wrote a heartfelt tribute about Fiona’s bulldozer attitude to life and diving, and this was published by X-Ray Mag. It includes a myriad of voices from around the globe and amply illustrates just how well-loved she was by her colleagues and friends.

“Fiona was an individual. She did what she wanted. She did what she loved. She was very much her own person, and drove us mad at times. Fiona was down to earth, had a massive heart, a huge personality, and was very dear to all of us. She will be greatly missed.”

Fiona Sharp was born in May, 1964, in Perth, Australia, and she was bright! She attended Mercedes College Perth, where she was “Dux” in her graduating year. [Dux: from Latin for ‘leader,’ the term that is now used in Australia and New Zealand to indicate the highest-ranking student in a specific achievement).

After leaving high school, Fiona studied medicine at the University of Western Australia where she graduated in 1989 as a Bachelor of Medicine and Bachelor of Surgery (MBBS UWA). After serving an internship in Perth in 1989, followed by a year as a junior Resident in Sydney, Fiona moved to England where she gained her Diploma of Anaesthesia (DA) in 1992, whilst working as a Senior House Officer in Anaesthetics in Southend, Essex.

Fiona then returned to Australia and commenced specialist Anaesthetics training. In 2000, she flew once again to the UK where she spent five years practicing diving medicine at DDRC Healthcare (Diving Diseases and Research) in Plymouth. During this period, she was awarded a Fellow of the Australian and New Zealand College of Anaesthetists (FANZCA) Fellowship in 2004.

At the time of her death, Fiona Sharp was working at the Fiona Stanley Hyperbaric Medicine Unit (FSHHMU) in Perth, Western Australia. She had been in post since it opened in November 2014. Prior to that, she was employed at the HMU at Fremantle Hospital from 2007 to November 2014. (The department then relocated to the newly built department at FSH).

Whilst writing this, I spoke to Fiona’s family and asked: “why medicine?” They responded,

“If you are really smart at school, you are expected to be an architect, a lawyer, or a doctor. Medicine appealed to her; however, it was possible that she could have become a vet because the family did have a lot of animals.”

“She was nuts, about everything. But especially about diving.”

Fiona got into diving in her late teens after trying skydiving and scuba diving. Water prevailed and she learned to dive when she was 18 years old. She was a PADI Divemaster, cave certified and qualified to dive the Inspiration, Evolution, SF2, Drager Dolphin, Mark VI Poseidon, and JJ-CCR rebreathers.

You cannot ever say that diving was her hobby. It was her all-encompassing great passion. Fiona recently told her older sister that she felt happiest when she was underwater. It was therefore natural that she would take an active interest in diving medicine, and she became a fixture at all the major diving medical or tech conferences. SPUMS, UHMS, EUBS, HTNA, as well as EUROTEK, OzTek, Rebreather Forum 3 and other diving industry events. These helped keep her current and educated in this niche sector.

“Fiona loved the diving, diving medicine, and the camaraderie around the bar. She was regularly first up and last to bed. Most often, Fiona could be heard well before she was seen on land and underwater!! She was well-loved by her colleagues at these events and, as many have said, the SPUMS Conference won’t be the same without her. I think she attended at least 17.”

Fiona’s first South Pacific Underwater Medicine Society (SPUMS) Conference was at Layang, Layang island, in Malaysia in 1999,  a venue well suited to her type of diving because it was deep. It was at a later SPUMS, in 2008, that Fiona’s diving would change. Dr. Catherine Meehan takes up the story.

“I met Fiona at a SPUMS meeting about 20 years ago. In 2008, I chartered the ‘Golden Dawn’ liveaboard. Ten of us flew into Alotau in Papua. New Guinea. and we sailed and dived our way across to Kimbe Bay, West New Britain, to join the SPUMS annual scientific conference. There was a rebreather on board and Fiona had a guided rebreather dive. She enjoyed it so much that she dived with it for the rest of the week. I believe this was one of her earliest experiences rebreather diving, and I think that she embarked on her passion for diving rebreathers shortly afterward.”

Catherine and Fiona would regularly dive together, at least two or three times a year, all over the world.

“We did a lot of conferences and diving together. We were most recently in South Africa diving Sodwana Bay. She was dressed in her vibrant orange drysuit so it was easy to see where she was, doing her own thing. It was tough cold water diving, but she was very hardy and didn’t miss a dive, even when her suit leaked. It is a good lasting memory of her.”

“It was like she had been shot out of a cannon when she entered a room.”

Fiona Sharp never did anything by halves, and this is amply demonstrated by a classic Fiona story that her older sister Donna regaled to me.

“Many years ago Fiona rang me up and said, ‘I have got two tickets to the rugby game on Friday night, do you want to come with me?’ I thought, ‘Why not?’ One of our kids plays rugby at school. I rocked up at the game and she said to me, ‘Here is your ticket. Don’t worry about paying. And by the way, these tickets are not just for tonight’s game. They are season tickets’.”

“We ended up supporting the Western Force, a professional Perth-based rugby team, for the next twelve years and watched them play Super Rugby against New Zealand and South Africa. What I found ironic was that I went to nearly every game. I think Fiona missed more games than any of us because she was away diving so much.”

“Fiona Sharp drew no quarters when it came to life and diving. I only met her a few times, but she left an aircraft carrier shipwreck-sized impression on my psyche and we remained in contact.”

Many divers have been generous with their Fiona stories. Todd and Tiffany Winn of Silent O Solutions reached out to me with another classic Fiona tale and said I could share it. When Fiona decided you would be friends, the recipient really didn’t stand a chance.

“Fiona’s reputation as ‘difficult’ preceded her, and our first encounter with her was memorable, to say the least. It was in San Diego for an in-water recompression symposium and training event in 2014. She exceeded my expectations. I believe she only told me I was completely mistaken two or three times. I conceded two of three and agreed to disagree on the third. She had an uncanny ability to defuse my ire with a wry smirk. As she had already decided we’d be friends, I had little say in the matter.”

“Tiff liked Fiona immediately and loved her unflinching honesty and authenticity. Fiona threatened to visit us on Maui on one of her transits across the globe, but unlike nearly everyone else she called and texted for a month straight, ironing out the details, and sure enough, one day, showed up. We loaded up our little boat for its maiden voyage, and Tiff and Fifi had a girl’s day rebreathering all by themselves. We had a beautiful day and a fabulous sunset. We will remember her fondly and often, and will miss her dearly.”

It is only right that I leave the last words to her family. I was told that Fiona had wanted to climb Mount Everest, but she suffered so badly with altitude sickness, that she just about made it to base camp and no further. Fiona was always willing to take a risk, and push herself. Apparently she competed in triathlons in her early 20’s, and she liked challenges. Everyone who came into contact with her soon found out she had a very dry sense of humor.

“Fiona didn’t like cheap champagne or wine. It had to be good quality and lots of it, and she always brought home two bottles of whiskey from every trip for her father.”

Fiona was close to her family. She is survived by her mother, three sisters, a brother, and 18 cousins. She was an “oh so very proud” aunt to 13 nieces and nephews. Typically big-hearted and kind, Fiona had planned to take a nephew to Antarctica this November. You mad as a box of frogs lady, you will be missed.

The author is very grateful for the assistance of the Sharp family and Dr. Neil Banham, Director of Hyperbaric Medicine at Fiona Stanley Hospital in writing this tribute.

Dive industry fixer, Rosemary E Lunn (“Roz”) is the Business Development Director at The Underwater Marketing Company. This British firm specializes in providing marketing, communications, social media and event management for the “tecreational” and technical diving industry. Rosemary is a PADI IDC Staff Instructor, BSAC Advanced Instructor, Trimix, and CCR diver. Before moving into the public relations field, she worked as a professional recreational instructor, safety diver, and underwater model underwater and appeared on the History Channel and National Geographic documentaries. She established TEKDiveUSA and organized Rebreather Forum 3 on behalf of AAUS, DAN, and PADI. In 2008, Rosemary co-founded EUROTEK, the European advanced and technical diving biennial conference. She is a respected and prolific diving author, an SSI Platinum Diver, an Associate Member of the Women Divers Hall of Fame, and sits on the SITA Board (Scuba Industry Trade Association).