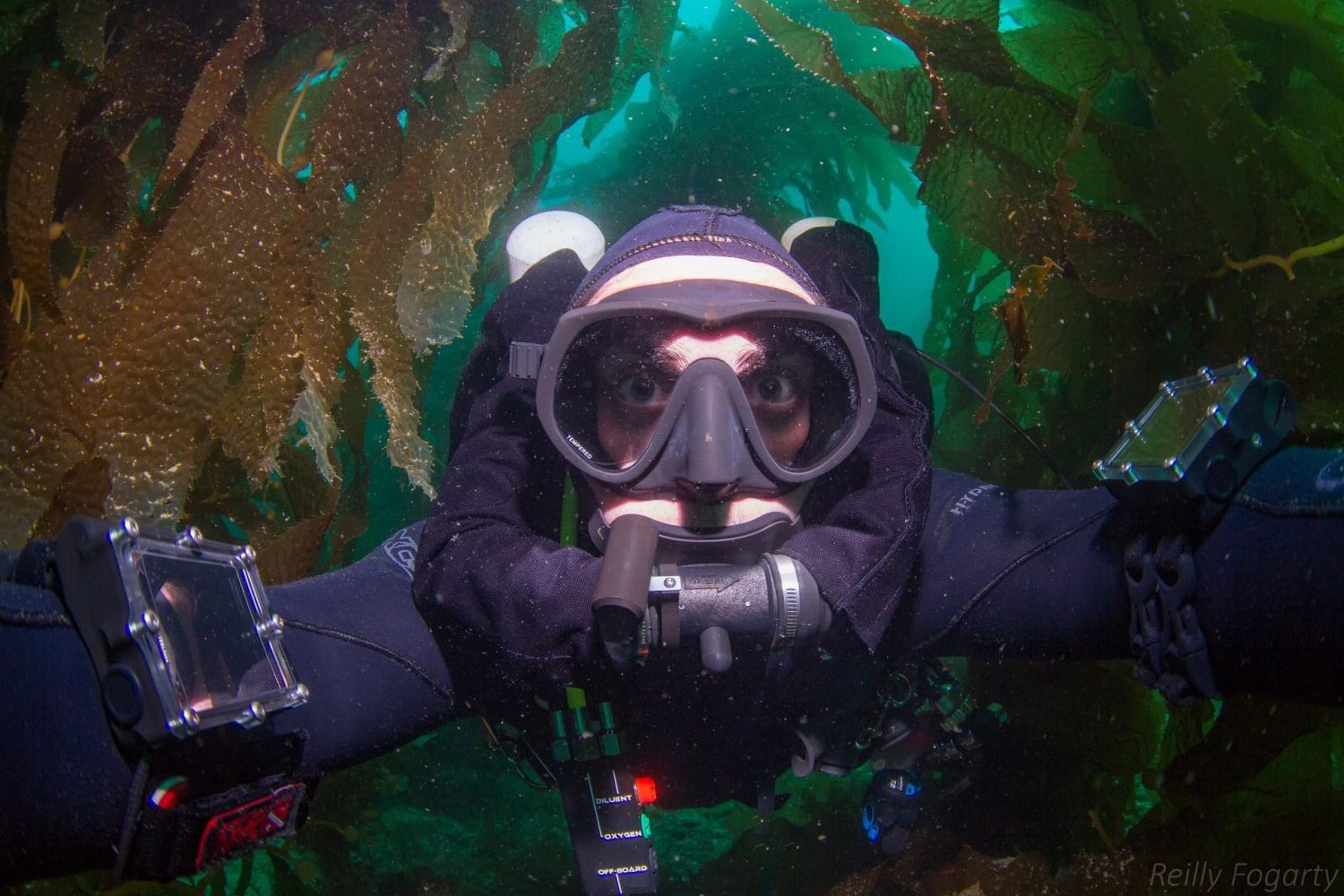 We surveys CCR divers from around the world. Here are the results.

Where do Agencies and Manufactures Stand on Mouthpiece Restraining Straps?

A Mouthpiece Restraining Strap Just Might Save Your Life

Rebreathers are excellent tools for extending dives and pushing the limits of human exploration. Unfortunately, discussing how best to set up your rebreather in any public forum can push the limits of human patience. The cost, the training, and the experience required to dive a rebreather can lead to strong opinions, and the debates about the commercially available options are endless. In these debates, consideration of important safety features can be lost.

Among these features are mouthpiece retainers sometimes referred to as “gag straps.”.The concept is neither new nor revolutionary—most are simple rubber straps designed to hold the circuit in a diver’s mouth in case of loss of consciousness. Some designs feature a half or a full face mask. The purpose of the feature is to keep water out of the airway of a diver who has lost consciousness. Beyond a few configuration options, there are few differences between most of the units available to recreational divers.

Research has shown that mouthpiece retainers offer a real benefit in terms of safety, so regardless of how you choose to configure your rebreather, a loop-retaining device is crucial.

Understanding what kills rebreather divers is complicated by the small number of participants and the problem of separating anecdotes from statistically relevant data in small incident sample sizes. Estimates of the total number of rebreather divers globally range from 6,000–20,000 divers; neither manufacturers nor training agencies provide their sales or certification numbers to the public. A safe estimate of active rebreather divers is generally considered to be around 14,000.

The military and to a lesser extent the commercial diving community (commercial Saturation divers use rebreathers for bailout) represent other groups of users. Both of these communities use slightly different equipment and adhere to much stricter operational protocols. Military/commercial use and fatality numbers are largely unknown to the public  as well, but there are some exceptions that have proven enlightening. Based on incident reports, DAN Annual Diving Report analysis, and a series of DAN Rebreather Forum meetings, the single largest killer of rebreather divers is drowning.

Based on incident reports, DAN Annual Diving Report analysis, and a series of DAN Rebreather Forum meetings, the single largest killer of rebreather divers is drowning.

While this may sound unsurprising or even obvious, it illustrates that what kills rebreather divers is not freak accidents or the increasing number of health issues we see in the larger general population of recreational divers. This shows that rebreather fatalities can largely be attributed to some kind of drowning—generally subsequent to loss of consciousness via hypoxia, hyperoxia or hypercapnia. It’s in addressing this cause of mortality among rebreather divers that diver supply valve (DSV) retainers come into play. These devices aren’t a catch-all designed to save divers from their own mistakes or drown-proof undertrained, would-be explorers. What they do is to provide a measure of safety in loss-of-consciousness events and to measurably decrease fatalities.

These mouthpiece retainers come primarily in two variations. The first is a retainer strap, like a mask strap, that attaches to a rebreather mouthpiece and is positioned behind the head. This strap attaches to a device that will seal around the lips (such as the lip seal on a Drager Safety Strap). The second option is a full face mask designed for CCR use, like the Draeger Panorama, or a partial mask design like the Kirby Morgan M48. There are now several commercially available options for rebreather divers looking for full or partial mask options; as long as the device is intended for rebreather divers and adequately minimizes dead space, it can  reasonably be considered for use. Excessive dead space in a full face mask can lead to unintended CO2 retention, which poses a greater hazard to rebreather divers than it does to open-circuit divers.

Both options function similarly, sealing the rebreather circuit to the lips and allowing the diver to continue breathing. It’s important to note that losing control of the circuit while underwater will also result in the loss of loop volume and a commensurate decrease in buoyancy, exacerbating any issues that led to the initial loss of control. This type of compounding incident is common among new rebreather divers and difficult to recover from.

Given the size of the market and the limited availability of military research, it’s not surprising that statistical studies of mouthpiece retainers are difficult to find. While it’s true that case studies abound, and many provide valuable information, the compounding nature of rebreather accidents makes it difficult to determine a single incident catalyst rather than guess at the most likely contributing factors to a fatality. What we know about mouthpiece retainers comes primarily from two studies. The first reviews 54 loss-of-consciousness events in military rebreather diving (Haynes, 2016), while the second reviews 153 diving injuries among French military rebreather divers (Gempp, 2011).

The Haynes paper begins by reviewing the range of issues created by the initial adoption of rebreathers by recreational divers. The early modifications, protocol creations, and fatalities illustrated incident statistics surprisingly close to what we see now, with “inappropriate gas” causing more than half of all rebreather fatalities in Haynes’ data analysis. This category (in this analysis) indicated a rebreather-delivered gas causing hypoxia, hypercapnia, or hyperoxia rather than a tank of mislabeled open-circuit gas. This holds true with what we now know about rebreather fatalities and serves as the motivation for Haynes’ review of mouthpiece retainers to minimize the fatalities caused by the resulting loss of consciousness in these incidents. While the Haynes paper goes on to cite military adaptations of mouthpiece retainers, case reviews, and expert testimonial, the most educational data cited is taken from the Gempp paper.

Descriptive Epidemiology of 153 Diving Injuries with Rebreathers Among French Military Divers from 1979 to 2009 confirms both the Haynes and industry data, with gas toxicity causing 68% of injuries. More importantly for our purposes, it reviews 104 cases of gas toxicity with 54 of those resulting in impairment or loss of consciousness in the water. Of these, the outcome was “always favorable” if the diver could be retrieved to the surface. Among the loss-of-consciousness events, only 3 fatalities were recorded. The paper goes on to state that “gas toxicities are frequently encountered by French military divers using rebreathers” but that the low fatality rate can be attributed to strict safety protocols, specifically the “mouthpiece strap, buddy team with link, and diving instructor with open circuit to lend assistance if necessary during training” (Gempp, 2011).

Both papers are clear about the use of mouthpiece retainers saving lives among the population studied. As with any research, it’s important to note that this may not apply directly to your diving. It’s true that mouthpiece retainers showed very promising results in case studies as well as incident reviews, but the subjects do not represent most recreational divers. Not only do both studies focus on military divers in better physical condition and with better equipment maintenance, but their subjects adhere more strictly to safety protocols and receive significantly more training than recreational divers.

The lack of training in particular is what brings issues like bail-out protocols to light. It’s true that bailing out with either a mouthpiece retainer or full face mask becomes somewhat more complicated, and the addition of a bailout-valve adds additional opportunities for user error. With adequate training and emergency protocols it seems unlikely that any of these concerns would notably increase risk, but that’s not something we have the data to confirm just yet.

Haynes, P. (2016, December). Increasing the probability of surviving loss of consciousness underwater when using a rebreather.

Gempp, E. (2011). Descriptive Epidemiology of 153 Diving Injuries with Rebreathers Among French Military Divers from 1979 to 2009.

When he’s not working with DAN on safety programs, Reilly Fogarty can be found running technical charters and teaching rebreather diving in Gloucester, Mass. Reilly is a USCG licensed captain whose professional background includes surgical and wilderness emergency medicine as well as dive shop management.

A Safe Restart: The Decalogue For Rusty Divers

Where Do Training Agencies and Manufacturers Stand on Mouthpiece Straps?