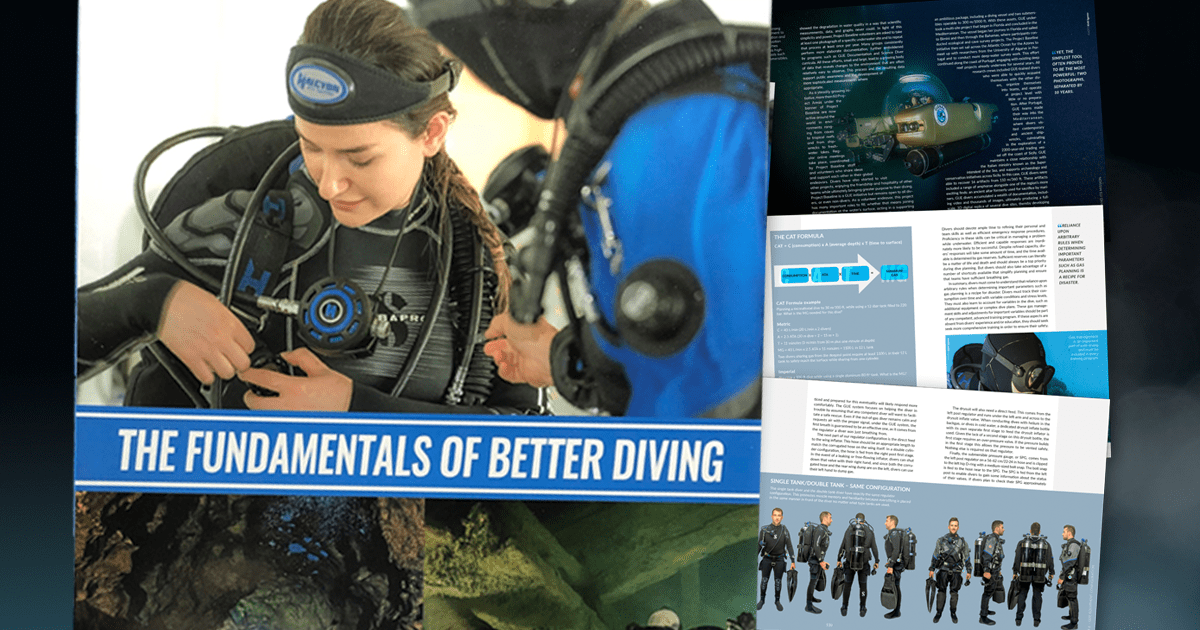 by David Strike
All images courtesy of GUE Archives

Hopefully everybody who dives has—at some point in their training—pored over the pages of a “How To” manual in an attempt to better understand the underlying physics and physiology governing their safe enjoyment of diving, and the techniques that, when mastered, will add value to the experience.

Often packed with simplified content to help speed the certification process, most entry-level diving manuals meet a one-time need. Having served their initial purpose of doling out the minimum amount of information necessary to encourage a novice diver, they’re seldom, if ever, regarded as meaningful reference works deserving of a permanent place on a diver’s bookshelf.

A controversial—and frequently misunderstood—concept that sparked vigorous and controversial discussion on the internet diving forums of the nineties was the term “Doing It Right” (DIR). This was a snappy phrase with origins rooted  in the equipment configurations, specific techniques, and rigorous training of the Florida-based, Woodville Karst Plains Project (WKPP), which was manned by a team of talented cave diving explorers and spear-headed by the WKPP’s then-Project Director George Irvine and Training Director Jarrod Jablonski, the founder of GUE.

More Than Doing It Right

First published twenty-one years ago in 2000, Doing It Right: The Fundamentals Of Better Diving, was much more than just another “How To” diving manual. The seminal guide was intended for an audience of certified divers prepared to embrace the GUE philosophy who also had “a basic understanding of scuba diving,” but who, perhaps, lacked sufficient mastery of the basic fundamental skills, one of the foundation stones on which DIR was built. The earlier book was a practical guide to proven diving techniques and practices that were based on the three fundamental components to good diving, “diving experience, diving ability, and a robust equipment configuration.”

As an evolving activity, the diving landscape has experienced enormous changes since the original publication first circulated. Once regarded as a technical diving gas, nitrox is now considered a mainstay of recreational diver training, while helium and other exotic gases are more readily available. At the same time, the use of diving computers is more widespread, their features are far more sophisticated and reliable and closed circuit rebreathers are now regarded as an essential tool for deep exploration activities in wrecks or caves.

None of these changes significantly impact the earlier book’s main purpose of “… playing an instrumental role in the formation of a sound diver, one whose skill, knowledge, judgement, fitness, and insight into the logic of sound configuration, enables him/her to meet the demands posed by the environments s/he selects to dive in.”

This was a rather long-winded way of suggesting that the original book was intended to be read—and its teachings absorbed—by an audience of would-be (and practicing) technical divers already fully committed to GUE’s DIR philosophy. The revised and updated edition—without in any way compromising or diluting GUE’s core beliefs—admittedly reaches out to a wider audience of diving enthusiasts with more subtle enticements: “The underwater world can be a source of infinite joy. It is a magical but alien world where everything is shrouded in mystery. To stand the best chance of securing the long-term enjoyment of this world, divers must have rock-solid fundamentals, both to rely upon and to build further skills with.”

A Blueprint for Safe Diving Adventures

The first change to the revised edition is the removal of Doing It Right from the book’s title (a move that allows GUE to focus on both the theoretical as well as the practical benefits of its system while ridding itself of the need to argue and defend a term that’s frequently misunderstood). Equally notable changes include a clean, uncluttered design and layout, the liberal use of relevant full-colour images and diagrams, and easily referenced content contained in ten broad chapter headings.

Reflecting the introduction of recreational entry-level training classes by GUE in 2008—and without directly challenging or refuting comments made in the earlier edition—each chapter in the updated text provides, in great detail, easily absorbed information that builds on a sound knowledge base to prepare “… divers for advanced forms of diving by introducing the concepts of stability, propulsion, team, gas management, and standardisation, well before the start of technical training.”

And where Doing It Right refers to the various skill levels expected of a “New Diver,” an “Advanced Diver,” and an “Advanced Technical Diver,”  the revised text prefers the terms “New Diver”, “Experienced Diver” and “Expert Diver,” a small but significant change in approach, and one that’s similarly reflected in the revised treatment of computers and rebreathers.

The updated text begins with the background and history of GUE, before launching into chapters that include fundamental skills, teamwork, equipment configuration, decompression procedures, dive planning, the properties of various breathing gases, diving in different environments, risk mitigation, and more; it concludes with a useful appendix of formulas (in both Imperial as well as Metric measurements). The Fundamentals Of Better Diving is so much more than a simple revision of an earlier classic. It’s a 212-page user-friendly blueprint for safe(r) diving adventures, a stand-alone work that can comfortably sit alongside its predecessor on the bookshelf as a permanent reminder that, while diving might be an evolving activity, philosophical concepts—regardless of their label—are better able to withstand the test of time.

Certified as a diver in 1961, with a background that encompasses the military, commercial, scientific, and recreational diving sectors, Australia-based David Strike is a former Diving Instructor, Diver Instructor Trainer, and a regular speaker at international diving events.  Founding and managing a leading international media organisation before returning full-time to the diving industry in 1990, Strike has co-published and edited a commercial diving magazine, authored several dive-related books and manuals, and been a regular contributor to diving publications from around the world. Organiser of several world-class diving events—with an emphasis on Technical Diving—he is the recipient of several Industry Recognition awards and a Fellow  of the Explorers Club of New York.

How does COVID-19 affect you as a Scuba Diver?