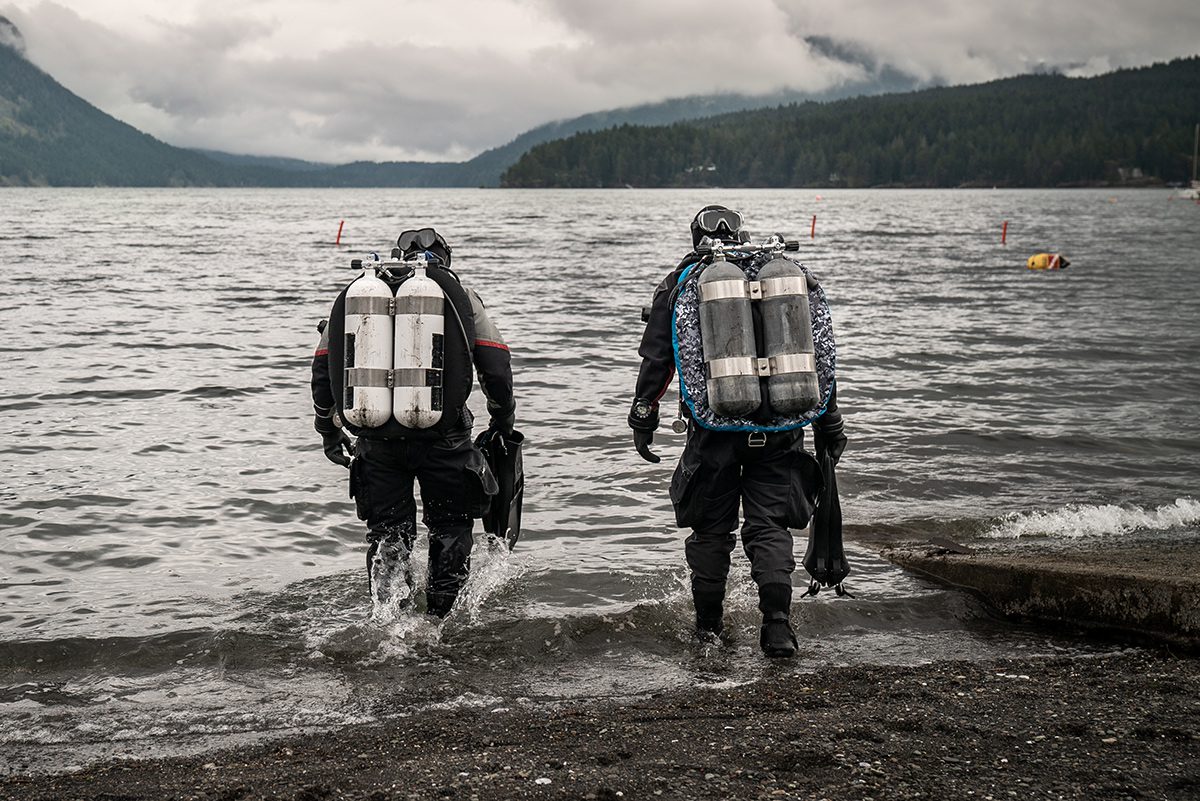 March 18-19, 2022, Maple Bay, British Columbia, Canada—Nearly 60 divers ranging from a few single-tank rec divers to experienced rebreather-savvy explorers, with more than a dozen instructor volunteers, trekked to Vancouver Island to attend the second three-day diving skills workshop dubbed, EDGE 2.0, hosted by Global Underwater Explorers’ (GUE) instructor evaluator Guy Shockey, his team at Thermocline Diving, with help from Global Underwater Explorers-British Columbia (GUEBC). The first such workshop was held in 2018. Divers came to participate from as far west as Singapore and Japan, east from Quebec City and Florida, south from Mexico’s Riviera Maya, and north from Alaska and places in between.

According to Shockey, the purpose of the workshop was to provide an opportunity for divers to refresh, work on and hone their skills in a low stress environment. “In over several years of teaching in the Pacific Northwest, it became clear to me that ‘normalization of deviance,’ or ‘drift’ was occurring between classes as far as divers’ skills,’ he explained. “I thought a workshop where students were able to dive with an instructor and ‘reset the clock’ would be a way to combat this drift.” Shockey added that the workshop would not only provide an opportunity for students to work with an instructor that they had likely never met, but also to give instructors, many who had not met one another before, a chance to work together and to build new peer-to-peer relationships. Note that the thirteen instructors in attendance volunteered their time.

For uninitiated warm water divers, it was also a chance to experience world-class cold water diving—with or without “heat” i.e., electrical suit heating, in the bio-rich 8ºC/46.4ºF waters of British Columbia. Brrr! For some who were relying on passive thermals, the experience was breathtaking. Literally!

As anyone who has taken a GUE course knows—whether it’s REC 1 or Fundamentals, up to CAVE or CCR 2—most of the in-water class work revolves around skill building, to wit; maintaining proper trim, buoyancy, and propulsion techniques, shooting a surface marker buoy (SMB), conducting a proper gas switch, deco bottle rotations, rebreather (CCR) loop flush, and bailout. Note that GUE has operational standards and procedures covering each drill or skill.

Classes also focus on building team problem-solving skills, such as managing out of gas emergencies, value failures, regulator failures, mask failures, light failures, CCR failures, as well as emergency procedures such as rescuing an unconscious diver from depth. The idea is to build capacity and confidence in dealing with problems they are likely to experience underwater, so that the team can focus on the primary goal of diving, which is HAVING FUN! Consider it part of GUE’s “Secret Sauce.”

Nearly 60 EDGE 2.0 divers convened at Maple Bay beach at 8:00 Friday morning. There, Shockey and his team of instructors divided up the assembly into more than a dozen working groups that were based on divers’ certification level and agreement about what they would practice. Each group was led by one or more instructors. “It was an opportunity to work on our skills with an instructor, without the pressure of being in a class,” offered Sabrina Figliomeni, a PADI recreational instructor and freediver who is in the process of completing her GUE TECH 1 certification. Each group then moved into the water to begin their team drills and skills.

Over the course of Friday and Saturday, each group conducted both a morning and an afternoon diving session for a total of more than 200 workshop dives, practicing everything from managing valve failures—which were simulated with deftly-wielded “bubble” guns in the hands of instructors— to shooting an SMB, practicing gas switches and deco stops, managing CCR failures and bailout, and rescuing an unconscious diver from the bottom at 10m/33 ft.

On Sunday, most of the groups headed to one of a plethora of Vancouver Island’s epic sites in the hopes of seeing giant pacific octopus, sea lions, eels, and nudibranchs during some fun shore dives. They were not disappointed. In total, Team Thermocline pumped some 787.1 kl/27,792f3 of gas including some 46.7kl/1650f3 of oxygen, at Thermocline’s blending facility, conveniently located adjacent to Shockey’s chateau, just up the road. Special thanks to Andrea Peterson, Jim Dixon, local GUE volunteers and our cadre of instructors for making the event run seamlessly.

A Community of Ardent Divers

In the evening, participants were treated to a buffet dinner and a talk at the Maple Bay Rowing Club facilities near the beach. On Friday night, Human Factors coach Gareth Lock, principal of The Human Diver  enthralled the crowd with a fascinating talk on the topic du jour titled, “If Drift Is Normal, What Can We Do About It.” The next night, InDepth editor-in-chief Michael Menduno, recounted stories from the early days of tech diving, in his talk, “From aquaCORPS to InDepth: How We Got Here from There.“  On Saturday, event sponsors Halcyon Diving Systems, Shearwater Research, The Human Diver, Eight Diving, and Sea Dragon Charters provided some amazing diver raffle prizes.

After the talk, divers were treated to ear-full of tasty classic rock compliments of Thor Kristinsson and The Thundercats. Later a team of GUE musicos, descended on the stage under the moniker “The Fundies,” and proceeded to pump out—what else?—standards, rock standards of course, much to the delight of the assembled tekkies. A good time was had by all.

Thermocline Diving and GUEBC plan to conduct EDGE 3.0 next year, March 17-18, 2023 at the same venue. Hint: Make sure that you are packing some heat—you won’t regret it. For more information see: EDGE 3.0.

InDepth: Anatomy of a Fundamentals Class by Guy Shockey

Why We Ghost Dive

Zen and the Art of Underwater Cleanup