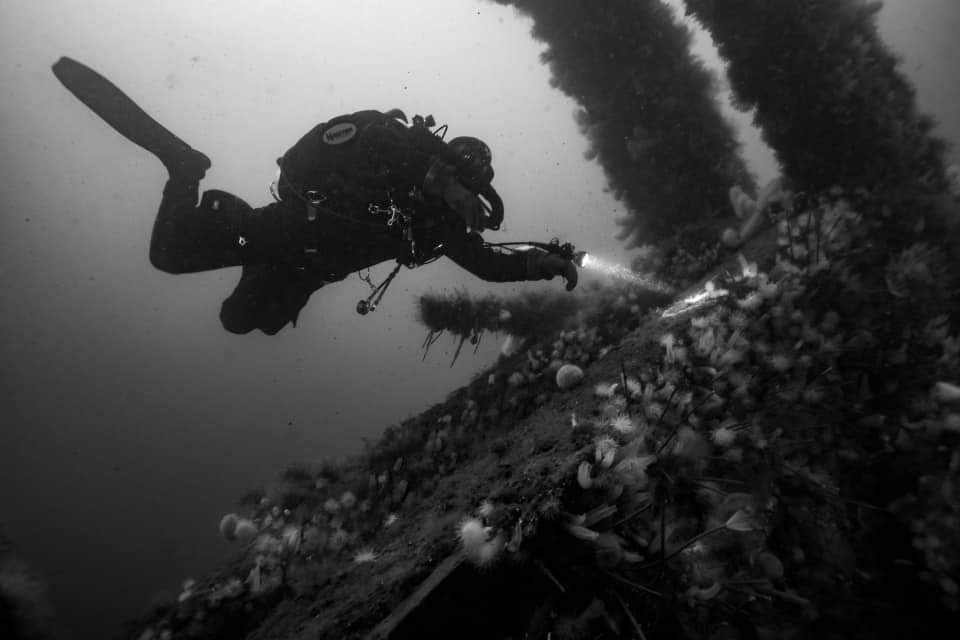 At the beginning of March 2020, I completed Global Underwater Explorers’ (GUE) Closed Circuit Rebreather Diver Level 1 (CCR1) course with Rich Walker. Taking this course had been a long term goal since I began diving under the GUE framework.  By way of an introduction, even though I had been curious about GUE for a couple of years, my focus had been on training to use a CCR so that I could extend my diving and undertake more challenging dives. At this point, taking a ‘step back’ to participate in a Fundamentals course, the first step in the GUE education system, was not high on my agenda, and I pushed ahead with a 60 m/196 ft normoxic trimix and Cave CCR.

In May 2018, I had joined a trip to Molnar Janos in Budapest, where we did some relatively deep dives to the 60m/196 ft section of the cave. During one of the dives I realized that if something were to happen at this point (deepest phase and farthest point from the entrance), the likelihood that any of the divers I was with would be  able to effectively assist me in an emergency, was slim to none. After returning from this trip, I completed my “Fundies” with Marcus Rose, and made the decision to pack away my JJ-CCR and dive with the growing GUE community we now have in Scotland. My end objective was to get back on to my CCR, but only when I was ready and could be an effective and vigilant teammate.

Since completing Fundies, I have built up experience, worked on my core skills to develop my capacity as a teammate, and undertaken more serious dives. Following up on this, I completed GUE’s DPV1 and Tech 1 courses in order to develop my abilities with mixed gas diving.

We’re very fortunate in Scotland that there is such a wealth of maritime history around our coastlines, and divers can find wrecks to suit any level of depth and ability. The east coast of the town of Eyemouth provides access to a huge range of wrecks, which include HMS Pathfinder, U-12, the British submarines HMS K4 and HMS K17, as well as the NJ Fjord passenger liner. Many of these wrecks were on my list to dive; but, I wanted to do them with a team that I trusted, so it made sense to proceed with my training in the appropriate manner.

A huge problem in Scotland is that helium prices  are astronomically expensive, and a fill of Trimix 21/35 can cost in the region of £180/US $219 if filled from empty cylinders. This of course restricted the frequency of when we could carry out these dives.  In addition to this, there are a number of very remote sites that we have dived in the recent past, and gas logistics became the biggest problem in being able to carry out these trips. We would often load up with two twinsets and two stage cylinders each for a weekend, and the cost of these fills soon adds up. As I’m sure you can imagine, the ease of logistics that is made available by using a CCR became appealing very quickly.

Diving Into The Course

What struck me about the course with Rich Walker was the level of detail that went into every aspect of using these machines. In my previous CCR courses, we had carried out checklists for pre-dive assembly and breathing checks. But, these were done as a group of individuals rather than as a team. Prior to this there had never been a sense of accountability toward my teammates, as it was very much a solo diving mindset.

For example, with the GUE class, the pre-build checklist sticker,  recording individual measurements of cell linearity, and cell manufacture dates contained a new level of detail that I hadn’t experienced before. That is not to say they weren’t discussed in my previous training, but cell linearity went only as far as, “If the cells sit between 46-54mv (millivolts) they’ll be ok,” and, “remember to change your cells every 12 months.” It was left to us as individual divers to maintain our own equipment without any real accountability to those we were diving with. Needless to say, looking back on this from a GUE view point, I was shocked that I had once been prepared to accept that level of risk.

From the start of the GUE CCR1 course, the point was made that rebreathers are meant to facilitate dives that are infeasible on open circuit due to gas logistics. When you are venturing into these remote and hostile places, why would you be willing to expose yourself to an intolerable level of risk? Especially when something as simple as a checklist could identify faults and prevent a potential failure that could result in an aborted dive for you and your teammates. Teamwork requires that each member be accountable to the others. Something as simple as a completed checklist confirms that you are thinking with the end in mind, and providing reassurance that you have physically checked each element of your unit.

My previous CCR training had no prerequisites in terms of skill level prior to enrolling in the course; the only requirement was a minimum number of dives. I managed to complete Module 1 without too much difficulty; however, Module 2 was a different story.

In my previous CCR training, when I started Module 2, I felt as if I was ready to start undertaking deeper dives. However, my lack of fundamental skills, stability, and buoyancy control became apparent when we started diving with two bailout cylinders and trying to manage these effectively. My buoyancy fluctuated massively, and problems I encountered became progressively worse as new skills and increasing depth were introduced and I became task-loaded.

As with Module 1, I managed to pass the course; however, looking back on my performance at that time, I should never have passed. I should have been sent home to work on my foundational skills since what I was missing was the appropriate skill level.

After completing GUE’s Fundamentals, that solid base became apparent.

As we moved on to learn new rebreather skills in my CCR1 class, the necessity for solid fundamental skills was clear, as we now had to manage our loop volume in addition to our wing and drysuit buoyancy. As I mentioned previously, prior to undertaking Fundamentals I had perceived this as a ‘step back’ from the point where I thought I was in terms of my own diving. However, I cannot emphasize enough the importance of having a solid skill base from which to build your capacity, and progress in your diving.

The capacity that GUE training instills in divers provides a common baseline for the team. It provides the reassurance that each diver is trained to the same standard, and will respond in the same manner to particular scenarios. In contrast, the skills taught in my original CCR courses varied depending on which instructor taught them. This could lead to a significant variance in an individual’s response in any given scenario without guarantee that the response will be correct, and more importantly safe. The difference led me to consider GUE’s rebreather configuration in particular, and the benefits it offered in comparison to a standard CCR configuration.

The rig, configured GUE style, looked very different from what I had seen previously, but after it was explained to me, and how it fits into the GUE framework, it all made sense. I first saw the setup about four years ago in a video demonstrating how a long hose deployment would work, and my first impression was that it looked very complicated and time consuming. ‘Why would you not just hand over a bailout cylinder and be done with it?’ was my thinking back then. In hindsight, I believe that deploying a long hose is much less risky than giving/receiving a bailout cylinder that may or may not have been analysed by that particular diver. Some of the CCR divers I had dived with prior to coming across GUE, don’t analyze their bailout gas before each dive. [Ed. note: GUE standards mandate analyzing and labeling gas the day of the dive.]

Incorporating a twinset of diluent into the rig reduces the number of external cylinders that must be carried on any given dive. As I alluded to earlier, I was carrying two Ali80’s (11 liter cylinders)—one bailout, one for deco—during my Mod2 course and was overweighted to the point that my wing was fully inflated and impeding my ability to manipulate the valve on my oxygen cylinder during a high PO2 drill.

Maintaining muscle memory from using a twinset allows for a smooth and familiar manipulation of the valves when required, and mounting the O2 bottle farther back removes any risk of the valve being caught by the wing if it’s overinflated. Overall, the rig feels safer to me, particularly when bailing out to open circuit. As mentioned previously, my prior training had been to use an external bailout cylinder and deploy that if the breathing loop was compromised.

I was not taught a set drill for verifying and deploying the bailout reg in my original CCR classes, and in a state of panic, I could very well have switched to a cylinder containing 50%, rather than a deep mix. In the case of the GUE configuration, it’s a case of either switching to a backup reg or using a bailout valve (BOV). Personally, I would prefer to do this, rather than running through a full gas switch procedure, especially if I was hypercapnic for example.

With this piece, I thought I would provide an overview of the particular elements of the course rather than a day-by-day account. I hope you’ve found this an interesting account of my experience and reflection on how the course sits in comparison to some other CCR training courses. If your objective is to move to CCR diving in the future, I would thoroughly recommend this course. I look forward to diving more with the GUE community and seeing you all on projects in the future.

Andy Pilley is a Chartered Surveyor, team member of GUE Scotland, passionate wreck & cave diver and Ghost Fishing UK team diver. Andy started diving with the Scottish Sub-Aqua club in 2011 and began diving with GUE in 2018. Andy dives on the east and west coasts of Scotland where there is a rich maritime history and an abundance of wrecks to be explored. He has a passion for project diving and is developing objectives for a number of sites with the GUE Scotland team. He hopes to assist on the Mars Project and with the WKPP in the future.