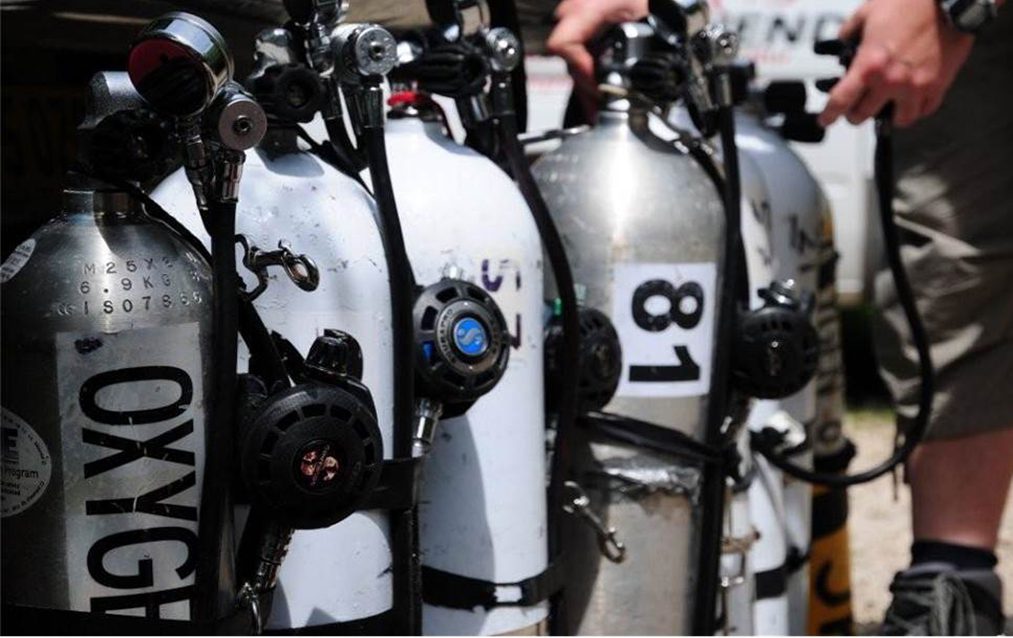 By Rich Walker
Header photo from the GUE archives

For the past few years, I’ve seen a worrying trend when people are discussing gas management topics. It seems to be restricted to regions using the metric system, and in particular some areas of Europe.

Now it’s nothing that is going to cause harm, or be dangerous to divers in any way, but it is simply a factual error that is creeping into teaching, and even into an official scientific diving manual. I think it’s time we fixed the mistakes!

The problem relates to the units that are used when talking about the free liters of gas that are present in a scuba cylinder. For example, the amount of free gas that a 12 Liter  cylinder, pressurised to 200 Bar contains can be calculated as follows:

And here is the problem that has been spotted. If you multiply Liters by Bar, the resulting unit should be Bar Liters, right?

To understand why this is so wrong, and the correct unit is still Liters, we need to go back into physics a little. Think about how you calculate the amount of free gas that is present in a cylinder at a depth of 30 m/100 ft. We’re talking about taking the cylinder to a depth of 30 m/100 ft, and then releasing the gas. How much volume does it now occupy, (assuming it doesn’t all float away of course)? Let’s take the same cylinder as the above example. We’d make this calculation:

Nobody could argue that the correct unit for the result here was Liters. The mistake that people are making is that, in equation (1), they’re forgetting that they are also dividing by 1 Bar, the ambient pressure at the surface. Now dividing by 1 doesn’t change the result, but the Bar unit of the “1” is important as it keeps the result dimensionally consistent, to use the mathematical terminology. If we rewrite equation (1) properly, you can see it for yourselves:

So there is no such thing in diving gas management as the Bar Liter. Let’s stop using it!

You can also watch the video in German.

Rich Walker learned to dive in 1991 in the English Channel and soon developed a love for wreck diving. The UK coastline has tens of thousands of wrecks to explore, from shallow to deep technical dives. He became aware of GUE in the late 1990’s as his diving progressed into the technical realm, and eventually took cave training with GUE in 2003. He began teaching for GUE in 2004. Walker is an active project diver, and is currently involved with the MARS project in Sweden, and cave exploration in Izvor Licanke, Croatia. He is also chairman and founder of Ghost Fishing UK. He is a full time technical instructor and instructor evaluator with GUE, which he delivers via his company, Wreck and Cave Ltd. He sits on the GUE Board of Advisors, and several other industry bodies.

Unbeknown to many tekkies, sophisticated dive computers like Shearwater’s offer divers real-time dive planning tools that enable them to adjust their dive plan on the fly. This summary of erudite tech educator Mark Powell’s latest blog outlines some of the specifics. Be sure to check out his blog. 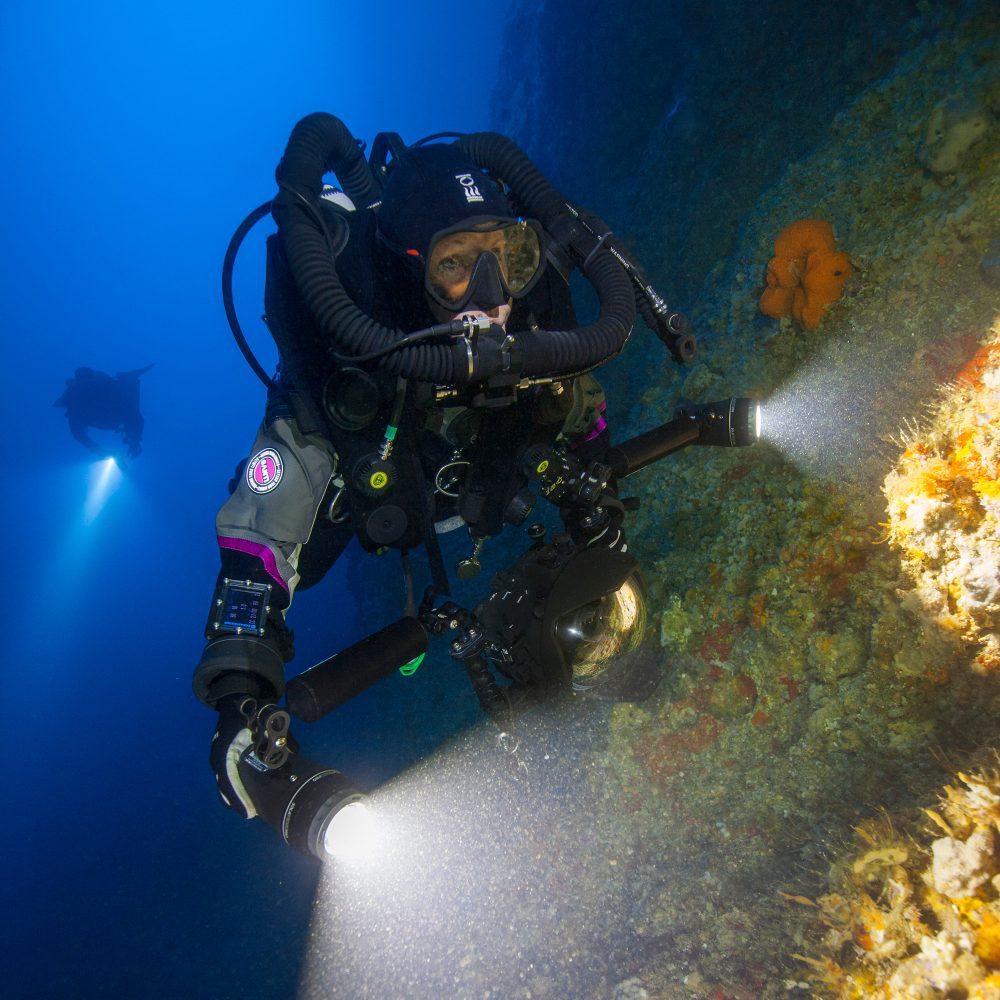 Find the full story in the Shearwater Blog

Mark Powell discusses decompression planning for technical dives with diving computers and PC planning tools. More time is spent planning technical dives than recreational dives. This is due to increased risks, greater depths, high gas usage at depth, increased decompression obligations, increased oxygen toxicity loading, and a host of other reasons. He describes how in the early days of technical diving, there were no PC planning tools or dive computers suitable for technical dive planning. Now computers are much more available and reliable. Also, the costs have reduced so much that many people have backup computers. The flexibility offered by the computer is in contrast to the rigid nature of tables. Unfortunately, when your backup is based on written tables, you can’t make full use of this flexibility. When you have a backup computer, suddenly this flexibility comes into its own and this is where significant changes to planning styles started to be adopted.

In reality, a dive computer gives a much more flexible tool for managing the dive. However, many divers keep the tables mindset even when using a very reliable and flexible planning tool. It is important to understand the features incorporated in your dive computer as they can provide additional information that can be used to manage the situation. On the Shearwater computer range, the NDL is shown on the display and counts down the time available until it reaches 0. Once the diver goes into deco, this field can be configured to show several other pieces of information. Any one of these can be selected to be shown in the NDL space once the NDL reaches zero. Alternatively, all of the following options can be viewed together by stepping through the display options: TTS, @+5, Δ +5, CEIL, GF99 setting, and SurfGF display. This article is intended to show that, far from removing the need to plan a dive, the sophisticated dive computers available today can help to improve the planning process. They can be used to provide a more realistic and more flexible planning tool. They can also be used to adapt the plan when the situation changes. This is only possible if the diver understands the tools they have at their disposal and practices using them.

After reading and digesting the information contained in this article, I would encourage you to make sure you know where to find the various display options on your computer. On your next dive look at the SurfGF value during the dive and watch the relationship between it and the NDL value. During the NDL ascent, look at the GF99 and SurfGF values. Then on a decompression dive, compare the CEIL and Stop Depth values as well as comparing the CEIL, GF99, and SurfGF values. It is essential that you understand all of the information in this article and practice it before using it to plan your dive or modify your dive plan. Like any tool, you must practice before using them for real. However, a bit of investment in time and practice will give you the ability to manage your ascent in a much more intelligent way than blindly following your computer or a fixed set of deco tables. 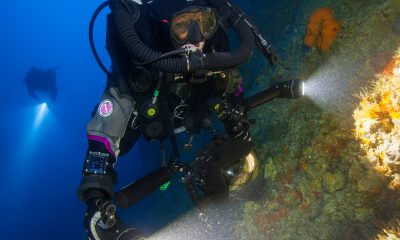 Unbeknown to many tekkies, sophisticated dive computers like Shearwater’s offer divers real-time dive planning tools that enable them to adjust... 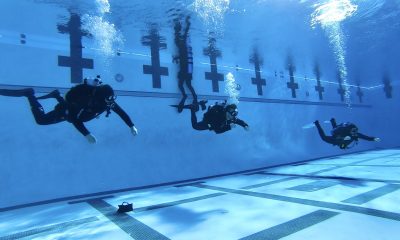 Off the Deep End? What You Should Know About Pool Chemistry

Now that pools are re-opening for swimming and training, we thought it fitting for us to take a bit of... 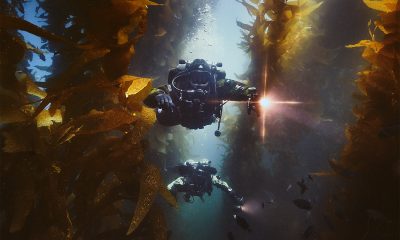 Teaching Again as the World Tries to Reopen

Conducting classes and supervising dive ops during the midst of a pandemic can be challenging. Here GUE instructor Francesco Cameli... 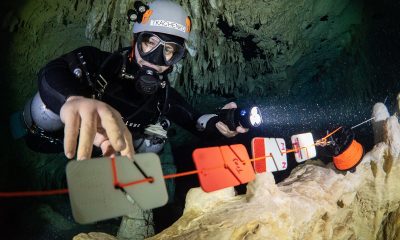 Zen and the Art of Mexican Cave Navigation

Do you know your arrows, cookies, REMS, TEMS, presence, personal and team markers? Singley or in combination? Jump protocols? If...