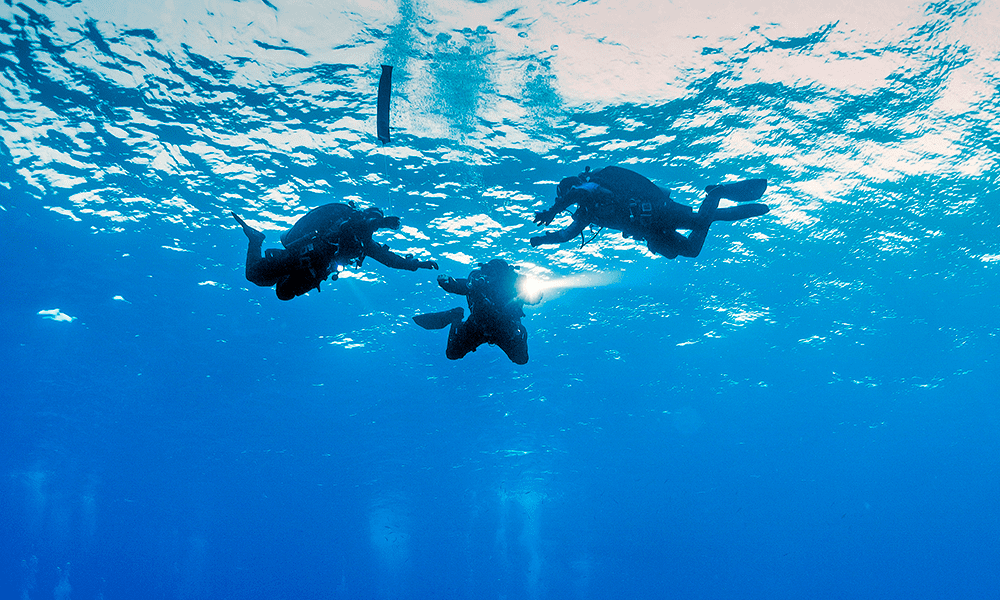 As a new diver, I’ve always wondered what tech divers do underwater during those long decompressions. It blew my mind when I would hear about 30-minute bottom times and six-plus hours of decompression. Some of the time there is nothing around, and the divers are just hanging there in blue water for hours!

Not all of us spend hours decompressing on dives. But, if you’re curious and mystified like me, or are looking for a new way to pass the time during those long hangs, here are some ideas from deco divers that I polled.

Are You Down for a Game of…

Times flies when you’re having fun, right? And one classic way to pass the time is games. Some divers are playing games like, rock-paper-scissors, tic-tac-toe, and hangman. With wetnotes, divers can even play things like Sudoku while 30 meters below the surface.

Some divers even take things a step further with mini travel checkers and chess boards. Or they pass the time by taking photos of themselves and their dive buddies.

She Swims with the Fishes

Some people are lucky and their decos can take place along reef walls or other environments teeming with life to see and explore. They may even get a visitor while hanging in the blue water.

Tech diver and explorer Louise Greenshields is loving her deco. “We’re totally spoilt over here in New Zealand at the Poor Knights Islands. We spend our deco searching out critters on the amazing reef walls that are here to enjoy 😉 #sorrynotsorry ”

Dr. Sonia Rowley is a research associate at the University of Hawaii at Manoa who is studying deep reefs. She doesn’t complain about her deco. “I love every minute of it and I have a hard time mustering up the willingness to get out of the water,” Rowley explained to me. “Case in point: my recent research trip to Balls Pyramid off Lord Howe Island where I had the constant companionship of a lot of Galapagos sharks. They were extremely playful and every time I swung around there was a ‘sea of noses’ following my fins. It was very funny.”

Killing Two Birds with One Stone

You can also make your time count by helping researchers gather data or completing more of your dive objectives during your deco along a reef or in a cave.

Dr. Rowley does this with her current research. “With regard to long decos, that depends on the dive site. Generally, I continue to work up the reefs and select study sites specific to this so more data and research can be achieved. If, however, it is bluewater deco then I play with the pelagics and plan my research, data analyses, gases for the following day, and take the opportunity to film the environment.”

Beto Nava and his team discovered the oldest human remains found in North America inside of the Hoyo Negro cave system in Mexico. He also conducts working hangs. “During the Hoyo Negro project we work on different tasks during the shallow part of our decompression, mostly from 50 ft/15 m and up. This helps us to increase our productivity by also doubling the time we work underwater, and it reduces the mental stress of a long decompression. We collect survey data for cartographic maps, like for example, line re-surveying, side walls measurements, and many others. Sometimes we capture images for 3-D models of sections of the shallow tunnels.”

Time Passes with Your Friends, Harry, Ron, and Hermione

Kirill Egorov, a tech and cave instructor and avid underwater explorer, has mastered his decompression entertainment. “I use a waterproofed iPod shuffle to listen to audiobooks (Harry Potter; The Long Ships, and The Hollow Hills). I also read paperback books (Alamo and  Day of Infamy). Older books are apparently printed on better quality paper; “I managed to read them over multiple dives. The newer ones barely survive a single dive.”

He’s not the only diver to read books underwater. GUE President Jarrod Jablonski has also taken the time to read during deco. “I would read paperback books and freeze them between dives, which seemed to hold them together longer. However, these often came apart and usually within the last few chapters. I missed many endings to various books as a result.”

Get Your Groove on at 9 Meters

There are also companies out there that make devices you can take with you to listen to your favorite tunes while underwater… how well they work is another story.

Jablonski is an avid explorer and has set world records in cave diving, so he’s spent his fair share of time in decompression.“I have used a variety of strategies and built my first underwater sound system in 1990. That was built with an old cassette player and custom light housing paired with normal headphones that I wrapped in balloons and dipped in a latex compound to seal. Sound quality was not great but it was a diversion. Later I would use proper, underwater headphones and a MP3 player.”

But even if you don’t have an underwater MP3 player, you can still enjoy some music. Mary Adams, a deco diver, passes the time by singing songs in her head. “I sing 80s rock songs,” she said. They’re 3 minutes long, and I also look for sharks and mantas.”

It may not be the same as belting it out in the shower, but it can definitely pass the time.

Namaste in the Water

Something as basic as just pondering your thoughts or taking the time to meditate can also be a good use of your decompression. Who knows, maybe you will solve one of the world’s pressing problems during deco.

Dive instructor Rich Walker uses this time to relax in his “nothing box.” “When I get to 6 m/20 ft and settle into my decompression, I go to my “nothing box,” open it, and immerse myself in the nothingness. I can stay there for hours. It’s my most powerful ally on a long decompression because time just slips away, much faster than watching the clock, reading a book, or reviewing the dive. Everyone should cultivate their nothing box.”

John Kendall, a dive instructor and photogrammetry guru, has spent his fair share of time in deco. “I have a (ridiculously expensive) waterproof android tablet that I use to watch movies during long cave deco. For open ocean it’s a bit harder, so then it’s normally a matter of just trying to both stay neutrally buoyant and awake.”

I wonder if there is a record for the greatest depth someone has watched a movie at? One or two movies and your deco is over.

Some technical divers are lucky and they get to spend their long decompressions inside of a decompression bell like those used by commercial divers.

Richie Kohler is one of the explorers on several of the recent expeditions to the Britannic that was lucky enough to have a commercial diving bell available to make his long deco tolerable.

“Our approach to combat boredom on our five to eight hour in-water decompression obligations has certainly changed over the past 11 years since my first Britannic expedition. In 2015 and 2016, Britannic operations had the opportunity to use the Russian Geographical Society Vessel, U-Boat Navigator, which had a diving bell for our operations. The clear acrylic dome provided a space where two fully geared divers could stand and be out of the water from the chest up. The bell had a camera and microphone for real-time conversation and observation of the dive team. The bell also had a hot water system that we used to warm our hands and heads during the long hangs. We could play music through the bell and there were various snacks inside the dry area (Swedish fish was a big hit) that we had not been able to enjoy before.

The team took turns standing out of the water, feeling the tug of gravity, easing jaw aches by leaving the loop out, and taking an air break in the bell. And the rotation of four divers taking turns in the bell also helped wittlle away the hours. We still had an in-water support diver watching the dive team and we practiced and prepared for a possible unconscious diver scenario where we would get the stricken diver in to the bell and out of the water quickly. The bell was a cozy little shack and I think it has ruined me for any future long decompression obligations.”

Others, particularly cave divers, are convinced that decompression habitats are the ticket. Some of these even have WiFi, which brings a whole new level to updating your Facebook status.

Andy Pitkin, one of the divers on the KUR Twin Dees project, is one of the few divers to have had the luxury of a WiFi habitat. “We try to be as comfortable as possible, and hopefully that involves use of a habitat. We have taken this to quite a level with watching movies on an iPad and even rigging up a wireless access point so we can get internet access down there.”

All of these divers are part of a team that is also keeping track of their teammates, the time, the depth, the environment, their gas, and any other factors that could influence their safety while at the same time trying to entertain themselves.

If you do something fun or intriguing during your deco stops that isn’t listed here, let us know at indepth@gue.com.

Amanda White is the editor for InDepth. Her main passion in life is protecting the environment. Whether that means working to minimize her own footprint or working on a broader scale to protect wildlife, the oceans, and other bodies of water. She received her GUE Recreational Level 1 certificate in November 2016 and is ecstatic to begin her scuba diving journey. Amanda was a volunteer for Project Baseline for over a year as the communications lead during Baseline Explorer missions. Now she manages communication between Project Baseline and the public and works as the content and marketing manager for GUE. Amanda holds a Bachelor’s degree in Journalism, with an emphasis in Strategic Communications from the University of Nevada, Reno.

A Camera Made For Divers, By Divers