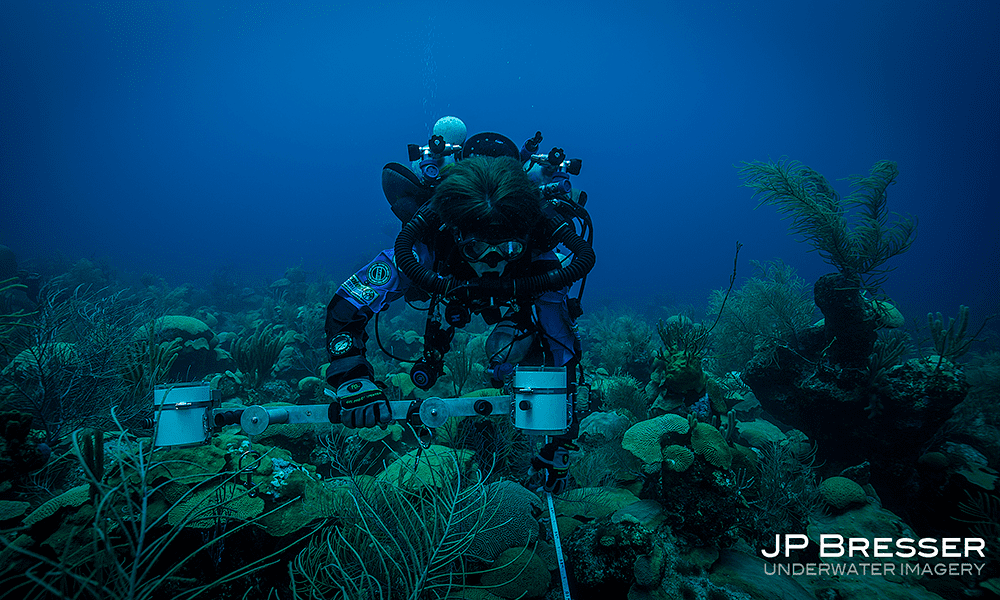 Bermuda is located in the northwestern Sargasso Sea, about 600 miles east of the closest point of the United States (North Carolina). In 2016, Global Underwater Explorers (GUE) collaborated with Global SubDive (GSD) and The Nekton Mission to conduct the XL Catlin Deep Ocean Survey and shallow underwater research using a team of GUE technical CCR divers and two Triton three-man submersibles around the main island of Bermuda. During the project, GUE volunteer divers and the submersible pilots established 92 Project Baseline stations total at the five dive sites. They also teamed with scientists from several universities, including Oxford and Stanford. Over the 30-day mission, five sites were explored and documented between 15-300 m/49-984 ft; the submersibles were deployed at 300, 200, and 150 meters and volunteer divers at 90, 60, 30, and 15 meters. Data was collected in the form of water samples, stereo video transects, specimen collection, and photographs.

Since the data collection efforts back in 2016, nine scientific papers have been written from the data collected. The papers range in topics from lionfish invading the upper-bathyal zone in the western Atlantic, to the black coral fauna of Bermuda and more. One of the biggest contributions from the mission was the the confirmation of the Rariphotic Zone, a new ocean zone from 130-300 m/400-1,000 ft.

The zones are the Altiphotic (0-40 m), Mesophotic (40-130 m), Rariphotic (130-300 m), and the Bathyal zone (300-3000 m).This new zone was first discovered by scientists from the Smithsonian Institute, but the existence was confirmed by the data collected in Bermuda with the discovery of over 100 new species. These include very small animals such as tanaids, dozens of new algae species, larger animals such as black wire coral that can stand up to 2 m high, and at least 13 new crustacean species.

An article on the  Science Alert website states that: “This [discovery] has led to a hypothesis that the new rariphotic zone may be a refuge for shallower reef fishes seeking respite from the warming waters and coral deterioration caused by climate change.” The discovery and confirmation of this zone is the missing link in understanding the dynamics between the different light zones in the ocean.

In a press release from Nekton, Alex Rogers, former Scientific Director of the Nekton Oxford Deep Ocean Research Institute (“Nekton”) and Professor of Conservation Biology at the University of Oxford, believes this discovery challenges current assumptions of biodiversity of life patterns. “Life in the shallower regions of the deep sea is so poorly documented it undermines confidence in our existing understanding of how the patterns of life change with depth,” says Professor Rogers.

The tremendous scale of the Project Baseline data collection effort has helped scientists to better understand the state of our oceans, create research protocols, and create an identification guide for biologists, divers, and naturalists. This was all based on the collection and analysis of 40,000 specimens and samples, 15,000 of water samples, 240 video transects, and 92 miles of geophysical data, some of which can be seen on Project Baseline’s spatial database and on their YouTube Channel.

This mission in Bermuda, along with the 2017 mission in Fiji, demonstrates how a coordinated team of divers and submersibles can significantly contribute to the scientific studies of both the shallow and deep aquatic environments by collecting massive quantities of usable data.

Header image by: JP Bresser. Dr. Todd Kincaid captures a video transect for scientists to study the health of the Sargasso Sea.

Amanda White is the editor for InDepth. Her main passion in life is protecting the environment. Whether that means working to minimize her own footprint or working on a broader scale to protect wildlife, the oceans, and other bodies of water. She received her GUE Recreational Level 1 certificate in November 2016 and is ecstatic to begin her scuba diving journey. Amanda was a volunteer for Project Baseline for over a year as the communications lead during Baseline Explorer missions. Now she manages communication between Project Baseline and the public and works as the content and marketing manager for GUE. Amanda holds a Bachelor’s degree in Journalism, with an emphasis in Strategic Communications from the University of Nevada, Reno.

Book Review: “We are the Ocean,” by Captain Paul Watson

An illustrated journey to teach kids about the importance of water.

When you read with children, they are connecting the words you say to the pictures on the page and to the things they see and do in their world.  That seems pretty obvious, but a lot of parents don’t make the connection that the stories you choose to read to your kids can have a great impact on your child’s outlook of the world and themselves.

So, for us underwater lovers and environmentalists, books that cover these topics are key to teaching our children how important it is to protect and love the planet we call home and the creatures that live here. Storytelling is a powerful way to not only encourage your child’s imagination and further their education, but it is also a great way to shape the way they will go out and care for the planet and the beings on it.

Such books covering topics related to environmentalism and protecting the ocean are growing within the children’s book industry. One such book that was released this year is “We Are the Ocean” by Captain Paul Watson who founded the activist organization Sea Shepherd, whose mission is to protect and conserve the world’s oceans.

In his book Captain Watson explores the connection between water and all living things. He takes a poetic stance toward describing how water sustains life and the continuous cycle through which it goes through all animals and plants. He explains this very simply for kids to understand the concept on the most basic level.

With beautiful illustrations by Sarah Borg that depict the adventure of two children and their dog friends, your child will learn about the importance of water and our direct relationship with it. The book teaches kids that water is in the cells of all plants and animals, including their own bodies. It even explains that readers drink water that was “once within the body of dinosaurs”. The book does a great job of sharing the concept that the ocean is a part of all of us and even has a Sea Shepherd boat in the illustrations. The hope is to instill young readers with a love for the ocean and a passion to take care of it as they grow older.  It rings true of Captain Paul Watson’s most infamous quote, “If the oceans die, we die”.

“We are the Ocean” is great for kids who are just learning to read, as it is written for kids ages 3-5 years old who are in preschool or kindergarten. This book would be a great addition to your child’s reading list and would make an excellent holiday gift for the ocean-loving kids in your life. You can find We are the Ocean online and in stores at Barnes and Noble, on Amazon, and in the Paul Watson Shop.

A Bit About Captain Paul Watson

Named by Time magazine as one of the “Top 20 Environmental Heroes of the 20th Century,” Captain Paul Watson, has been fighting for our planet for over 60 years.  For years he worked on freighters and deep sea vessels and it was because of this, as well as his participation in a  demonstration at the U.S. and Canadian border, that he and several others created Greenpeace. Watson and the group were demonstrating against nuclear testing on Amchitka Island in the Aleutians. He continued his activism, and in 1977, he founded Sea Shepherd Conservation Society, whose mission is to be “a global movement to defend, protect and conserve life and diversity in the ocean.” Today it truly is a global movement with chapters in over 40 countries and is one of the few organizations that is actively protecting wildlife. Their current campaigns are, “Saving the Vaquita”, “Preventing IUU Fishing”, “Protecting Wild Salmon”, “Beaked Whale Research”, “Protecting Sea Turtles” and “Ocean Cleanup”.

Read more about Capt. Paul Watson and other stories by Amanda

InDEPTH: Can We Save Our Planet? What About Ourselves? Interview With Sea Shepherd founder Paul Watson by Amanda White

InDEPTH: Where have all the young divers gone? Meet Rob Thomas and Young Divers International by Amanda White

Amanda White was one the minds behind InDEPTH when it first began, through her work as Marketing Director at Global Underwater Explorers.

Her main passion in life is protecting the environment. Whether that means working to minimize her own footprint or working on a broader scale to protect wildlife, the oceans, and other bodies of water.  Amanda holds a Bachelor’s degree in Journalism, with an emphasis in Strategic Communications from the University of Nevada, Reno.