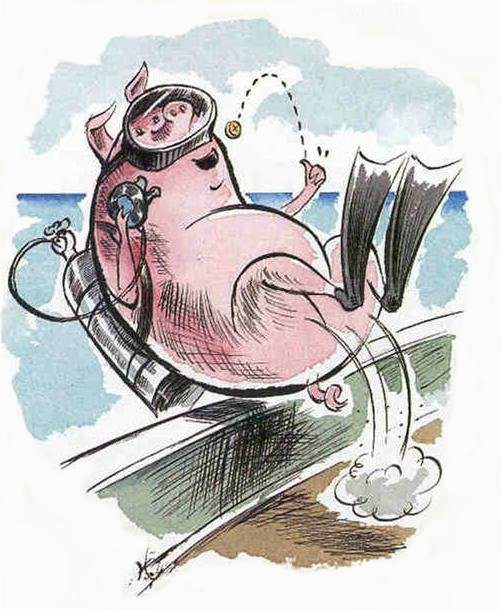 Once shrouded in secrecy, the work of the Navy Experimental Diving Unit (NEDU) has recently appeared in one non-fictional book, Bill Streever’s superb diving review, In Ocean’s Deep. It’s also been featured in four novels. The first novel was Max McCoy’s The Moon Pool, where, in his final chapter,  NEDU was featured. In the first two volumes of my Jason Parker Trilogy, I could not resist featuring NEDU, under a different name. However, one of the most interesting accounts is to be found in Dr. Susan Kayar’s novel, Operation Second Starfish: A Tale of Submarine Rescue, Science, and Friendship.

In the opening pages of Kayar’s book, you get a hint of the risks of experimental diving, as well as the interesting personalities of those who conduct research in experimental diving, and those who offer their minds and bodies to the science of deep-sea diving. It is an unusual mixture of science and guts that results in expanding the envelope of what is possible in diving.

In particular, the envelope that is expanded by Kayar’s quirky hero, an attractive half-Navaho research physiologist named Stella, is hydrogen biochemical decompression. Biodec as Kayar calls it, is a method of accelerating decompression by having divers ingest bacteria that consume some of the inert gas in their breathing medium, namely hydrogen.

To the readers’ great fortune, Susan Kayar is the best person in the world to describe the theory and reality of hydrogen biochemical decompression. She was the scientist who researched it at the Naval Medical Research Institute (NMRI) in Bethesda, Maryland. (Susan and I worked together at NMRI, although on different projects.)

Although some physicians and physiologists may scoff at the idea of Biodec, the concept was the brainchild of NMRI’s former Scientific Director, Dr. Lutz Kiesow, a brilliant man of letters and imagination. With that impetus, and the fact that French COMEX divers were at the time exploring ultra-deep hydrogen diving at around 613 m/2000 feet, the U.S. Navy built a hydrogen facility behind the NMRI hyperbaric complex; safely behind that complex. The reason for caution was that hydrogen is of course highly combustible in the presence of oxygen. (Think of the Hindenburg!)

Kayar’s research was showing promising results about the time Congress closed NMRI in 1998 through the action of BRAC ’95, Base Realignment, and Closure.

Driven by Kayar’s vivid imagination and passion for her work, Operation Second Starfish is a story like none other. It reveals where hydrogen diving and biochemical decompression could have taken us in the years between 1998 and the present. It might have, and perhaps still could,  provide a military diving capability far exceeding that of our country’s geopolitical rivals.

Hydrogen diving is not for the faint-hearted. Its added capability comes at a great cost; financially, logistically, and personally for the divers and researchers who share that risk.

Much to the author’s credit, the story she plays out for you in her entertaining book, is the very mission that would be worth the risk to human life. And that mission is the saving of submariners trapped in a disabled submarine, sitting on the sandy bottom of the Gulf of Mexico, in very deep water.

If you have ever wondered where diving is headed in the future, Kayar will show you the way. Operation Second Starfish is an entertaining story that will have you cheering for the heroine, and her sometimes gruff and cantankerous crew of heroic deep-sea divers.

John Clarke, also known as John R. Clarke, Ph.D., is a Navy diving researcher in physiology and physical science. Clarke was an early graduate of the Navy’s Scientist in the Sea Program. During his forty-year Navy career, he conducted physiological research on numerous experimental saturation dives. Two dives were to a pressure equivalent to 1500 fsw. For twenty-eight years he was the Scientific Director of the Navy Experimental Diving Unit in Panama City, FL. Clarke has authored a techno-thriller science fiction series, the Jason Parker Trilogy. All three volumes, Middle Waters, Triangle, and Atmosphere, feature saturation diving from depths of 30 m/100 ft to 762 m/2,500 ft. The deepest dives involve hydreliox, a mixture of helium, hydrogen and oxygen. UFOs, aliens, and an uncaring cosmos lay the framework for political and human intrigue both on and off-planet. His websites are www.johnclarkeonline.com and www.jasonparkertrilogy.com. His thriller series is available at Amazon and Barnes & Noble.

The NSS-CDS Is Updating How It Teaches Cave Diving