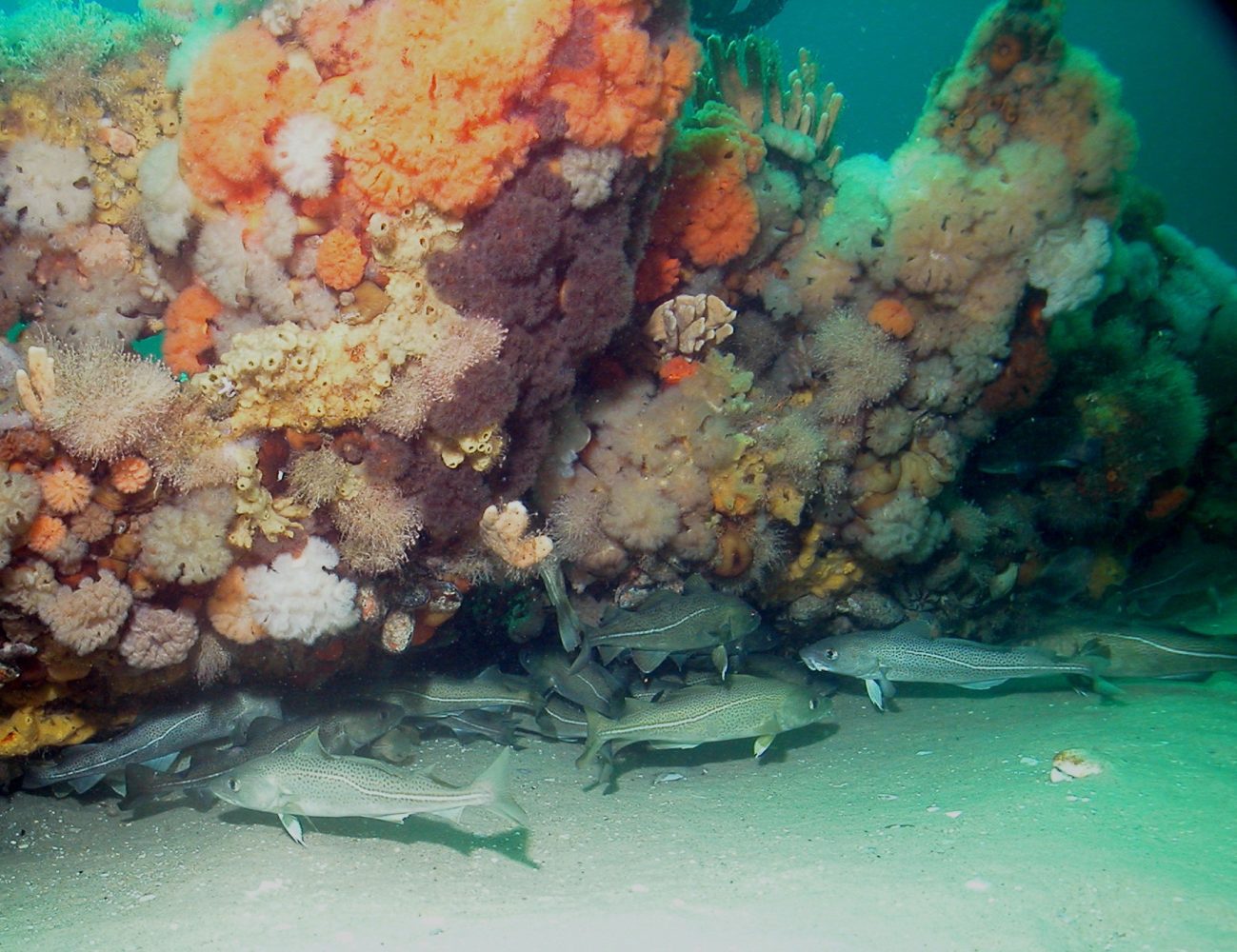 Header image: Divers in the sanctuary may encounter areas with bountiful marine life. Here cod swim under the remains of a shipwreck covered with frilled anemones and other attached invertebrates

When policymakers face the challenge of protecting irreplaceable marine archeological sites, the fishing industry and conservation interests are often at odds. But they don’t have to be.

A diverse stakeholder group–including divers, historians, and fisherman–has united to protect the Stellwagen Bank National Marine Sanctuary’s shipwrecks. They aim to preserve the irreplaceable historic resources in the Sanctuary while protecting fishermen and their gear from danger and damage. To accomplish these goals, NOAA is piloting the Shipwreck Avoidance Program (SAP). SAP is an innovative program whose purpose is to encourage commercial and recreational fishermen to voluntarily avoid disclosed shipwreck locations.

Through a SAP initiative, NOAA published to the public the locations of 11 historic shipwrecks, reversing its previous policy of non-disclosure. In return, NOAA officials have requested that fishermen voluntarily avoid the designated sites. During the pilot phase, officials will monitor voluntary compliance to determine SAP’s effectiveness.

Fishing Near Wrecks Offers Possibilities for Profit and Danger

Sanctuary archaeologists have located 47 historic shipwrecks in Stellwagen Bank. Historical records indicate that at least 200 more historic and modern vessels that sank within sanctuary boundaries lie somewhere beneath the surface.

The wrecks share Sanctuary waters with a fleet of commercial and recreational fishing vessels. Commercial fishing, including trawling and scallop dredging, is allowed in most of the Sanctuary and is regulated by the National Marine Fisheries Service. Fishing captains have found that trawling close to these wrecks can bring in a profitable catch of many species of fish that find refuge nearby. But, these benefits come with risks to the crew and their equipment.

Frank Mirarchi, a retired trawler fisherman and Sanctuary Advisory Council Member, supports SAP. “I have lost two nets and done considerable damage to several others throughout my career by encountering random pieces of wreckage scattered on the seabed,” he said. “Under poor weather conditions, entangled gear can capsize a boat, jeopardizing the crew’s safety,” he added.

Many wrecks have been damaged or destroyed by commercial fishing gear. John Perry Fish is a sonographer and the co-discoverer of the Portland steamship, the sanctuary’s most iconic historic wreck and a memorial site for the 192 passengers and crew lost when it sank. He explained that, “Trawl nets and floats can become ensnared on wrecks like the Portland and remain at the site for decades.”

Wreck divers, like fishermen, have good reason to protect sites from further damage. Before SAP, shipwreck locations were not disclosed to the public because officials were concerned divers would remove or displace artifacts. This concern has greatly diminished with the help of divers’ advocate Heather Knowles, co-founder of Northern Atlantic Dive Expeditions, Inc. and Chair of the Sanctuary Advisory Council.

Knowles believes that divers are “fundamentally a conservation constituency.” She said that wreck divers want to see the sites up close and rarely disturb them. “After divers explore a wreck,” she added, “they want to know more about its history and see that it is protected.” Knowles is confident that SAP will help fishermen avoid hazardous sites while allowing more wreck divers to bring shipwrecks’ stories to the public.

In addition to fishermen and divers, other marine sanctuary stakeholders are in support of SAP because of shipwrecks’ importance to archeological research and biodiversity.

Sanctuary marine archaeologist Dr. Calvin Mires, an experienced wreck diver, believes that the public will care more about preserving shipwrecks when they better understand New England’s maritime cultural landscapes. Historic shipwrecks are “non-renewable resources” because they cannot be replaced once they are destroyed. While archeologists can learn about historical ship building techniques by studying a ship’s exterior, experts can achieve a better understanding of New England’s 19th century economy by studying a ship’s cargo. Mires believes the sites also share a deeply relatable human story. Ships like the Portland were “traveling hotels” in which crew, staff, and travelers lived and worked closely together. In many ways, New England’s historic maritime transportation industry lessened the strict socioeconomic hierarchy and rampant racial inequality of that time period: the industry offered high wages and interdependent working environments onboard.

Heather Knowles believes that SAP also creates an opportunity for citizen science. Many wreck divers, she said, “are investing in sophisticated underwater cameras. As more sites are disclosed to the public and explored, these photographs can be shared with marine archeologists, shipwreck ecologists, and the public, helping to grow scientific knowledge about the wrecks.”

NOAA officials have concluded that a non-regulatory voluntary compliance program such as SAP is the best way to protect our nation’s maritime heritage while sustaining the fishing and wreck diving industries. Ben Haskell, Deputy Superintendent of the Sanctuary and SAP manager, explained that “This program gives the fishermen the opportunity to avoid the dangers associated with their gear interacting with shipwrecks while protecting these historic resources without the implementation of an added layer of regulation.”

NOAA officials currently utilize a combination of two existing satellite-based vessel tracking systems—the Vessel Monitoring System (VMS) and the Automatic Identification System (AIS). VMS is required on all commercial trawl and dredge vessels and requires that the captains report their positions every 30 to 60 minutes. “The problem with this system,” noted Haskell, “is that position data do not reveal fine-scale positioning and whether a vessel has gone around or over a shipwreck site.” AIS is a vessel collision avoidance program that the US Coast Guard requires of all vessels over 20 m/65 ft. “The advantage of AIS is that it provides vessel positions every five minutes,” added Haskell, “but its disadvantage is that the system is not used on all fishing vessels since many are smaller than 20 m/65 ft. However, several smaller fishing vessels use AIS due to its safety benefits.”

The future of SAP and the sanctuary’s shipwrecks is still uncertain. If the program successfully encourages voluntary avoidance, NOAA officials will likely disclose the locations of more sites. By working together toward a shared goal, stakeholders can preserve these irreplaceable resources while sustaining fishing and wreck diving in sanctuary waters.

For more information on SAP or to report a shipwreck location contact: ben.haskell@noaa.gov.

Ariel Silverman is an ocean sustainability journalist and policy volunteer with Stellwagen Bank National Marine Sanctuary. She is currently on a leave of absence from her studies at Harvard University.

Related Topics:shipwrecksV 3.5Wreck diving
Up Next

Book Review: “We are the Ocean,” by Captain Paul Watson

An illustrated journey to teach kids about the importance of water.

When you read with children, they are connecting the words you say to the pictures on the page and to the things they see and do in their world.  That seems pretty obvious, but a lot of parents don’t make the connection that the stories you choose to read to your kids can have a great impact on your child’s outlook of the world and themselves.

So, for us underwater lovers and environmentalists, books that cover these topics are key to teaching our children how important it is to protect and love the planet we call home and the creatures that live here. Storytelling is a powerful way to not only encourage your child’s imagination and further their education, but it is also a great way to shape the way they will go out and care for the planet and the beings on it.

Such books covering topics related to environmentalism and protecting the ocean are growing within the children’s book industry. One such book that was released this year is “We Are the Ocean” by Captain Paul Watson who founded the activist organization Sea Shepherd, whose mission is to protect and conserve the world’s oceans.

In his book Captain Watson explores the connection between water and all living things. He takes a poetic stance toward describing how water sustains life and the continuous cycle through which it goes through all animals and plants. He explains this very simply for kids to understand the concept on the most basic level.

With beautiful illustrations by Sarah Borg that depict the adventure of two children and their dog friends, your child will learn about the importance of water and our direct relationship with it. The book teaches kids that water is in the cells of all plants and animals, including their own bodies. It even explains that readers drink water that was “once within the body of dinosaurs”. The book does a great job of sharing the concept that the ocean is a part of all of us and even has a Sea Shepherd boat in the illustrations. The hope is to instill young readers with a love for the ocean and a passion to take care of it as they grow older.  It rings true of Captain Paul Watson’s most infamous quote, “If the oceans die, we die”.

“We are the Ocean” is great for kids who are just learning to read, as it is written for kids ages 3-5 years old who are in preschool or kindergarten. This book would be a great addition to your child’s reading list and would make an excellent holiday gift for the ocean-loving kids in your life. You can find We are the Ocean online and in stores at Barnes and Noble, on Amazon, and in the Paul Watson Shop.

A Bit About Captain Paul Watson

Named by Time magazine as one of the “Top 20 Environmental Heroes of the 20th Century,” Captain Paul Watson, has been fighting for our planet for over 60 years.  For years he worked on freighters and deep sea vessels and it was because of this, as well as his participation in a  demonstration at the U.S. and Canadian border, that he and several others created Greenpeace. Watson and the group were demonstrating against nuclear testing on Amchitka Island in the Aleutians. He continued his activism, and in 1977, he founded Sea Shepherd Conservation Society, whose mission is to be “a global movement to defend, protect and conserve life and diversity in the ocean.” Today it truly is a global movement with chapters in over 40 countries and is one of the few organizations that is actively protecting wildlife. Their current campaigns are, “Saving the Vaquita”, “Preventing IUU Fishing”, “Protecting Wild Salmon”, “Beaked Whale Research”, “Protecting Sea Turtles” and “Ocean Cleanup”.

Read more about Capt. Paul Watson and other stories by Amanda

InDEPTH: Can We Save Our Planet? What About Ourselves? Interview With Sea Shepherd founder Paul Watson by Amanda White

InDEPTH: Where have all the young divers gone? Meet Rob Thomas and Young Divers International by Amanda White

Amanda White was one the minds behind InDEPTH when it first began, through her work as Marketing Director at Global Underwater Explorers.

Her main passion in life is protecting the environment. Whether that means working to minimize her own footprint or working on a broader scale to protect wildlife, the oceans, and other bodies of water.  Amanda holds a Bachelor’s degree in Journalism, with an emphasis in Strategic Communications from the University of Nevada, Reno.