We are pleased to announce that we will be holding Rebreather Forum 4 (RF4), Thursday through Saturday, 20-22 April 2023 at the old University of Malta campus in Valletta, Malta, sponsored by DAN Europe, DAN, PADI and Heritage Malta. The purpose of the scientific and trade-only meeting is to advance the diving community’s state of knowledge regarding rebreather technology and its uses, with the goal of improving rebreather diving safety and performance.

We plan to hold a Non-Caustic Cocktail Reception on Wednesday evening before the conference, a Friday bag lunch, and a Saturday evening banquet with guest speaker. In addition, we will have an exhibit area for participating vendors to display their equipment, near to the main conference room. Vendors interested in sponsorship opportunities, exhibit space and or conducting demos, please contact the organizer/convenor (see below).

We are expecting several hundred attendees representing technical diving equipment manufacturers, training agency personnel, instructors and instructor trainers, diving and hyperbaric medicine researchers, scientific and military diving personnel, government health and safety officials, and other organizations involved in rebreather diving. The meeting is not intended for diving consumers. If you are professionally involved in rebreather diving, we encourage you to attend. There will be a limited number of tickets available.

The RF4 Program and Proceedings

Malta is surrounded by hundreds of historical shipwrecks, including nearly 20 archaeologically-significant wrecks under the management of Heritage Malta. With their support, the three-day program will be augmented with organized diving on various historical wrecks in Malta the week immediately preceding the meeting (April 12-19) and additional shipwreck diving in Gozo the week after (April 23-30). This will include the exclusive opportunity for RF4 attendees to dive the wrecks in Malta’s newly launched deep water archaeological park. Diving activities will be coordinated by RAID, Heritage Malta and their registered dive centres. In addition, there will be workshops, and demonstrations held prior to the meeting.

SAVE THE DATES-GET IN THE LOOP

We are still in the process of finalizing conference hotel details, schedule, registration, pricing, and diving operations. However, if you go to REBREATHERFORUM.tech, you can enter your contact information, preferences, and affiliations, and we will email you conference updates and registration information as soon as they become available.

The site will eventually serve as the repository for all of the information about the meeting, including online conference registration. Please save the dates and share the information with your colleagues.

Since its introduction in 1973, the 11-liter Aluminum 80 cylinder has become nearly ubiquitous in the sport diving world, supplying both tourist divers and stage-carrying tekkies with compressed breathing gas [Ed. note: compressed air is for tires!] Here cylinder inspection safety pioneers Mark Gresham and Bill High, principals of PSI-PCI Inc. dive into some of the colorful history that made the “Ally 80” what it is today!

Introduced to the scuba world in 1973, the 6351-alloy, 11-liter aluminum 80, filled to 3,000 psig/207 bar quickly became the recreational diver’s vehicle into the underwater world, and later, the go-to stage bottle for tekkies. It came with some good features and a few problems yet to be discovered. It replaced Alcan Aluminum’s (Luxfer) first aluminum model rated at 2,475 psig/171 bar, the so-called floater, introduced in 1971.

Why did the “80” gain dominance so quickly? It looked cool, of course, compared to its rather drab competitor the 3AA steel 68 cf at 2250 psig (12.5 l/153 bar). Luxfer claimed the “80” held more air and was nearly neutrally buoyant. That was what divers wanted. The cylinder was slightly lighter compared to the common steel “72,” (13 l cylinder) and it was generally cheaper than steel.  Perhaps its best feature was its superior resistance to corrosion. Divers preferred the flat-bottomed cylinder so it could stand without a boot.

The “80” had a down-side. At 3,000 psig/207 bar, that pressure was a bit high for most compressors in use. Many dive stores could not fill them completely. More importantly, its diameter was slightly greater than the common steel cylinder, so it would not fit into the non-adjustable backpacks.

Alcan (Luxfer) was not the first to make an aluminum scuba cylinder. In the mid-fifties, the US Navy purchased many aluminum cylinders from Pressed Steel Tank Co. which were not Interstate Commerce Commission (ICC) approved for commercial use. Those cylinders were made by a spinning process that required a plug to close the round bottom. By the 1970s, some of those cylinders found their way into recreational diving; however, they were illegal to fill or transport.

For several years, the Luxfer “80” was the only kid on the block. In 1981, the competitors Walter Kidde Co. and Catalina Tank Co. began making competitive cylinder models using the somewhat different alloy, 6061.

The bright future for the “80” continued into the 1980’s. Adjustable backpacks solved the size issue. Corrosion resistance was evident. Several colors were available. There were two things we did not know. First, in 1982 and 1983, Luxfer produced its cylinders using the 6351 alloy with a somewhat elevated trace lead content. That became an issue later. Catalina and Kidde continued using 6061 alloy. Secondly, a metallurgical issue raised its ugly head.

By 1985, aluminum SCBA cylinders were being made for firefighters. A special 4500 psig/310 bar model obtained its high-pressure rating by overwrapping the cylinder with fiberglass. One such cylinder ruptured explosively. The cause was a crack developing in the crown-neck area. Testing suggested the cause then called room temperature grain boundary creep would not affect the lower pressure 3,000 psig/207 bar Aluminum 80. However, in 1989, an “80” did fail in the same manner.

The common dive store annual visual inspection protocol did not include an assessment of the cylinder inner crown and thread area. The Professional Scuba Inspectors Company (PSI) immediately consulted with federal and industry specialists, and then developed a detailed protocol for the precise examination of all aluminum cylinders made from 6351 alloy, including the most popular “80”. Unfortunately for all aluminum cylinders, they were lumped into a bad cylinder mentality by far too many divers and dive leaders. It was a 6351-alloy issue not an all-aluminum issue.

PSI began a call to the dive-and-fire industries using its trained cylinder inspectors to immediately implement the vital inspection for crown-neck cracking. Strangely, there was wide resistance. Skin Diver Magazine would not publish an informative article on the need for this additional inspection step, stating that such announcements would alarm the dive community. The Diving Equipment and Manufacturing Association (DEMA) stated that PSI was simply pushing its program, and therefore would not notify its members.

The dive industry did become alarmed because hundreds of our faithful “80” were found to be cracked, and several failed explosively with tragic results. Fortunately, the inspection protocol gained acceptance, and flawed cylinders were removed from service before rupture. While only a fraction of one percent of the several million 6351 alloy cylinders were found cracked, the “80” reputation took a serious hit. Also, matters were exacerbated by learning that those 1982-83 Luxfer cylinders with the slightly higher lead content were more susceptible to cracking.

Both Kidde and Catalina cylinders were accused by the ill-informed as being prone to cracking. That was not the case, as both used the 6061 alloy, not Luxfer’s 6351. In 1989, Kidde stopped making scuba cylinders. By that year, Luxfer had changed its metal composition, bringing all aluminum 80 (and other sizes as well) cylinders back to their dominant position for scuba divers.

By the year 2000 and beyond, a wide range of cylinder sizes and pressure ratings in both steel and aluminum overshadowed the aluminum 80’s grand history. Today, the steel 100 cf/12 l model at 3442 psig/237 bar, easily outsells the 3AL 80. In both the US Northeast and Northwest, steel sales are as much as 10:1 over aluminum.

Currently, most dive resorts still rely on the workhorse “80.” That may change, as the cost of aluminum alloy has risen dramatically and is expected to continue in coming months. Nonetheless, when given proper care, those 80’s now serving so many divers will be with us for years to come.

Mark Gresham began diving as a young boy with his father. He dove while serving in the U.S. Marine Corps. As a civilian diver, Mark became a PADI instructor and managed a scuba retail business. He joined Professional Scuba inspectors Company in 1996 and became General Manager of operations in 2004. With his wife Sherry, they became owners of the company in 2005.

Bill began diving in 1955. He joined NAUI as instructor 175 in 1961. Throughout his career as a Fisheries Research Biologist he utilized scuba, undersea habitats, and deep submersibles to conduct fisheries research. Bill served as NOAA’s first National Diving Officer and was a U.S. representative to a United Nations committee.

Bill saw the need for a practical cylinder inspection program when all too many cylinders failed explosively. He founded the Professional Scuba Inspectors Company in 1983.  By 1990, PSI cylinder safety training became the standard for a wide range of cylinder types. 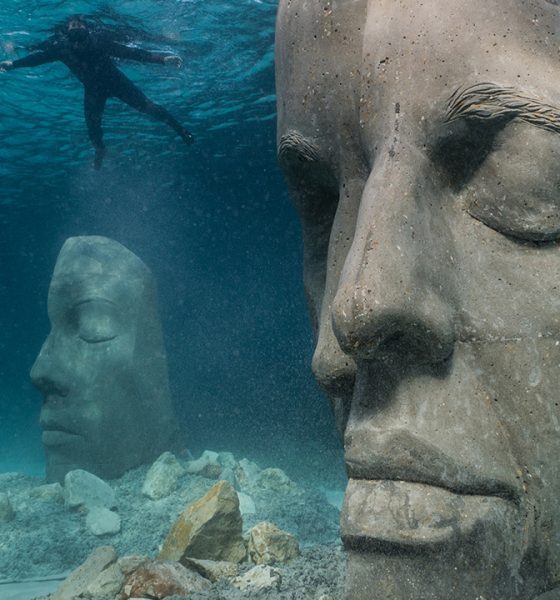 Sculptor Jason deCaires Taylor evokes the sacred, populating underwater seascapes with corporeal objets d’art, meant to be assimilated by the... 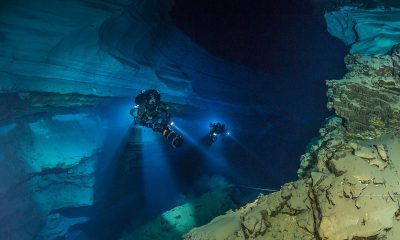 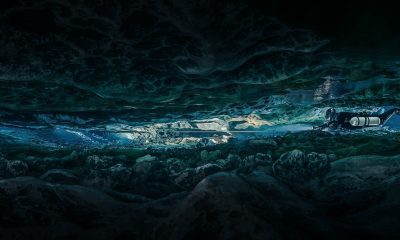 Plan The Shoot, Shoot The Plan

For The Love Of The Water: The Remarkable Story of Underground Aficionado Alessandra Figari

The Future Of Food Is In The Sea

Getting to the Bottom of the HMS Regent Mystery

Can We Create A Safety Culture In Diving? Probably Not, Here’s Why.