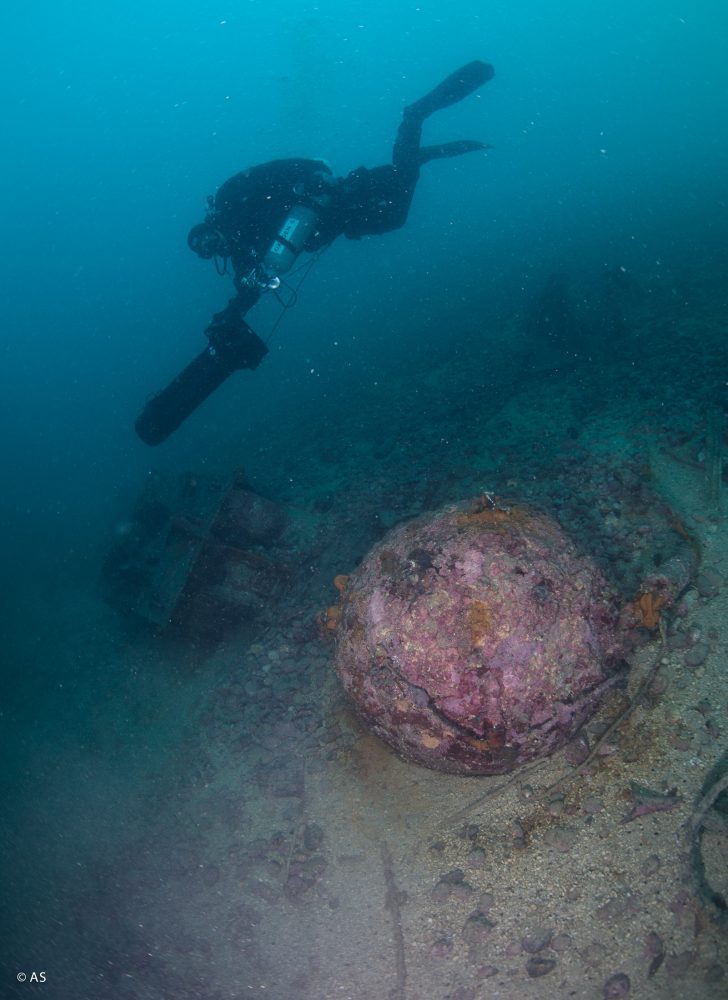 This project, titled Project UMS (Underwater Mine Search), was initiated by GUE divers from Croatia along with members of the local club “Policeman Diver.” Joining our efforts with active police divers from the Croatian Special Task Force’s Bomb Squad, our goal was to help locate, document and record using 3D photogrammetry, lost naval mines from WWI and WWII so they can be defused and removed. Authorities estimate there are as many as 5000 naval mines from the two world wars that still remain in the Adriatic sea.

During the last days of December 2019, while the citizens of Rijeka, Croatia, were preparing for New Year’s Eve, my dive buddy and I discovered something that we did not expect to see—an abandoned naval mine of great destructive power during a routine exploratory dive. The mine is laying on the bottom at a shallow depth of 25m/82ft near the Rijeka city beach, which has been frequented by citizens and tourists over the last 80 years. Please note, #Redbull doesn’t really give you wings, but finding one of these does!

Rijeka is a city of turbulent, dynamic, and troublesome history and recently, it has been designated the “European Capital of Culture” for 2020. Over the ages, various military forces marched through it, always bringing fear and leaving destruction behind. During the last 100 years of its rich history, Rijeka has flown seven national flags. As an important geostrategic city in the Adriatics, it is always a location of interest.

We located the mine near an elite beachfront area of Rijeka near the Villa Olga approximately 20m/65 ft from the shore. The villa used to be a command post of Nazi Germany occupying forces after Italy switched sides in WWII. The reality of this can still be seen from the SS insignia as well as a swastika on the villa’s fence.

However, it is not the villa or the fence that can do harm now, unlike the mine which rests just offshore. Based on our research, the mine was deployed sometime from 1943-1945 to protect the coastline from a possible Allies surprise seafront attack. My fellow diver and photographer Aleksandar Stančin was able to confirm it is an EMC type II naval mine, containing up to 250 kg, 551 pounds of TNT, which makes it more than capable of damaging and sinking a ship.

It could easily damage or destroy local sewers and or seriously hurt swimmers if it detonated regardless of the fact it is lying in 25m/82 ft of water. Of course, we immediately reported our discovery to the local authorities who brought in a special police task force (underwater unit) from Zagreb to confirm the finding of an active naval mine. Ironically, nearby the mine, there were several artefacts from the beach, including a child’s diving mask, flip flops, and several other items.

By a twist of fate, this mine and many others were laid by a ship called Kiebitz under Nazi Germany. The ship, which was basically a banana cargo ship originally named Ramb III, was acquired when Italy changed sides and Germany took control of the area. Ironically, the Kiebitz sank in the port of Rijeka during an Allied raid at the end of 1944, when it made contact with one of the mines she had deployed.

After WWII, the Kiebitz was salvaged and restored to seaworthy status, but this time with a different role. The ship, renamed The Peace Ship Galeb, became a symbol of peace in Josip Broz Tito’s Yugoslavia when he traveled and hosted political meetings and events on the ship.  The Galeb is currently being renovated as a part of the European Capital of Culture project to serve as a museum of those times.

Born in 1972, Velimir Vrzic started diving at the age of 17 as part of the C.M.A.S. Federation in Yugoslavia. After Croatian independence, he joined the police force from 1991-1995 and was decorated by the President of Croatia three times for his military operations and service to the country. After the war, back in the maritime police, Velimar worked as a crime investigator at sea. After completing an anti-explosives course, he performed special jobs for the Ministry of the Interior. He then met his future dive instructor, Mario Arena, and joined the GUE. In 2012, Velimar underwent heart surgery to close his open PFO (patent foramen ovale). In 2013, at the age of 40, he retired from the police force and opened a non-profit diving club called Policeman Diver. The organization works with state agencies to protect the sea in Croatia. He is also co-founder of the cave project “Morpheus.” Velimar is happily married to his wife, Pamela Vrzic, who is also a diver.

Jumping into the Deep End