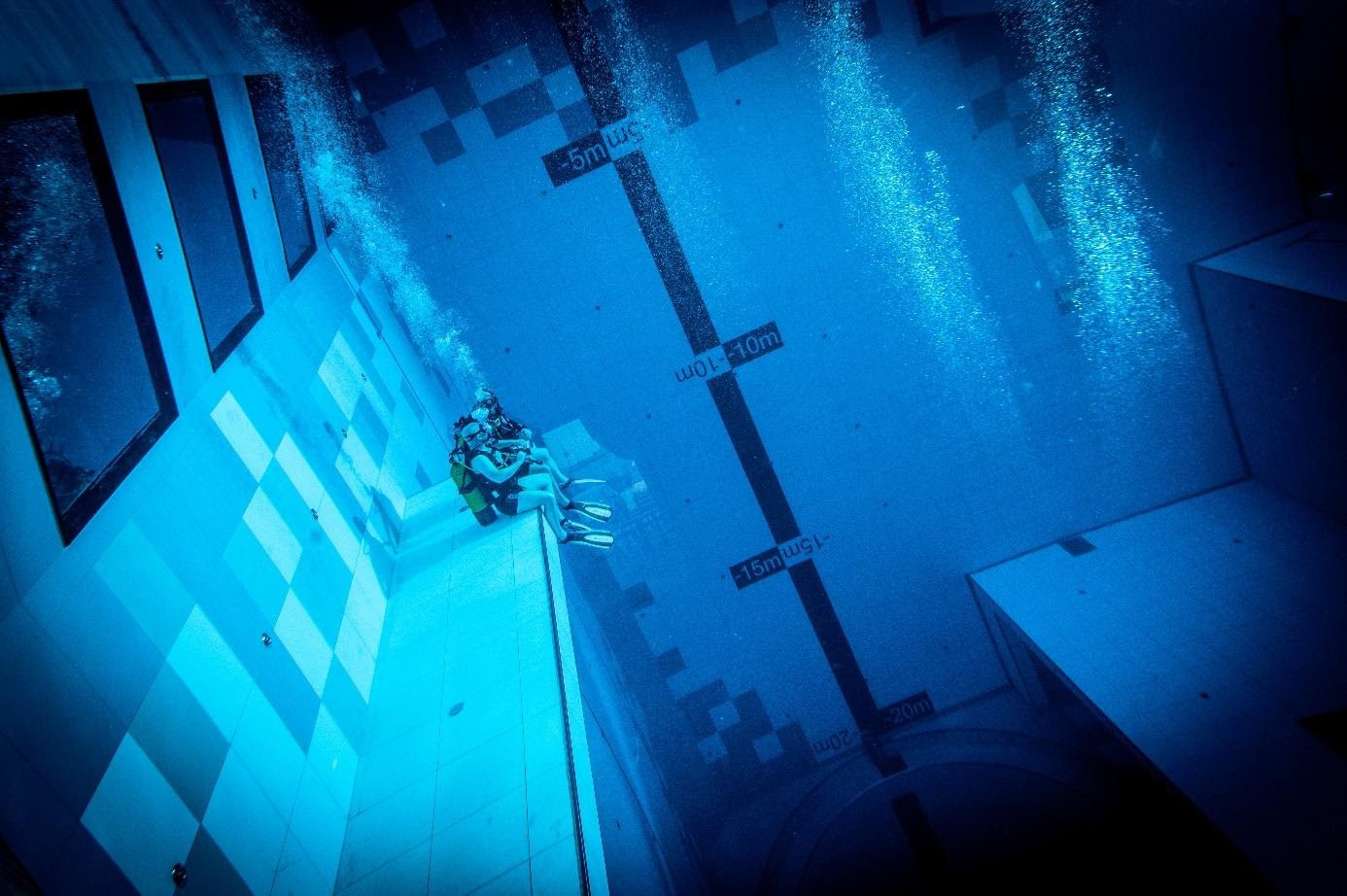 When landlocked divers can’t travel, turning to diving pools to extend the fun and relaxing sensation of scuba diving can be the exact pressure release valve they need. Some scuba divers question the point of diving in a pool at all. But, since the early 2000s, Nemo 33 has been shaking up preconceived ideas of pool diving’s possibilities and utility, and so have its successors.

Let’s do a roundup of the deep diving pools worldwide (all pools deeper than 30 m/100 ft are currently located in Europe). What has been the motivation behind these daring projects? Are there any takeaways for the diving community? Thanks to their 365-days-per-year stable conditions, it would seem so—in most cases.

Pioneers often start as dreamers. John Beernaerts, both a civil engineer and a scuba diving instructor, dreamt of recreating French Polynesia’s diving conditions right in the heart of Belgium. Beyond the catchy pitch, the idea was to provide divers-in-training with easier and safer conditions  than the murky and cold waters of the Belgian quarries.

Being the first to dare building such a deep pool wasn’t without challenges. Beernaerts produced the first sketches in 1996, and after three years of engineering studies (21 versions of the facility were simulated) and four years of construction, the pool opened in 2004.

Despite being the first to push the limit of what a deep diving pool can be, it is striking to note that Beernaerts wanted to make his project as sustainable as possible. By heating the pool water to 33°C/91°F  using solar panels, Nemo 33 uses less energy than a traditional swimming pool, which is usually heated 5°C/9°F lower.

On many occasions, Nemo 33 has been used as an underwater studio for filming crews, a training facility by security professionals, and a research facility for scientific and medical hyperbaric studies. The diving facility keeps innovating by offering underwater exhibitions and even the possibility to book a table for dinner in the air bubble at 7 m deep in the pool. Thanks to its large reception areas and a renowned Thai restaurant, Nemo 33 has become a popular venue for incentive events and group trips.

When asked about the current race to the deepest pool, Beernaerts answered, “For us, after holding the record for ten years, it’s about being the safest diving pool in the world now. I can’t deny how much coverage holding the world record got us. We initially had an actual depth of 35 m/114.8 ft. After we lost the record, we decided to go backward and mount a platform at the bottom of the shaft to be precisely at 33 m/108 ft deep, as our name suggests.

I remain perplexed about the new projects announcing 50-60 m/164-197 ft deep pools and their goals beyond the publicity. I’m more concerned about the level of awareness about nitrogen narcosis. With clear and warm water, the perceived easiness could tempt beginner divers to descend to depths they shouldn’t go. It’s vital to remain within the limits of one’s training.”

Nemo 33 remains the most affordable deep diving pool in the world. A dive for certified divers costs 25€/$30 USD, any day of the week. The fins, mask, BCD, and regulator were initially included in the fare, and you had only to bring your dive computer (or rent it at 3€/$3.62USD per day). However, to comply with COVID-19 safety rules, Nemo 33 currently encourages divers to bring their gear. Equipment can be rented at 2,50€/$3 USD per piece per dive.

With an extra depth of 9 m/30 ft, Y-40 became the new record holder when it opened its doors in 2014. Its founder, Emanuele Boaretto, an architect, had dreamed about this project since the 1980s. In 2010, he finally went forward, assisted by scuba and freediving instructor Marco Mardollo. As for a venue, there was no better place than his family’s spa/hotel business; Y-40 is, indeed, part of the Hotel Terme Millepini, in Montegrotto Terme,  about 50 km/31 miles west of Venice.

Experience some deep joy at Y-40

With more than a thousand scuba diving certifications per year, Y-40 prides itself on being the world’s largest dive center. However, over the years, Y-40 developed a strong reputation among the freediving community. Famous athletes like Alexey Molchanov, Guillaume Néry, and Herbert Nitsch, known for their depth records, have already visited the place. Y-40 can even count on Umberto Pelizzari; the freediving champion, known for his records in all the competitive apnea disciplines, is the president and founder of Y-40’s Apnea Academy.

On top of this, like most diving pools, they can cater to filming crews for underwater shooting and security professionals who need training, and they distinguish themselves in the field of scientific and medical hyperbaric studies.

Since opening, the most important diving medicine centers from the United States, Europe, and South Africa have conducted experiments there. The distinguished list includes the DAN Europe Foundation, which led research with the University of Padua on the effects of depth on divers’ bodies and, more recently, the effects and risks of COVID-19 for divers.

In 2021, Y-40 opened a medical surgery with doctors with diving expertise. They specialize in hyperbaric medicine, cardiology, neurology, nutrition, dentistry, and otolaryngology.

The current record-holder for the deepest diving pool was opened at the end of 2020. Its founder is Michal Braszczynski, the owner of Aerotunel, a facility that simulates skydiving.

Located in Mszczonów, about 50 km/31 miles south of Warsaw, the Deepspot pool has an impressive 8,000 m3/2,113,376 gallon internal volume of 33°C/91°F water. Like Y-40, it features a transparent tunnel suspended into the water and has a cave system for training in overhead environments.

Take a deep breath and Dive Into Deepspot

The Blue Abyss project aims to redefine a deep diving pool. While still in the planning phase, we have enough information to get excited about this new contender, which plans to open in 2023 in Newquay, Cornwall in the United Kingdom.

Its founder, John Vickers, a British army veteran and business consultant, launched the project in 2015. With the type of facility he had in mind (he knew even back then that he wanted to reach 50 m/164 ft and work with astronauts), there was no way this project was ever going to be straightforward.

After the Blue Abyss team announced that the construction would begin in Colchester, then in Liverpool, the team finally decided to invest £150M/$210MUSD in the Cornish Aerohub Enterprise Zone near Newquay Airport to build the giant underwater facility. As announced in a press release on June 2, 2021, Blue Abyss is currently applying for a building permit, which should be completed by the end of the year; construction will take approximately 18 months.

The Blue Abyss diving pool is announced with a surface of 50 m/164 ft by 40 m/131 ft and a 42,000 m3/11,095,226 gallon internal volume, the equivalent of 17 Olympic swimming pools and more than five times bigger than Poland’s DeepSpot. With industrial and scientific users in mind, the pool will also be equipped with a sliding roof and a 30 tonne/33 ton crane to allow large objects to be lowered into the pool.

Blue Abyss staff assure that recreational scuba divers, technical divers, and free divers will have ample access to the pool for training. However, the goal is to go beyond what publicly-accessible diving pools have ever achieved before.

The location, Cornwall, is strongly linked to the county’s dynamic aerospace and marine offshore energy industry. The connection to aerospace is so strong that  British astronaut Major Tim Peake sits on the Blue Abyss Advisory Board and acts as an ambassador of the project.

InDepth: Deep Dive Dubai—The Deepest Pool In The World Is Not A Pool

Florine Quirion is a writer, underwater photographer, and a dive travel blogger at World Adventure Divers. She dives in tropical to extreme cold waters, and selects her destinations where adventurous diving and cultural discoveries are a part of the journey.