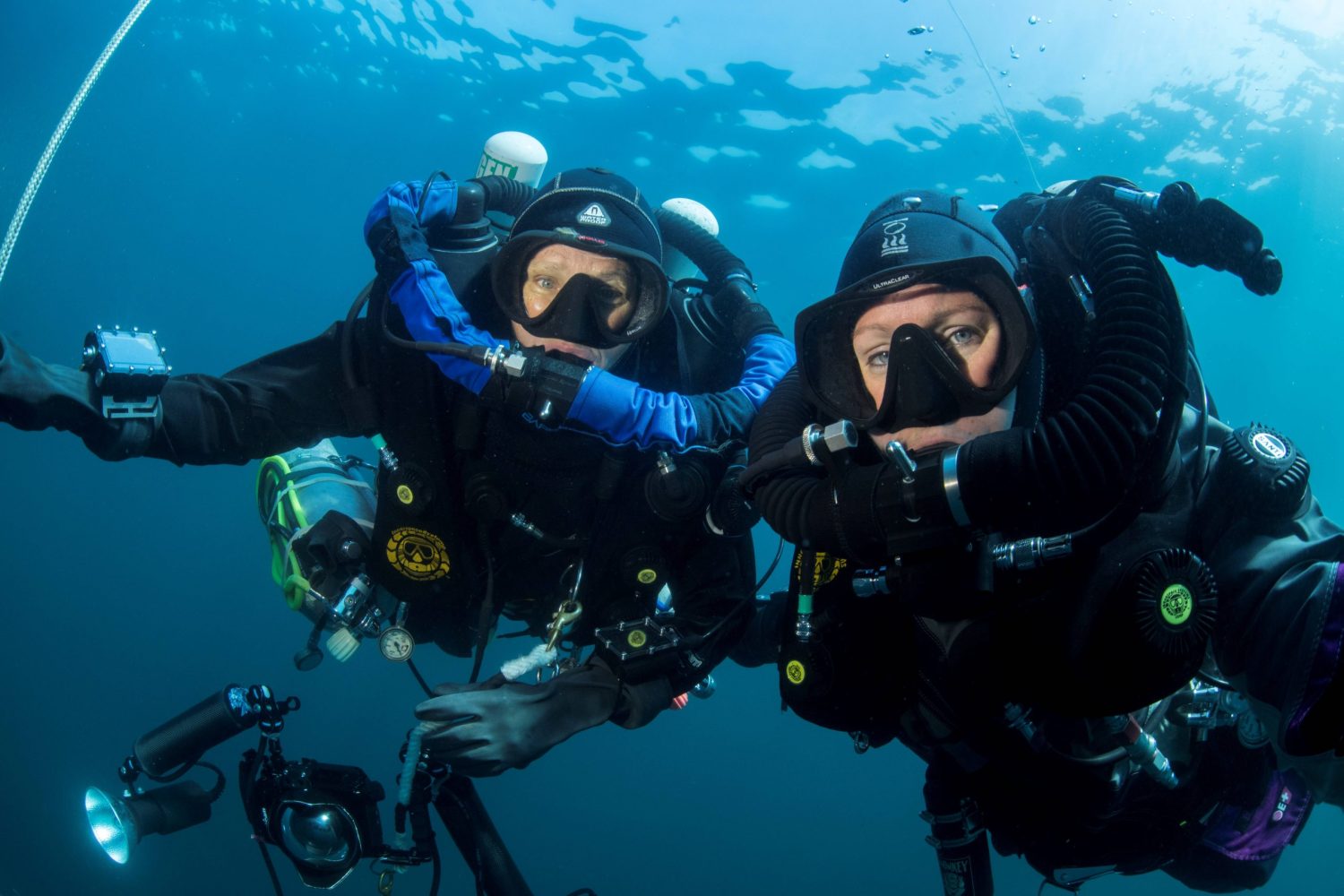 Historically, technical diving has been a male-dominated sport; however, that is changing. In fact, at this year’s Bonaire Tek event in October, there were 24 women in attendance, representing almost 30% of the attendees. Little attention has been paid to issues unique to women in technical diving. This article will address a number of these. Specifically, it will discuss the risk of decompression illness (DCI) in women versus men, changes in risk of DCI at various times during the menstrual cycle as well as the effects of oral contraceptives, pregnancy, cosmetic and reconstructive surgery, menopause, and cardiovascular health.

In an attempt to show full transparency, I am NOT a woman, and I fully understand that immediately puts my credibility into question. However, I have lots of family and friends who are women technical divers, and I reached out to them for help deciding on topics to approach. Thanks to my wife, who is a rebreather diver; our daughter, who is a rebreather instructor; Jill Heinreth, Becky Schott, Mel Clark, Jo Mikutowicz, and Rosemary “Roz” Lunn for their input.  I also heavily referenced a textbook by Caroline Fife, M.D. entitled Women Under Pressure.

The data we have on DCI risk based on gender is retrospective and inconclusive. In a paper in Undersea Biomedical Research in 1987, Zwingelberg looked retrospectively at Navy divers, 28 women and 487 men, with a combined 878 training dives with equal representations of exposures. In this study there was no difference in risk of DCI by gender.

In 1992, in Undersea Biomedical Research, Robertson retrospectively looked at 111 cases of DCI in Australia. In this report, women had a 4.3 times greater incidence in Type II decompression sickness compared to men.

In 1993, Vann reported on this issue using the Divers Alert Network (DAN) flying after diving data and published in Aviation Space and Environmental Medicine. His data also suggested that women had a higher risk of Type II decompression illness compared to men and had more residual symptoms. However, he mentioned that it was unclear if the incidence was truly higher or if there was reporting bias.

In conclusion, the differences in dive profiles in the available observational data make it impossible to draw firm conclusions regarding the effect of gender on DCI among scuba divers.

Decompression Illness and the Menstrual Cycle

A woman’s menstrual cycle is typically 28 days and is controlled by the interactions and levels among three hormones: estrogen, progesterone, and testosterone. Several retrospective studies have tried to correlate the risk of decompression illness at various times during the menstrual cycle. In 1998, Lee et al, reviewed 73 records and found 35% of DCI events occurred within the first five days of the menstrual cycle.

In conclusion, the mechanism of risk across the menstrual cycle is not known, but hormonal fluctuations may be a possible factor. And one final note – while menstruation may decrease exercise tolerance due to anemia and volume depletion, it does NOT increase the likelihood of shark attack.

Human data on the effects of hyperbaric oxygen on the fetus are limited. In 1980, Bolton reported in Biomedical Research on 109 women who dived before and during pregnancy compared to 69 women who dived before pregnancy but stopped diving once pregnancy was diagnosed. Babies born to  women who dived during pregnancy had lower birth weights, more respiratory difficulty, and birth defects, including hemivertebrae, absence of a hand, a ventricular septal defect, coarctation of the aorta, and pyloric stenosis. It should be noted that there were no birth defects in the babies born to women who stopped diving when they learned they were pregnant.

Once again, St. Leger Dowse chimed in on this issue. She reported in Obstetrics and Gynecology in 2006 on retrospective data from 1990-1992 and prospective data from 1996-2000 on 129 women who continued to dive, either purposely or inadvertently, during their pregnancy. This involved 1,465 dives during 157 pregnancies. Of note, while only 65% of women stopped diving during the first trimester of their pregnancy in 1990-1992, by 1996-2000 this number increased to 90%. For the total population, the incidence of spontaneous abortion was 14% and the serious birth defect rate was 2.7%, which is similar to the rate in nondivers.

Of course, if DCI occurs in a pregnant woman, the fetus also becomes a patient. Because of fetal blood flow, venous bubbles in the mother will be arterialized into the systemic circulation of the fetus through the foramen ovale, which could be devastating. Of note, there is no data on fetal injury related to maternal hyperbaric therapy.

There are other issues with diving during pregnancy not related to decompression stress. Pregnancy increases total body water and swelling of mucous membranes, making equalization difficult. Two-thirds of women have nausea and vomiting, or “morning sickness,” in early pregnancy. Additionally, gastric reflux (heartburn) is very common during pregnancy and is already common with immersion for any diver.

After vaginal delivery, women should refrain from diving for 21 days postpartum to allow time for the cervix to close so as to lessen the risk of ascending infection. After cesarean delivery, most obstetricians recommend refraining from diving for 4-6 weeks.

The issue for diving during breastfeeding is the risk of marine bacteria colonizing on the skin, resulting in mastitis in the mother and bacterial diarrhea in the infant.

In the early 1980s, Divers Alert Network began receiving calls about the concern of dissolved gas expanding on a commercial flight home putting stress on the seams of breast implants. In 1988, Vann reported in Plastic and Reconstructive Surgery on the results of hyperbaric followed by hypobaric conditions on a variety of saline and silicone implants. Depths were as deep as 120 ft/37 m and dives times of up to 72 hours. Then, after a 21-hour surface interval, the implants were taken to 7000 ft/2.1 km for two hours and then to 30,000 ft/9.1 km for two hours to simulate loss of cabin pressure. The implant volume increased 1.0-4.0% at the surface, 0.0-5.0% at 7000 ft/2.1 km, and 4.0-12.0% at 30,000 ft/9.1 km. Saline implants were less affected than silicone implants, all bubbles resolved over time, and the volume change was not enough to risk rupture.

Twenty-two percent of women divers making more than eight dives per year are 55 years of age or older. During menopause, women are at a much higher risk for osteoporosis than men due to a baseline lower bone density, followed by the loss of estrogen which accelerates the rate of bone demineralization. The average age for menopause is 50 years, and bone loss increases dramatically after this. Significant bone loss will be seen at 60-70 years and fractures begin occurring at 70-75 years. Thankfully, there are now treatments to blunt this bone loss. Women with significant osteoporosis of the spine should be cautious about walking while wearing scuba cylinders due to an increased risk of vertebral crush fractures.

The leading cause of death in women is cardiovascular disease. In addition, approximately 100 U.S. and Canadian divers, both women and men, die while scuba diving each year. Twenty-five percent of those over age 35 have a cardiac cause. While the risk for cardiovascular death is quite low in premenopausal women, after menopause, the risk for women quickly becomes comparable to that of men. As a result, all women, like their male counterparts, should be vigilant in controlling the risk factors for cardiovascular disease, emphasizing blood pressure and cholesterol control, screening for and treating diabetes, and avoiding smoking in addition to exercise and weight control.

Douglas Ebersole, MD, is an interventional cardiologist at Watson Clinic in Lakeland, Florida, and the Director of the Structural Heart Program at Lakeland Regional Health. He is also an avid technical diver, cave diver, and CCR trimix instructor, as well as cardiology consultant to Divers Alert Network (DAN).

My Journey Into Spearfishing