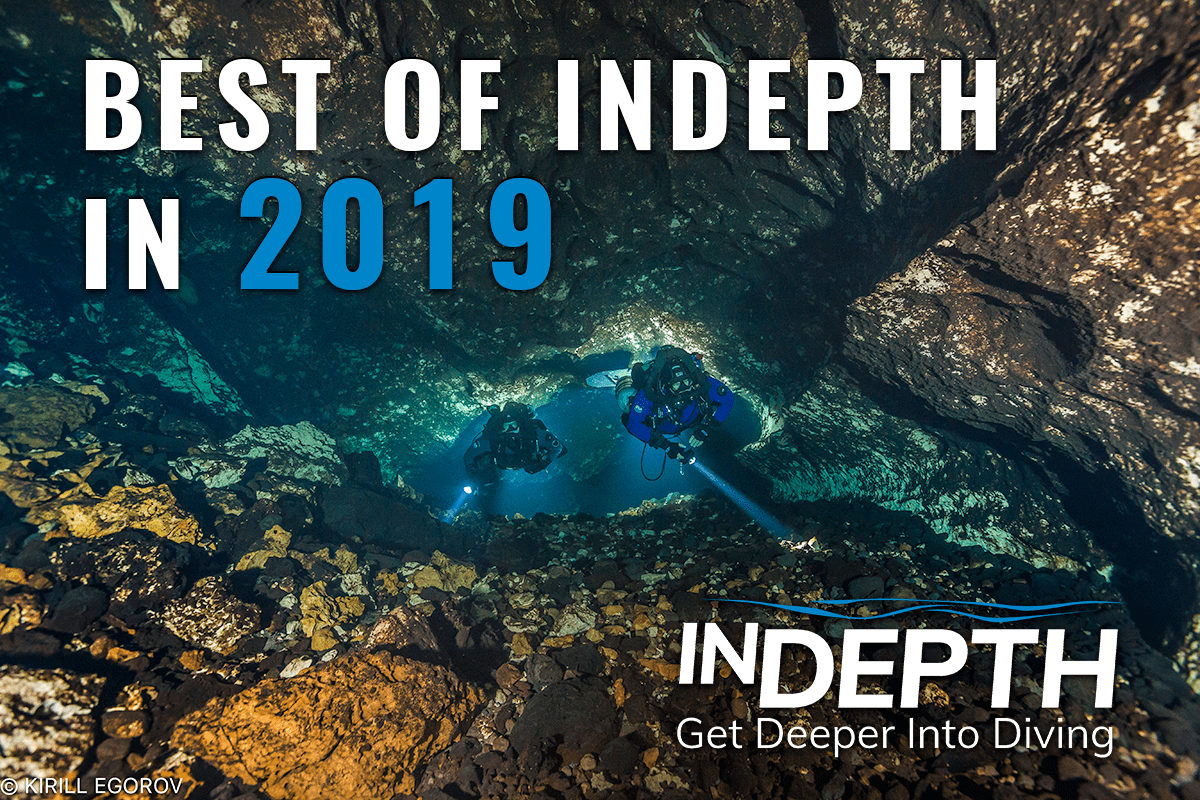 InDepth just completed its full first year as a blog, and what a year it has been! Over the year, we’ve published 92 stories covering exploration, diving science and medicine, technology, education, conservation and technical diving culture. We would like to take this opportunity to thank all of you, our readers, for your interest and support, and also thank our illustrious contributors who made the blog possible. To celebrate our first year, we wanted to look back on the most popular stories of the year. Here are the Ten Most Read Stories of 2019.

World-recognized decompression physiologist and cave explorer David Doolette explains the new evidence-based findings on “deep stops,” and shares how and why he sets his own gradient factors. His recommendations may give you pause to stop (shallower).

2. How Deep is Deep? The 20 Deepest Tech Shipwreck Dives and How They Compare to Dives in the 1990s

The advent of mixed gas technology in the late 1980s/early 1990s followed by the introduction of closed-circuit rebreathers a decade later has enabled technical divers to explore increasingly deeper shipwrecks. How much deeper?Here InDepth editor Michael Menduno examines the 30 deepest technical shipwreck exploration dives as viewed today, including who did them and how, compared with the 10 deepest dives from the 1990s. The results will likely amaze you. One data point: The deepest wreck dive in the 1990s, that being the SS Edmund Fitzgerald, aka ‘The Fitz,” laying at 529 ffw/162 mfw, is now #11 when viewed from today. That is to say that the top 10 deepest shipwreck dives today were all conducted after 2000.

3. Decompression, Deep Stops and the Pursuit of Precision in a Complex World

In this four-part series, Global Underwater Explorers’ (GUE) founder and president Jarrod Jablonski explores the historical development of GUE decompression protocols, with a focus on technical diving and the evolving trends in decompression research.

In this five-episode equipment series, GUE Instructor Dorota Czerny discusses the differences between a GUE-configured equipment set, consisting of a single tank, backplate, harness, wing, and long hose regulator system, and a jacket-style system that is most common in recreational diving. The comparison covers general components and goes into detail about streamlining, fit, and function; weighting options; managing out-of-gas situations in the two regulator configurations; and offers some advice for GUE-trained recreational divers.

What is your best option if you or a team-mate get bent at a remote diving location, that is more than two hours from a chamber? If you are prepared—that means having the right equipment and know-how—the new consensus among the hyperbaric docs is to treat with In-Water Recompression (IWR).

If you don’t know much about immersion pulmonary edema (IPE) have a read! This not-well-understood disorder is on the rise and can not only effect tech divers, but seriously ruin your day if you’re unaware and unprepared to deal with it. DAN. Tekkie Reilly Fogarty has the deets!

7. No-Fault DCI? The Story of My Wife’s PFO After She Kept Getting Bent

What does it mean if you keep getting bent, even when you follow all the rules? Avid tech diver James Fraser recounts his and his wife’s Deana journey of discovery that led them to realize she had a PFO. Does any of this sound familiar? Read on!

8. How Record-Breaking Scuba Dives are Hurting our Sport

The recent death of 41-year-old technical diver, Sebastian Marczewski, aka “Iron Diver,”
during a failed attempted world record scuba dive to 333 m/1093 ft in Lake Garda, Italy, highlighted the dangers of deep diving record-setting. The tragedy occurred just after GUE instructor Dimitris Fifis had penned an opinion piece for InDepth exploring the nature and motivation of deep diving record-setting. Fifis explained that he wrote the post in order to get a better personal understanding of what motivates divers to set deep diving records. His post was motivated in part by the deaths of two other technical divers attempting deep records. Here are his thoughts and suggestions.

10. Incident Report: Lost in a Cave

How could four experienced divers get lost in a cave? Human nature got in the way. Human factors pundit Gareth Lock analyzes the factors that led to this “Oh S***” moment and how they might apply to your diving; they are much more common than you think.