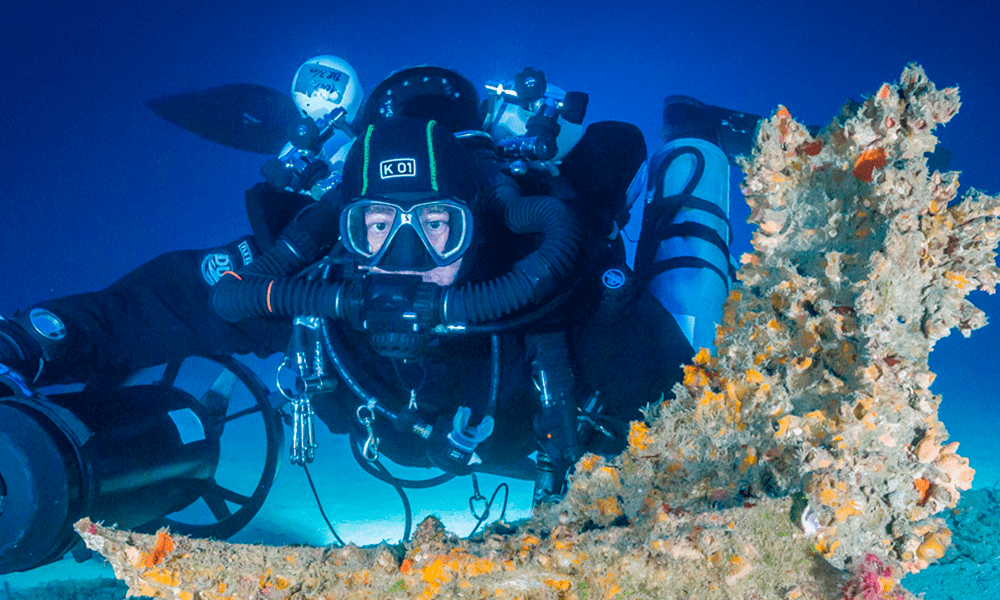 Kirill Egorov is an avid underwater explorer. He has been part of Global Underwater Explorers (GUE) Mars the Magnificent missions, the USS Atlanta, and the Battle of the Egadi project in Italy to name just a few. Not only is he an accomplished technical and cave diver and instructor, but he is also a talented underwater photographer. Kirill currently lives in High Springs, Florida, where he cave dives regularly. “I love sharing amazing places and things I see with other divers and non-divers,” Kirill said. “The other exciting opportunity is to document wrecks and caves, and preserve their current state, at least in the form of photos.”

One cool aspect that Kirill enjoys about being a photographer is being useful on projects by blending his skills as a diver and his skills as a photographer. He contributes photos that then can be shared and used for documentation, identification, and conservation. Of all the places he has photographed, his two favorites are: Mars the Magnificent, and the Twin Dees/Weeki Wachee cave system.

But, Kirill isn’t the first artist in his family.

“As my granddad was an avid photographer, and my father is an artist and a semi-pro photographer, I have attempted land photography at different points in my life. During the ‘archaeological’ part of my life, macro photography and backlight contrast photography were a big part of what I was doing (while primarily studying Viking Age textiles). I only made the decision to start playing with underwater photography in late 2013. I never planned to get that seriously into this as a hobby.”

Outside of his family, Kirill has drawn inspiration from other underwater photographers like Becky Kagan Schott, Pete Mesley, and David Rhea. “Their photos were the reason for me to start learning underwater photography, and they keep inspiring me to learn further,” he said.

For Kirill, one of the hardest elements of underwater photography is communicating with models and trying to convince them to do what he wants. “I am lazy, so if I need to work too long on photos after I have taken them, I typically do not. So I try to use a ‘film’ approach—every photo has to be good at the moment it is taken.”

In the future, Kirill would like to dive caves and wrecks that are less travelled and capture images that are useful to researchers, and of course beautiful to look at.

The Data: Diving for Antibiotics